Norwegian Embassy: A case of treading lighter on nature’s resources

A combination of low-capital initiatives by the management, maintenance policies and a clear vision that have made the Norwegian Embassy into a good learning specimen

Climate change has moved beyond the realms of scary future predictions and into our lives where temperature rise has compelled record books to be rewritten each year. In 2015, the world committed to stop the global rise in temperatures at 2° Celsius above pre-industrial levels, and soon realised that anything beyond a rise of 1.5° Celsius would be disastrous.

Global warming has increased the frequency of extreme weather events making them the new normal. These make cities more vulnerable to disasters such as flooding because of sudden heavy downpours, which choke the storm water systems. This brings into focus the inadequacy of our infrastructure and building practices in the face of climate change.

The 1.5° C target is yet to be revised or accepted. Meanwhile, rise in global temperatures combined with increasing density of our cities create a heat island effect — heat getting trapped in urban areas.

This phenomenon has thrown our thermal comfort into jeopardy, with people flicking the switch to let cool air flow through the energy-guzzling air conditioners. Higher energy consumption is linked with higher carbon emission, which is responsible for worsening air pollution and the rise in global release of greenhouse gases, thus putting us in a loop. On the contrary, our resource consumption remains largely linear with use-and-throw policies.

The cooling demand is set to go up eight times by 2037 in India and the Cooling Action Plan aims to bring down the energy associated with this demand.

New Delhi-based non-profit Centre for Science and Environment’s (CSE’s) sustainable habitat programme advocates “comfort for all”, and a passive approach to cooling above mechanical ones. The programme also pushes for circularity of resources such as waste, energy, water, etc to reduce the stress on virgin resources.

CSE’s training centre — the Anil Agarwal Environment Training Institute (AAETI) — has worked on the idea of what “green” means in terms of a campus and has tried to gather learnings of what works and what does not. CSE is on the lookout for more such campuses that demonstrate resource-prudent practices. This case study showcases one such “sustainable campus” to bring a learning curve for others to adopt.

The Royal Norwegian Embassy in India was set up within a few months after India became a Republic. The embassy functioned from a barrack on Humayun Road in the 1950s before moving to Prithviraj Road until mid-1960s. The current embassy building is situated among the lush green landscape of Chanakyapuri.

The embassy compound is an amalgamation of modern design aesthetics combined with locally sourced materials that respond to the environmental concerns of Indian cities. The campus, initially made in 1980s, has gone through multiple transformations.

The latest one, completed a few months ago, was developed with the clear aim to reduce resource consumption. Even though the environmental challenges of 1980s were very different from now, the building shows a way forward — how careful retrofitting and correct planning can help adapt buildings for the challenges that we face today.

Energy, as a resource, is consumed by the building throughout its operational life and many factors such as shading, materials and even finishes and colours play a role in reducing the operational energy usage.

Delhi provides a challenging context to build in, its summer can be sweltering hot with the temperatures rising to 45 degree Celsius while the winter temperature can fall to near zero. The embassy building has prioritised simple yet effective techniques to utilise the natural resources of sun and earth.

As one enters the reception area, one is greeted by the daylight that pours in from the windows placed high above in the room. The placement of the windows closer to the ceiling improves the daylight penetration into the space.

Daylight's path is further complemented by the light colour of the finishes used in the interiors of the lobby, which reduces the absorption and improves the reflecting daylight, thus reducing the need for artificial lighting.

Additionally, the common areas of the buildings have been equipped with sensors that are set to turn off the artificial light when the space is unoccupied, cutting down wastage. 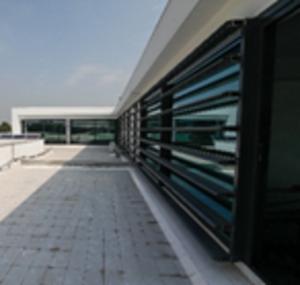 Double glazed glass is used which cuts down heat ingress, this reduction in direct and indirect heat leads to saving electricity consumption due to air conditioning.

The embassy uses 200 mm thick Autoclaved Aerated Concrete blocks for its external walls, which are lighter than other brick technologies and are superior in keeping the heat out of the structure. The insulation value is in compliance with the 2017 Energy Conservation Building Code.

The energy cost is further dented as the air conditioning itself has been made more efficient with the use of geothermal wells. These wells, 30 in number, take advantage of the relatively stable temperatures under the surface of the earth.

The water in geothermal wells travels 100 feet into the earth and uses it as a sink to eject the heat produced by the HVAC system. This process makes the air conditioning system more efficient, saving on water and energy. Hot water requirements of the compound are met by 19 solar heaters, each capable of heating up to 180 litres of water at once.

Apart from the energy conservation features, the campus also generates its own electricity by harnessing energy of the sun using photo voltaic cells over the building’s rooftops. The building has an installed solar power generation capacity of 25 kilowatts (KW) which is sufficient to offset about 17 per cent of the campus’s energy demand. The campus produced 23,730 kilowatt hour (KWh) of energy in 2018 through solar photo voltaic cells.

The importance of water conservation and management cannot be overlooked as Delhi is situated in a water-stressed region. CSE’s emphasis on circularity of resources finds a physical manifestation in the embassy’s in-house Sewage Treatment Plant (STP) that recycles the waste water produced.

The STP has the potential to treat up to 30 kilolitre waste water generated in the campus daily. The campus currently treats 20-35 per cent of its waste water and reutilises it for irrigation purposes. The embassy building seems to capture the philosophy of “catch it where it falls” when it comes to rain water. The campus has both rainwater storage tanks as well as rainwater harvesting pits that allow water to be stored and seep back into the ground.

The irrigation system is designed in a way that minimises evaporation losses that can happen due to excessive water being poured, the compound uses a combination of sprinkler system and drip irrigation systems to cover the green areas of the campus.

Majority of the trees planted inside the campus are native in origin. Native trees are generally more resilient and adaptive to local climatic and soil conditions, and hence require less attention and resources such as water.

The tree density in the campus has an additional benefit — the natural purification mechanism of the trees has contributed to improvement of air intake of the building. This air is further treated by mechanical systems to bring the toxic external air quality into permissible limits within its interiors.

The embassy by itself uses two electric cars and a policy is set in place to ensure that the new fleet of vehicles bought by the embassy would be electric or hybrid once the current stock of cars become obsolete.

As the city battles with the problem of solid waste disposal and rising mounds of landfill accompanied with shouts of “not in my backyard”, the embassy has made this as another area of its focus. There are initiatives to reduce the waste production as well as recycle the waste that is produced.

Five different colour coded bins can be found in the campus that make it easier for on-site segregation. The embassy has tied up with two agencies which are responsible for the management and recycling of the waste produced.

In total, the embassy had recycled waste from seven categories — aluminium, cardboard/paper, copper, glass, iron, plastic and wood. These accounted for the recycling of over 65,000 kg of waste produced in half a year and saved over 14,000 kg of carbon dioxide (CO2)emissions.

The embassy’s attempt is sensitive towards multiple problems that plague the urban environment of this region. Resources are treated prudently keeping the needs of the future in mind. Physical infrastructure has played a major part in this greening effort.

However, it has also been a combination of low-capital (whole Life Cycle based) initiatives by the management, maintenance policies and a clear vision that have made the Norwegian Embassy into a good learning specimen for other campuses to follow in the pursuit to tread lighter on the earth.