Lack of ecological concerns among today's professionals have led to a dichotomy between development and the environment. 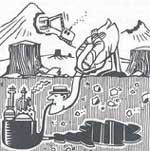 Contemporary environmental consciousness and concern among professionals in the West was triggered off by Rachel Carson's Silent Spring, which was published in 1962. Summing up the disastrous impact of chemical pesticides on ecological cycles, she said in the book, "The chemical barrage has been hurled against the fabric of life... a fabric on the one hand delicate and destructible, on the other, miraculously tough and resilient, and capable of striking back in unexpected ways. These extraordinary capacities of life have been ignored by the practitioners of chemical control who have brought to their task no 'high-minded orientation', no humility before the vast forces with which they tamper."

'High-minded orientation' and 'humility before the vast forces with which they tamper' are hallmarks of professional calling. Compromise on these principles by professionals connected with development, is at the heart of development-induced deterioration of the environment. How has this come about, what is the situation today and what can be done are the major questions now. But let us begin by defining the concept of a profession.

Professions had their origin in the creative instinct, personal discoveries and in the cultivation of excellence, which evolved into organisations around families, castes, guilds and organised undertakings in specialised fields. Traditional professions in their close-to-nature practice had an ecological context and discipline related to this. Today, professionals as decision-makers and evaluators of the exploitation and restoration of natural resources also have a role to play in relation to environment.

It would only be reasonable to expect a high level of concern and endeavour by professionals regarding ecological matters. Unfortunately, this is not the case. Professional attitudes today are marked by lack of in-depth knowledge, indifference, hostility, scepticism and even cynicism. Ecology and modern development have come to be seen as antithetical to each other. Professionals seem to have decided to get on with development, and leave ecology to take care of itself.

One can think of several explanations. The first is related to the training of professionals, which is narrowly specialised, without a synoptic view and, till recently, devoid of environmental studies. In project and enterprise design and management, economic and financial considerations are dominant. Even when environmental aspects are required to be considered, weak enforcement mechanisms permit their being ignored, provided a suitable price is paid.

Most professionals are content to follow the leads and directions provided by the state or the corporate sector. These are, by their very nature, remote from reality and have their own priorities and perspectives on ecological issues.

Part of the explanation also lies in the manner in which ecological concerns have emerged in public consciousness. Given the seriousness of the threats and dangers, the expression has often been aggressive, polemical and alarming, usually aimed at the policy-makers and public rather than at professional peers. As such it has been shunned and misunderstood by professionals.

Ironically, it is to the professional stalwarts that the present-day environmental thinking owes its insights and integrity. In the West, scientists and technologists like Rachel Carson, Paul Ehrlich, Berry Commoner, Lewis Mumford, Barbara Ward, Dennis Meadows and E F Schumacher pointed to the emerging threats and serious deterioration. Even in India, there were scholars and planners like Radhakamal Mukherjee, J C Kumarappa, Patrick Geddes and Verrier Elwin, who may justifiably be regarded as pioneers in ecological thinking.
Notwithstanding excuses for the lack of professional response to the challenges posed by ecological deterioration, the problems have continued to multiply. The early warning signs posted by publications such as The Silent Spring and Limits to Growth (Who has written this?) were initially ignored. Though the industrialised nations brought in some measure of environmental protection in their own countries, they continue to export highly polluting industries and hazardous wastes to the Third World.

At the same time, command systems of the global economy have continued to promote policies to counteract the realities of global warming and ozone layer depletion. Also, an independent body like the World Commission on Environment and Development has had the courage to declare that the ongoing development trends are not sustainable. The report of this commission, called Our Common Future, finally set the alarm bells ringing.

The Rio conference in June 1992 saw the culmination of all official and unofficial activity. This gathering clearly demonstrated that ecological issues cannot be wished away. It is here that the role of professionals gains renewed importance in dealing with ecological issues, ranging from those related with specific projects to ones at national and global policy levels.