Lands under estuarine agricultural system, called Khazan farming, are in state of decay 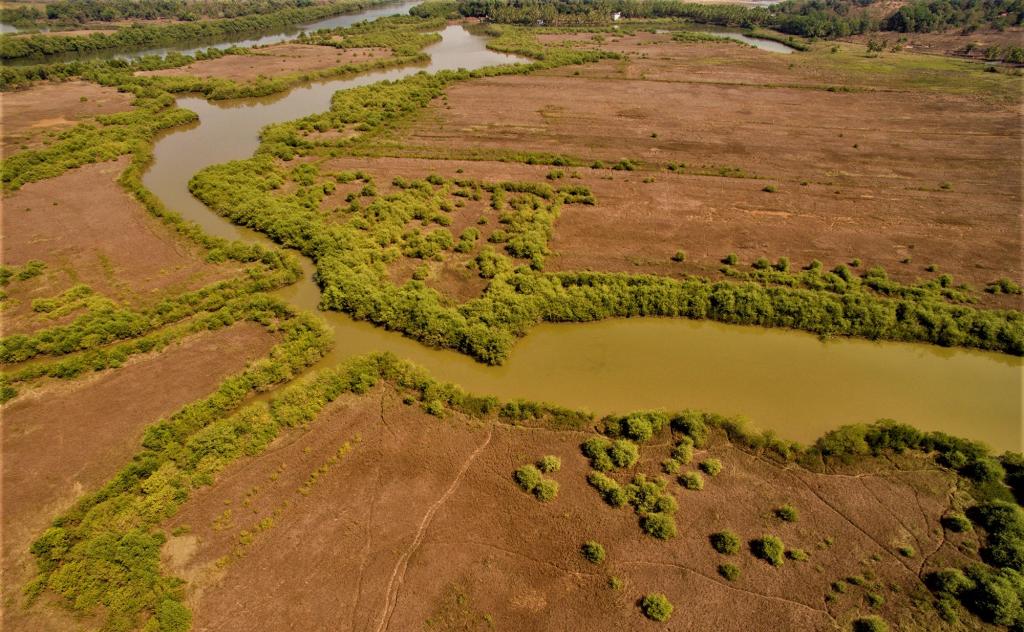 The Salim Ali Bird Sanctuary is Goa’s smallest protected area — it comprises barely two square kilometres of lush mangrove forests. The sanctuary is located on Chorão, one of Goa’s estuarine islands in the Mandovi river approximately five kilometres from capital Panaji. This little gem of a mangrove park receives its fair share of visitors, primarily birds.

But this ecosystem supports much more. The sanctuary and its surrounds is home to marsh crocodiles, smooth-coated otter, the unique glossy-marsh snake that feeds on crabs, mud lobsters, sap-sucking sea slugs, among others.

A walk on its nature trail will take one through an almost meditative patch of Indian mangroves (Avicennia officinalis) characterised by their thick, white trunks. All one hears is the clicking sounds of the pistol shrimp and the hum of the ferry boats that bring passengers to Chorão, and whose raucous jetty is near the sanctuary’s entrance.

It may come as a bit of surprise to know that the sanctuary’s “primeval” forest until the 1970s was still largely privately owned rice fields. The sanctuary represents a conservation success in many ways, demonstrating that even degraded spaces (in ecological terms), if given sufficient time, can restore themselves to their former glory.

In fact, the sanctuary, like most other low-lying floodplains of Goa, was characterised by an estuarine agricultural system called Khazan farming. This system is a carefully designed topo-hydro-engineered agro-aquacultural ecosystem mainly based on the regulation salinity and tides.

Centuries ago, people in this region reclaimed low-lying brackish coastal floodplains and mangrove forests. They constructed bunds using locally available material to prevent the ingress of salt water, which killed the halophilic mangroves.

To control the flow of tidal waters, they built openings in bunds fitted with sluice gates. These gates acted as one way valves, allowing water from the main backwaters to enter the specially dug channels (poiems) around the fields. These channels would fill in with the oncoming tide and bring with them fish, crab and shrimp, and the gates would automatically shut when the water level was equal on both sides.

This prevented the water from overflowing into the fields used to grow paddy and which has a low tolerance to salt. When the tide receded, the sluice gates would open outwards automatically, allowing the water from the poiems to drain out. During this time, a bag net was set at the sluice gate to catch fish that had entered in earlier.

Everything has a place in the system — while well-managed khazan lands would not have mangroves growing within them, they were allowed to continue to flourish along the outer banks of the bund and the banks of the backwater or the estuary, because their significance for artisanal fisheries as fish nurseries was well understood.

Every bit of space was precious and used efficiently — the bunds were used to grow a variety of vegetables. The Khazan system allowed for the farmer and the fisher to harmoniously coexist and was the key to sustaining what is considered Goa’s staple — fish, curry and rice.

Although the Khazan lands had a diverse set of owners which included government, religious bodies, private holders, the most dominant form of Khazan land tenure pre-1961 was that of the Communidades. These were community lands collectively owned and managed by the Communidade of a given area. Their management involved a number of tasks which included the construction, maintenance and operation of bunds and sluice gates, the leasing of farming and fishing rights and instituting penalties for the breach of rules among many others

Today, for various reasons, but primarily due to post-independence agrarian reforms of 1961, these lands largely lie fallow and are in a state of decay. Lack of cultivation and maintenance of the bunds and sluice gates is leading to their breaching and the natural reclamation of these fallow lands by mangroves.

While several regions around the world have witnessed precipitous decline in their mangroves, their decline is witnessing an increase in Goa, according to data published by the Forest Survey of India.

Moreover, mangroves are protected by law and it is illegal to cut them. Areas that have these trees growing on them also come under the purview of coastal regulation zone (CRZ); according to the 2011 notification, the mangrove areas are classified as CRZ I and cannot be developed upon.

Many of Goa’s communities look at this as a threat to the future of food production. This has led to the illegal and, often unnecessary, destruction of mangroves, with patched often being cleared under the metaphorical cover of darkness.

In a bid to restore Goa’s agriculture, the water resource department took up the job of repairing the breached embankments. A far cry from the indigenous materials and methods employed, the previous mud-laterite-straw bunds were replaced by concrete ones, building them much higher and wider than they were earlier.

However, it is the failure to understand that it is not new technology, rather well-organised communities that keep this system thriving, has not resulted in any change in the status quo. While these concrete bunds were successful in preventing salt ingress and killing the mangroves, many fields that were intended to be restored continue to remain inundated with dead and leafless mangrove stumps.

Lack of community land use and bund maintenance has led to these concrete bunds being misused. Built to withstand the test of time, they are now falling apart in many areas and the mangroves are making inroads into the fields once again.

The fields, which once fed entire communities, are languishing as salty waste lands. The concrete bunds lying in a state of misuse have led to a whole range of other collateral impacts.  Many of them are broad enough for vehicles to drive on them, allowing anglers and revellers access pristine spots they could not access earlier.

Many of these areas are now littered with beers bottles and garbage that is usually a sad by-product of the modern consumer. Another issue is that the fields have been lying fallow for too long, and are being treated as waste lands.

Some recommendations include converting Khazans to other forms of land use, bringing them under more profitable intensive aquaculture that threatened these lands in the 80’s and 90’s, but was later brought under some control. Some Khazan areas are being filled with earth and concrete debris illegally in a bid to prep them up for construction works.

With the ongoing novel coronavirus disease (COVID-19) pandemic, Goa is witnessing a spate of community-led farming initiatives. People who have never farmed before are getting their hands and feet dirty and many fallow lands are being cultivated.

It would make sense acquainting ourselves with this unique system developed and fine-tuned over the centuries by our ancestors through continuous tinkering. We really have a whole wealth of knowledge to fall back on. Building up from here rather than reinventing the wheel would be the way to go.