Human-Croc conflict: Lessons from Down Under

As crocodilians (Alligators, caimans and true crocodiles) re-wild former ranges globally, Australia’s model of croc management and peaceful coexistence should be of use to other countries, including India 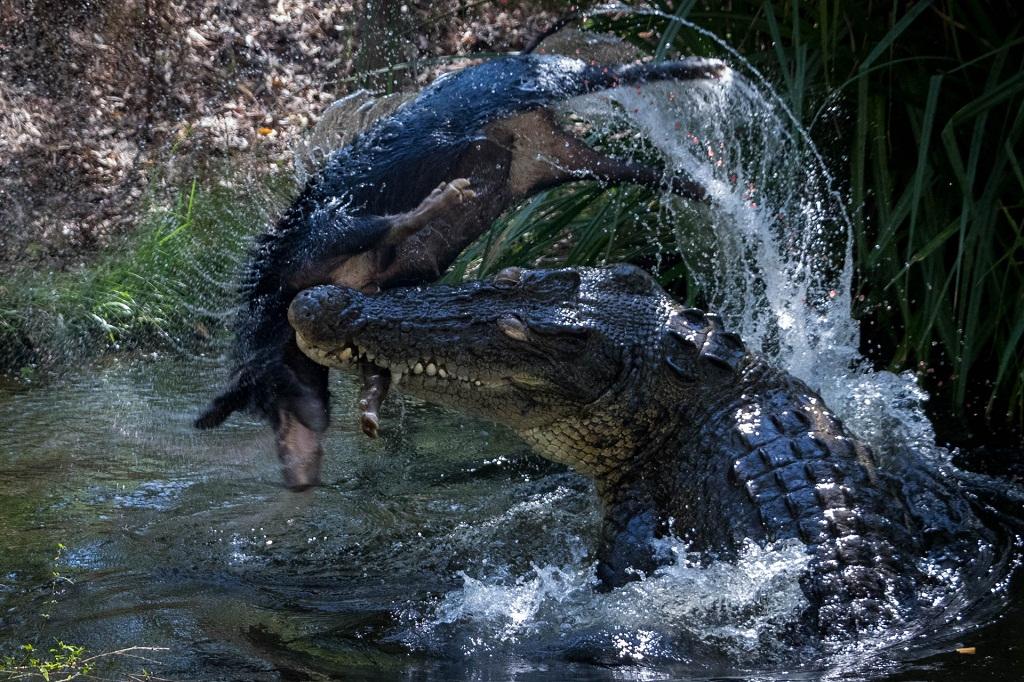 A male Saltwater Crocodile thrashes a feral pig carcass to tear it into pieces in a billabong in the Top End, Australia Credit: Adam Britton

You might have noticed an increase recently in news reports about crocodiles turning up in unusual locations, places where they haven’t been seen for years, or at least where they weren’t expected. Such reports usually imply that crocodiles aren’t supposed to be found there, and that something unusual is happening. It might surprise you, then, when I tell you that the opposite is true: it was the absence of crocodiles from these places that was unusual.

Australia illustrates this point well. Its northern rivers support the highest populations of wild saltwater crocodiles (Crocodylus porosus) in the world. Since they were protected in the early 1970s, their recovery has been legendary, returning to their former abundance in river systems across the north within the space of a few decades. After this, like any container that has reached capacity, crocodiles have spilled out from their preferred tidal river habitats into both, upstream freshwater and coastal marine habitats in search of places to live. Such individuals might not have the best habitat available, but crocodiles are both resilient and adaptable and seem happy to turn up in unexpected places.

The word “unexpected”, though, depends on your perspective. There is nobody left who remembers when crocodiles were widely distributed and abundant a century ago. Australia’s older generation grew up at a time when crocodiles had been largely eradicated, when it was relatively safe to go swimming in the nearest river. It was an artificial situation created by uncontrolled hunting, and now that crocodiles have moved back into their old homes, it has created a divide between people who feel their freedoms have been curtailed, and those who welcome crocodiles for their economic, ecological and social value. It is no surprise that media stories emphasise the “invasion” of crocodiles back into their former haunts, because some have lost their perspective of the natural world. Humans have modified nature—in this case removed crocodiles—and yet we are upset when nature recovers and brings herself to our door.

There have, of course, been many changes since crocodiles were last found in abundance across northern Australia. We’ve modified habitats, we’ve changed the amount of food that’s available, we’ve introduced feral animals and weeds, there’s pollution and changing climate, and moreover there are a lot more people competing for the same resources that crocodiles need. This has inevitably led to more conflict, both perceived and actual. In reality, the number of people bitten and killed by crocodiles is still relatively low. It pales in comparison with many more common forms of mortality, but the perception of risk that crocodiles pose, and the sheer horror many feel about potentially being eaten by a large reptile are enough to amplify these concerns well above their weight.

Australia is certainly not unique in this regard, and a similar situation is playing out in India’s Andaman Islands. Of course the details differ, but the overall result is the same kind of conflict between people and wildlife, and a headache for government agencies trying to address it. The best way to start is to recognise that it exists and work towards a compromise that both recognises people’s understandable desire to feel safe, but also the value that crocodiles bring through direct economic means, through indirect ecosystem health benefits, and through intrinsic cultural associations.

There’s no simple solution to the problem of human-crocodile conflict, because each area presents its own unique set of variables, but we do have a large amount of data that can guide us. The CrocBITE project (of which I am a part) was established in 2011 as a way of gathering, collating and interpreting crocodile attack incidents from around the world to allow researchers open access to find some answers. With over 4,500 records dating back over 200 years (although most from within the last decade) some patterns can be seen, areas where risk is the highest, even demographics that are most vulnerable depending on how they access water. For example, in countries where access to the water is a necessary part of life (for example, subsistence fishing) you cannot simply tell people to stay out of the water unless you offer them alternatives, or at the very least information on how to minimise risk. For example, in some countries, “crocodile exclusion enclosures” can be effective in allowing access to water while keeping crocodiles out. In other cases, data reveal high risk areas that can be avoided at specific times of year. In areas where access to water is mainly recreational, education and awareness of crocodile risk have been demonstrably effective in keeping fatality rates low. Australia has also seen success through the targeted removal of individual crocodiles with a higher risk of attacking a person. This small scale “cull” seems to be effective whereas a larger scale cull may have the undesirable side-effect of increasing risk by encouraging greater access to water.

Crocodiles have lived in these waters for millions of years. They’ve become an integral part of their respective ecosystems. Removing them entirely would undoubtedly have consequences, not all of them desirable. But if we want to benefit from having them around, we need to learn to live alongside them. Humans have done so successfully for a very long time, but nothing is ever perfect. Accidents happen, people take risks, often in order to survive, occasionally because they make the wrong choices. Australia’s experience with crocodile management shows us that human-crocodile conflict can be kept to a minimum while keeping crocodiles around, although it doesn’t mean that pressure to remove wild crocodiles does not still exist. People are understandably afraid of crocodiles, but that doesn’t mean we can’t find a way of coexisting for a long time yet to come.