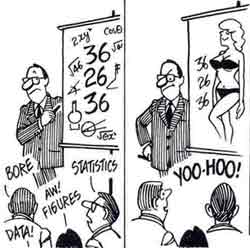 WITH THE claim of having the world's third-largest scientific humanpower, India should have at least three flourishing periodicals with countrywide circulation disseminating science at the popular level. But that is hardly the case.

Newspapers fare no better in reporting science news or features. Very often, what they report is only a third- or fourth-hand account of a report from Western newspapers. Sometimes, the reports are muddled or factually incorrect. And, the total science coverage is of the order of a meagre 5 per cent! Exact figures are available from a survey by the National Council for Science and Technology Communication (NCSTC), but they hover around 5 per cent. The NCSTC, however, found that Hindi papers fare better than English papers in science reporting.

The entire science-writing scenario in India is somewhat topsy-turvy. Perhaps a good look at the problem would be beneficial.

First, who are the readers of popular science? We can point to the "educated elite" with a readership ranging from secondary school students to post-doctoral scientists. Among the educated laypersons, too, there is a wide cross-section of adults who are curious about science. This can be judged by the large numbers that turn up for a good public lecture on science or for a well-organised science exhibition. Surely, the numbers are large enough to sustain popular science journals in English, Hindi and other languages.

There are several awards and other forms of public recognition to promote popular science writing. Several voluntary organisations, professional societies and associations as well as the government -- local, state or national -- institute awards to encourage science writing. For the enthusiast in science writing, there is no dearth of incentives.

The success of television serials like Carl Sagan's Cosmos has shown that various media forms can be used to popularise science. There is sufficient scope for a science writer to exercise his talent. Yet, science writing has not really caught on.

Successful foreign popular science journals like the New Scientist (UK) and Discover (USA) show that good expository articles written for a general readership demand a thorough understanding of the subject and a willingness to come down from the technical level. The problem lies in combining the two attributes.

Some of our scientists have scaled the heights of research at the international level and dealt with the subject first-hand, often at the frontier level. They are ideally suited to talk about their excitement and motivation. Yet, not many of them are willing to spend a little time explaining their subject to the layperson. The few who do are often viewed by their colleagues with derision, implying they must be past their productive phase in research if they are able to find time for science popularisation.

Thus, at the level where pathbreaking research is being done, there is apathy towards popularising it. On the other hand, there are several enthusiasts with a flair for popular writing but who do not posses the depth of knowledge to generate a credible article.

Such difficulties may be eventually overcome if scientific organisations, academies, university science departments and research institutes make a conscious effort to bridge the gap between research and its popularisation. If scientists like Faraday, Jeans, Eddington, Bragg, Porter and Hoyle in the UK could sustain high-quality research and also contribute to science popularisation, why can't our top scientists also have a go? Similarly, the UK has a tradition set by writers like Nigel Calder, John Maddox and John Gribbin who, while never laying any claims to high-quality research, take pains to learn about it and explain it to the layperson.

Perhaps occasional dialogues between creative science brains and those with a flair for writing may help.

Jayant Narlikar is the director of the Inter-University Centre for Astronomy and Astrophysics, Pune.