Your pet is not as smart as you think

A simple research by a New York scientist shows how

If you have ever had a pet dog, it is most likely you have thought of it as part of the family and have been witness to many instances of human-like behaviour by your pet. One of the greatest problems that any ethologist, behavioural ecologist or animal breeder faces is to consciously avoid the anthropomorphizing of animal behaviour. Yet, for some scientists, such explanations can act as a pool of questions that demands attention, and forms the starting point of interesting research.

Alexandra Horowitz, a psychologist at Barnard College in New York was intrigued by one such idea: the guilty look of pet dogs. It is a general belief, among dog owners and non-owners, alike, that dogs understand guilt: they are aware of a code of conduct, and when they stray from this code, they look guilty. Several scientists too have attributed dogs with the ability to feel guilty because of a misdeed. Horowitz wanted to understand if dogs really have a sense of guilt.

Nine behaviours associated with the guilty look were identified from questionnaires filled by the owners: avoiding eye contact, lying down and rolling to the side or onto the back, dropping the tail, wagging low and quickly, holding ears or head down, moving away from the owner, raising a paw, and licking.

Horowitz tested six male and eight female domestic dogs of different breeds for her experiment. The owner had to show the dog a biscuit it is fond of, forbid it from eating the treat and put the biscuit on the floor, out of reach of the dog but in its view. The owner then left the room, and on returning received a report on the dogs behaviour in his or her absence. While the owner was away, the experimenter (present throughout with a video camera) either took away the treat or offered it to the dog. On returning, owners were either told the dog had obeyed and not eaten the biscuit or it had disobeyed. They were asked to greet the dog if it had obeyed and scold it in case of disobedience. In half the trials the owners were misinformed about what their pet did. 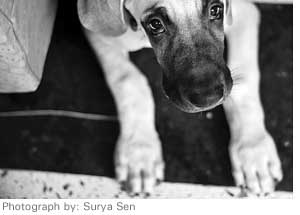 As expected, in several cases, owners identified the guilty look of their pets. The results of the analysis came as a bit of a shock to them. The behaviour of a dog was not affected by whether it had obeyed the owner. Owners identified equal numbers of guilt associated behaviours when the dogs had indeed disobeyed the command and when they had actually obeyed and had not eaten the biscuit. The guilty look was more likely when the dogs were scolded in spite of having obeyed the command (because the owner had been misinformed).

Horowitz concludes it is the behaviour of the owner that the dog reacts to when it appears to look guilty, and it is not the feeling of guilt itself. Given that discovery of, say, a stolen pot roast or garbage on the floor is often followed by instant cries of alarm and scolding, explains Horowitz, it is not surprising owners would conflate the sources with the dogs resulting guilty looks.

The pet owner in you might feel let down by the realization your dog is not really as smart as you would like to believe it is. But, as Horowitz suggests, the experiment does not rule out the possibility that dogs may experience guilt but demonstrates the behaviour we attribute to the realization of guilt is just the dogs reaction to human behaviour. As a behavioural biologist, I am impressed by this simple and elegant piece of research carried out in the living rooms of dog owners of New York. But I cannot help brooding that this little experiment could have been carried out by an Indian scientist in the living rooms of New Delhi. I bet the results would not have been any different.