Complexities of the season 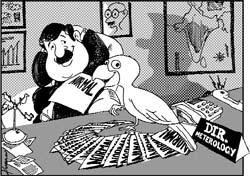 It is the singlemost important event in India. It affects the fate of a farmer as much as it determines political careers. The most important variable in the Indian economy. The single-biggest transfer of mass from the Southern Hemisphere to the Northern Hemisphere. The most regular visitor to India, and one of the oldest -- it started its annual ritual at least 60 billion years ago. And it touches the lives of 60 per cent of the world's population like nothing else. It is called the monsoon, and it's around these days.

It provides most of the rain that falls in India. Naturally, it hasn't been studied as closely anywhere else, although its impact spreads from east Africa to Southeast Asia, Australia to China. Its mysterious origin lies somewhere in the southern Indian Ocean, which by itself is, as oceans go, quite a strange number. The third largest ocean, it holds 20 per cent of the world's water. But it is the only one of the three major oceans -- including the Pacific and the Atlantic -- that doesn't touch both the poles. To its north lies the biggest landmass on the planet: Asia, where the summer temperatures create a low pressure area that invites the moisture-laden winds of the Indian Ocean to come and bang against the highest wall in the world, the Himalaya...you remember the textbooks?

The thing is, nobody knows the textbook that the monsoon follows. From the time that Arab mariners started using the term mausim for the seasonal winds more than 2,000 years ago (and guarded their knowledge from any competition like a profitable secret), we know a lot about the nature of the beast. Yet, the more it is studied, the less we know of it. Or at least the part that we most want to know: How much will it rain, and where?

Tracking the monsoon is the most important regular activity for the Indian Meteorological Department (imd). It is also its biggest headache. For the past 13 years, around the time that Indians were baking in the summer heat and power cuts, the department has always announced that the monsoon would be 'normal'.

At the same time, there has been repeated drought in several states through these 13 years. How does one explain this inconsistency? The answer lies in imd's definition of 'normal'. The department calls a monsoon season normal when the total amount of rainfall in the country between June and September is within 10 per cent (plus or minus) of the average rain over a long period. 'Deficit rainfall' is when it drops below the margin of 10 per cent of the average. 'Excess rainfall' is when it exceeds the average by more than 10 per cent. For example, there could be intense rainfall in the Northeast and low rainfall in central India. The national average rainfall would reflect as normal.

The terminology can be very deceptive if taken out of context. The monsoon is very crucial for Indian agriculture, which is largely rainfed. From the farmers' perspective, a 'normal' monsoon season may or may not deliver what they expect. They want the right amount of rain at the right time (say, at the time of preparing the land for sowing and then at the time of germination), not good averages. How much it will rain (and when) at a particular place is very difficult to predict. But why?
The science of meteorology is well understood but not easily expressed. As such, predicting monsoon accurately is not easy. Meteorologists deal with lots of factors that variate with time. Weather systems are notoriously chaotic. And when it comes to predicting the behaviour of the monsoon, the problem reaches another plane altogether.

First of all, the monsoon is a unique phenomenon. Second, predicting its behaviour over a large subcontinent like India, with its diverse ecological and physical conditions, is an unenviable task. There are cold and hot deserts, hills and mountains, dense population centres as well as dense forests.

Recording the amount of rainfall in the country is by itself exhausting, and the country has some of the world's most elaborate systems for this. India is divided into 36 divisions, and there are more than 1,000 observatories from where rainfall data is transmitted in real time to centres where it is analysed. If you count all the points in the rain gauge network of India, there are over 5,000. Not all of these are handled by imd; some are operated by the railways, state governments and several other government agencies.

The monitoring only tells you how much it has rained -- although that is no less important, and helps determine which areas need drought relief. Predicting the amount of rainfall and its location involves two approaches:
• Statistical model: This is specific to the monsoon and is based on 16 parameters determined by imd, for which data is collected and fed into models. These models calculate the numbers based on mathematical equations. This approach has limitations when there are major departures from the averages. Hence it is used for long-term forecasts (say, for the entire season). The annual estimate of the quantum of seasonal rain is based on this. So, if a change in normal conditions happens in Australia and has a bearing on rainfall over Gujarat (through 'teleconnections'), a statistical model can account for it.

• general circulation model (gcm): This determines weather patterns based on observed data (which are the initial conditions for the dynamic model). The National Centre for Medium Range Weather Forecasting, a body of the department of science and technology that is housed at the imd's Mausam Bhawan in New Delhi, operates a super computer to run a gcm. It is fed with meteorological data from across the world -- 10,000 ground stations, 1,000 upper air stations (balloons) and at least four satellites all around the world.

At 82 centres across the country, it provides farmers 'quantitative' weather forecasts for up to four days -- how much will it rain, where and how long -- through a network of agricultural bodies. This is the only programme of its kind and it provides vital information to farmers for timing agricultural operations, such as irrigation and threshing, according to the probable weather conditions. The gcm takes into account physical conditions, for example sea surface temperatures and thermodynamics.

There are several other gcms in India, and they are used to forecast weather conditions up to three to five days. If these models are used to predict seasonal rainfall, each would give different forecasts.

How does a scientist decide which model to stick by? Years of training and experience. The variability in prediction is higher in the short term and in a small area. If you increase the time frame and the size of the surface for which the forecast is required, the margin of error comes down. The more specific you get, the more slippery is the terrain.

A major hurdle that imd faces regarding monsoon forecasting is, unlike industrialised countries that are situated in temperate latitudes, India lies in tropical latitudes. Tropical weather is notoriously difficult to predict because the forces governing it are very complex. In temperate latitudes, weather activity is advective (that is, mass moves vertically through the atmosphere), and hence relatively easier to predict. In the tropics, it is convective (that is, wind and moisture move horizontally as well). Predicting its behaviour is not that simple. India has no comparison in terms of its latitudinal spread from the Andamans to Srinagar.

Forecasts are made for four time periods. The mechanism for forecasting varies according to the range of time for which the forecast is to be made.

• Four to six hours: This is also called now-casting. It requires no theory, only reliable observation and communication.

• One to three days: This is short-term forecasting. It uses regional data.

• Four to ten days: This is medium range forecasting, made for a sub-division.

• The entire season: This is where 'normal', 'excess' and 'deficit' set in.


Well, the monsoon controls Indian economy. There are always fears that a detailed forecast -- especially one that is extraordinarily good or bad -- can play havoc with the markets. For example, black-marketeers might hoard produce and commodities, waiting for prices to rise. Most major sectors of the economy like to base their sales and distribution activities on the monsoon's behaviour. For example, if the monsoon fails, lower production of foodgrain would mean lower demand for diesel to transport goods. A company involved in sales and distribution of automotive fuels would like to cut down production before the demand plummets. From share markets and betting houses to the collections at temples and sales of vegetables, the monsoon affects everything.