Global resource use must be careful and fair

Environmental stress has resulted mainly from unsustainable consumption levels in poor nations because of bad land-use and degraded village commons and excessive use of non-renewable resources in the developed countries. It is imperative that the global environment be preserved in a fair manner and at the least cost. 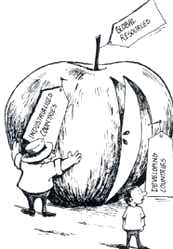 POPULATION growth in developing countries is a horse that is flogged at every international forum. It is a threat to sustainability, because if consumption levels of developed countries are coupled with it, global resource requirements would become exceedingly large. Unhappily, the point that is underplayed is that consumption levels of the rich countries themselves constitute a threat to sustainability. The Earth Summit at Rio was perhaps the first United Nations conference where focus of the North-South debate shifted from population growth in poor countries to consumption patterns of the rich.

The sufferings of the poor cannot be relieved without economic development, but such development needs to be sustainable, which means growth must not cause either environmental degradation or a reduction in availability of resources.

Obviously environmental stress is proportional to these consumption levels. The developed world is responsible from 1950 to 1988 for about 70 per cent of the annual emissions of carbon dioxide and 77 per cent of cumulative carbon dioxide emissions. The per capita carbon emissions of rich countries are seven times that of developing countries. Clearly, it is the consumption pattern of developed countries that is causing global environmental stress.

Besides curbing unsustainable consumption patterns, it is necessary to contain population growth because although it retards growth in the short run of per capita consumption, which reduces greenhouse gases, a larger global population would eventually make it more difficult to reach a steady, sustainable state.

The rural population of developing countries faces serious health hazards associated with the use of biomass fuels derived from plants. A major part of the domestic energy (mainly cooking energy, which accounts for 73 per cent of total domestic energy) is provided by biofuels that emit various kind of pollutants whose concentrations inside the kitchen reaches several times the maximum set by WHO. This results in respiratory problems and other diseases, especially among rural women who are directly exposed to these pollutants.

A variety of pollutants are generated by human activities. Some have local effects while others have a global impact. Local pollutants are sulphur dioxide, oxides of nitrogen, particulates and carbon monoxide, whereas the global ones are carbon dioxide, methane and chlorofluorocarbons. Many local pollutants have severe adverse effects on human health.

Environmental priorities have to be set keeping in mind environmental effects, the extent of the population involved, the costs and which generation would be affected. These trade-offs can be between environment and development, local and global pollutants, different socioeconomic activities that generate greenhouse gases, different regions of the world and present and future generations.


Alternatively, it could be achieved by reducing electricity production by an amount that would be enough for 2,700 to 4,600 households in developing countries. On the other hand, the same reduction in greenhouse gas emissions can be attained by having 800 fewer cars in the USA.

What about trade-offs among regions? How much reduction would have to be done by developed countries when some of the low-income developing countries move closer to the world average? We can assume that global carbon dioxide emissions in 2025 should not be more than the 1986 level of 5.7 billion tonnes of carbon. We can further assume that per capita incomes will increase modestly to US $796 in 2025 from US $249 in 1985 for India and to US $2,000 in 2025 from US $310 in 1985 for China. Using a low emissions scenario, we find that even then the aggregate emissions of these two countries increase by only 21 per cent of the gross greenhouse gas emissions of the world in 1986.

This implies that to stabilise aggregate emissions, the developed world's emissions have to be reduced by 30 per cent, just to provide for modest increases by India and China. It should be stressed that India's per capita emissions in 2025, even if calculated on the basis of India's 1985 population, remains lower than the world average in 1985.

It is important to change the focus of the environment debate from population growth to consumption patterns. Economic growth is desirable not only to mitigate the sufferings of the poor and raise their living standards, but also to reduce environmental degradation caused because of poverty. The present patterns of consumption of the rich are unsustainable with the technology currently available. Hence, the trend needs to be altered to limit environmental degradation and population growth also needs to be controlled so as to stabilise at a higher level of sustainable consumption.

The important question that arises is how global environment can be preserved at the least cost. Cooperation amongst the rich and the poor nations is essential for this. A fair allocation of emission rights that would allow for the development of the poor and adjustment to a sustainable pattern of consumption for the rich, is a major requirement. A fair allocation of rights and marketable permits would enable the poor to set their own environmental priorities and, through prudent behaviour, attract funding for development. Reduction of local pollution is necessary along with economic development for developing countries.

(Based on Consumption Patterns: The Driving Force of Environmental Stress, prepared by Jyoti Parikh and others at the Indira Gandhi Institute of Development Research in Bombay.)