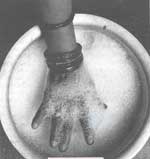 THE unprecedented increase in population, and the even greater increase in the scale of human activity, largely in this century, have been brought about by the growing mastery of science and its applications. This has led to prosperity, improved standards of life, and opportunities have expanded beyond anything that the previous generations could have imagined. But these developments have damaged and deteriorated the ecological systems and caused widespread destruction of the natural resourcebase on which human life and well-being depends.

One such class of products, indispensable from our kives, are detergents. By definition, a detergent is anything that cleans. Although the origin of soap detergents ts shrouded in the mists of antiquity, it is generally accepted that some form of primitive saponification was developed in prehistoric ames in the eastern shores of at Mediterranean. -Soap daergents (using natural Astsi contain a sodium or lum salt of a fatty acid, d or oil. This serves as a c detergent the surfacl alattiiiy derived, like the line or LAS.

A surfactant, or a surface a which surface tension, in turn perowr the s dirt particles to be lifted or floated off the article, then to ned by water. Another distinction between soap and bttk detergents is that the latter contains a lower percent unfactants, but higher levels of phosphates, which helps w the water.

About 15-35 per cent of a detergent comprises of a surfactant, such as LAS, and the remaining is of substances known as fillers. These include phosphates, optical brighteners, bleaches and perfumes. LAS does not show any buildup in waterbodies (where they eventually flow out after washing) over some years, as it is biodegradable. Thus, LAS residues do not constitute a significant toxicological problem.

The problem caused by LAS, however, is one of foaming. Foam is visible and is aesthetically unacceptable in sewage treatment plants, and in rivers and streams receiving their outflows. As these compounds are able to reduce foam even in very low concentrations, aeration of water (in sewage treatment plants, to increase the rate of organic matter degradation) is nQt possible, since it tends to increase the amount of foam once again. Hence, the rate of recreation of river water is reduced, along with the efficiency of sewage purification.

aquatic flora and fauna are to foaming. If the surface-active i detergent is not biodegradable, I as industrial effluents would be ose a hazard to the environment.

Concern for the environment was of the list of prior- right at the bottom corporate ities. Due to increasing environmental awareness, there is an increasing emphasis on the use of ecofriendly products for various domestic purposes.

The criteria for detergents being considered environment friendly are described in the Gazette 6fIndia, (April 1992). The product should not contain any phosphate, because sudden increases in phosphate levels causes eutrophication of water bodies. It can contain environment-friendly substitutes, but should be used in sufficient quantities to ensure a similar performance of the product as compared to the phosphates. The active ingredients used must have a biodegradability of 97 per cent. The detergent should also not cause skin irritation.

According to the Industrial Toxicology Research Centre (ITRC), Lucknow, detergent particles destroy the natural, thin layer of protective oil on the skin. Also, nearly 80 per cent of skin problems among infants are caused by clothes washed with detergents.

According to The phosphate Report, published recently by the Landbank Consultancy of London, phosphate-free detergents are no better for the environment either. There are alternatives, such as zeolites, which are essentially minerals or synthetic compounds characterized by an aluminosilicate tetrahedral framework (which could also be used as water softeners). But these can do just as much harm to the environment.

Phosphates, however, have the enormous advantage over zeolites, and over all detergent builders, in that they can be easily and cheaply recovered from wastewater for recycling. The Netherlands is already operating 2 sewage treatment plants which have phosphate recovery units.

However, detergents generally contain a fair percentage of sodium tripolyphosphate (STPP). This STPP may be partly replaced by enzymes. The use of enzymes in detergent formulations is now common in the developed countries, with over half of all detergents presently available containing these. In fact, in the West the detergent industry is the single largest market for enzymes, grabbing 25-30 per cent of the total sales. Some Indian brand-namcs also use enzymes.

Dirt comes in many forms and includes proteins, starches and lipids. It is possible to remove most types of dirt by using synthetic detergents in water at high temperatures (50-60oc) and through vigorous mixing. But the cost of heating the water is high, and prolonged mixing or beating shortens clothlife.

The problem of staining of clothes is more serious for those working in kitchens, and in industries such as fish processing, poultry and meat etc. However, enzyme-rich detergents arc able to remove not only the obvious stains, such as blood, but also other less obvious materials, including proteins from body secretions, milk, egg, fish and meat.

Enzymes are of different kinds, depending on the als (substrate) they degrade. For instance, the In degrade proteins, amylases degrade starch, lipases hpids, and the celluloses degrade cellulose. A feature c to all enzymes is that they convert their substrates in and readily soluble fragments which can be casil r from the fabrics. These enzymes are produced by m For instance, the alkaline protease is obtained from a um, Bacillus licheniformis.


Soil is absorbed with sweat and sebum (secretions of ceious glands, which contain fatty acids, cholesterol an cells) in the network of cotton fibres of the fabrics whi made of cellulose. Alkaline celluloses partly modif 'v the lose and subsequently, the solid is removed by deter Similarly, alkaline lipases act on oil spots as well as an C adsorbed on them.

Alkaline proteases remove stains like blood and pre ceous materials which come through handling food itei the absence of proteases, proteinacei coagulates on the fabric as a result washing conditions. Higher temper; and PH, and the action of the surf; and sequestering agents dissolve in the dirt components, and the blea agent decomposes the undissolved the fabrics.

The process, however, causes the tem material to precipitate onto the This precipitate also retains other dirt cc ponents and is subsequently diffic4 remove. Failure to remove the prota ceous dirt results in the fabric appe4 grey and unclean after several washings.

An enzyme should have certain pr-4 ties to be able to function under varN washing conditions. The PH of laul detergents is generally alkaline, and te perature requirements can be as hi 95oC.

Detergents also contain oxich bleaching and chelating agents whid hinder the activity of certain enzymes. Some surfactants denature the enzymes. Hence, an ideal detergent enzyme be stable in alkaline conditions, have stability over a wide perature range, be compatible with the oxidizing, blea, and chelating agents and perfumes, and should no( re, metal ions for their own activity.

We have developed microbial processes for production of bacterial alkaline protease and ft alkaline lipase, in the Department of Microbiology a University of Delhi's South Campus. With the incre use of washing machines and the availability of enzym a safe, encapsulated form, there exists a tremen market potential for enzyme detergents. The us enzymes will contribute to environmental safet, decreasing the use of more toxic detergents, conserVJ of energy due to washing at relatively low temperat, and also help in keeping clothes in better health I longer time.