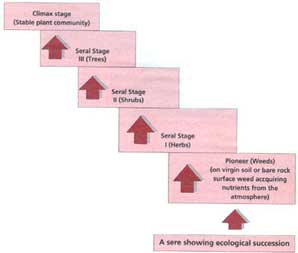 MAN, the most arrogant of animals, has forgotten nature's best lessons. Growing and living in harmony is one of them. Like the humans, they too have their struggles and competitions for survival and growth. Yet, they go through the entire gamut of such exercises without squabbling. This is what the issue of succession is all about.

Succession is a series of changes occurring in the plant and animal life of a particular area, beginning with the colonisation of the soil or rock surface by algae or lichens; for they are the pioneer community -- the first to appear on virgin soil. The end product is a stable, climax community, in perfect equilibrium with the environment.

Succession is a reasonably directional and orderly process, and hence the nature of the climax community is predictable. The dynamism involved in the gradual replacement of 1 plant community by another, which is totally different in nature, is remarkable. The changes occur because the existing plant community, by its presence and interaction with it's neighbours over the years, modifies the physical environment and, as the original plant community can not adapt itself any more, it paves the way for a better suited species. This becomes the climax community.

Succession is of 2 types: primary and secondary. Primary, or autogenic succession starts on sites like soil or bare rock surfaces which have never been occupied by any vegetation. The virgin site may be located on water also. The incidence of a seed or spore landing on such a spot is purely a matter of chance. Eventually, it grows up, totally changing the environment by it's presence and interaction. Succession starting on dry, rocky material is called "xerach succession"; and if it starts in a waterbody it is termed as "hydrach succession". "Mesarch succession" is initiated when successions starts in moist, well aerated soils.

Secondary or allogenic succession starts on sites which have been rendered barren due to the destruction of a part or whole of the original (existing) vegetation due to any calamity, like flood, fire, volcanic eruption, epidemic or tidal wave. Sometimes human interference, like clearing forested land for agriculture, grazing etc, may change the face of the land. Secondary succession can be completed in a much shorter span of time on a burned heath or woodland. Primary succession, on the other hand, may take a number of years to complete because the site is completely barren.
Some ecologists say that primary succession takes place in stages. These stages have recently come to be termed as "seres" or "chronosequences". This does not necessarily mean that the stages appear 1 after the other, or that there are no overlaps. Besides, there is no specified time-span for each stage to begin or end.

When succession starts on a rock surface, the body of the pioneer acts as a collecting structure, and absorbs nutrients from the atmosphere. Also, it acts as sun-shields. When the plants die, they decay and their remains are converted into humus, which increases soil fertility.

When succession starts in a pool of water, the pioneers live, grow and complete their life cycles, and then precipitate to the muddy bottom, making the water shallower. The altered conditions are again, not suitable to the pioneer group, and hence replaced by a better suited group of plants.

Due to these changes new species either completely replace the pioneer species or grow along with it. This is called the consolidation stage. The 3rd stage is called sub-climax. The climax stage is of a permanent nature and arises when the vegetation is in complete harmony with the environment or prevailing circumstances.

Initiation and continuation of the species are the 2 distinct sets of causes of primary succession. Initiation occurs because of erosion and the deposition of eroded material on the surface. Climatic and physiographic changes are also responsible for this. Sometimes, deposits in the estuarine and coastal belts and subsurface movements -- like elevation and subsidence due to seismic disturbances -- may induce initiation of primary succession.

Primary succession may continue because of migration or the movement of plant species from 1 place to another. Transfer can take place in the form of spores, seeds or fruits, and the media for dispersal may be wind, water, birds or humans. After migration, the 2nd stage starts. This is called ecesis, which involves the establishment of the plant in the new region, where germination of the seed, growth and reproduction takes place.

The next phase, prior to attaining equilibrium, is that of rapid growth and multiplication, expanding the area covered by the particular species. Here, the individual plants compete for space, light and food. This in turn determines the fittest of the plant species, which will finally dominate the scene in the years to come.