How excess nutrients can kill a lake 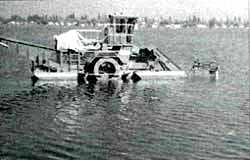 THE Udaipur lakes are dying of asphyxiation. Fed by huge amounts of nutrients and organic matter, the lakes are covered with a carapace of water hyacinth and blue-green algae, the first indication of "accelerated eutrophication".

Eutrophication is the slow and steady natural ageing process of any confined waterbody, and is measured in tens of thousands of years. The time range of eutrophication depends on the size of the waterbody, the area of the basin draining into it, and the quantities of nutrients in the drainage basin. But human activity that pollutes water stimulates eutrophication and can cause a waterbody to be choked in a few years.

The ageing process of a lake is a complicated matter. A lake can be seen as made up of layers differentiated on the basis of the temperature, the carbon dioxide and oxygen content, and the presence of organisms. Stratification is best observed in the summer, when a lake is at its most active stage. It can be divided into 3 layers -- the nutrient-rich top layer called the epilimnion, the middle layer, or the thermocline, and the bottom sediment layer, called the hypolimnion.
Nutrients are supplied to the warm, aerobic epilimnion by streams that drain into the lake, helping organisms grow and multiply. When these organisms die, their remains settle on the hypolimnion, which is cold and has little or no oxygen content. If the remains do not decompose entirely, they settle down as sediments, which eventually builds up to such an extent that stratification is not possible. A consequent rise in the temperature of the lake during summers results in the rapid growth of algae and shoreline plants. Finally, the lake is converted into a marsh choked with plants. Then it disappears altogether.

"Accelerated eutrophication" occurs if the nutrients entering the system are far in excess of that normally brought in by the drainage basin. The result is "algal blooms": the excess nutrients promote the rapid growth of algae till they exhaust the supply of one or more nutrients essential for their survival. This causes the algae to die off and their decomposition rapidly consumes the oxygen dissolved in water, asphyxiating the fish. When the fish die, so does the lake's ecosystem.

Eutrophication is directly proportional to the pollution of a waterbody: sewage from urban centres, and runoff from agricultural fields carry large amounts of nutrients that feed the algae and phytoplanktons. Of the 15-20 nutrients necessary for the growth of aquatic plants, only 3 are important for eutrophication -- carbon, nitrogen and phosphorus.

Carbon enters in the form of carbon dioxide from the atmosphere, as carbonates from the soils and rocks and in the organic forms from human or animal wastes. Sewage also contains nitrogen and phosphorous, but in quantities much lower than that of carbon.

Agricultural runoff largely contributes to the presence of nitrogen in the waters. Fertilisers contain nitrogen in the form of nitrates and ammonia compounds which are soluble in nature and, therefore, readily removed if not utilised by the plants immediately.

Sewage contains large quantities of soaps and mainly phosphate-based detergents. Agricultural runoff accounts for far less quantities of phosphorous by comparison. the reasons being that the phosphorous fertilisers are not as widely used as nitrogen fertilisers and they are not readily available in the soluble forms. Thus the maximum quantity of phosphorous is supplied by the detergents which account for about 30-40 per cent of the total phosphorous entering the aquatic environment. This increases to about 70-80 per cent where the human population is concentrated. Therefore, a concerted effort has to be made by us to reduce the amount of phosphorous from entering the lakes. This could be achieved if an alternative to the phosphorous-based detergents is found.

Efforts to contain accelerated eutrophication are based on Leibig's Law of the Minimum, which states that "under the steady-state conditions the essential materials available in amounts most closely approaching the critical minimum needed will be the limiting factor in growth and reproduction of an individual species of plants and animals".

But the Law of the Minimum cannot be applied so easily to living organisms, whose requirements are very complicated. The organisms require the elements in forms that they can metabolise without much effort and these forms differ from organism to organism. Further, this law holds true only in steady-state conditions. Together, these 2 factors tend to limit research in eutrophication control.

Experiments to determine the actual culprit of accelerated eutrophication are hampered by the nature of the organisms under study. For one, under certain circumstances, the algae absorb more of the abundant nutrient than required, storing it for use later.

Third, some of the nutrients may be supplied in constant concentrations of the solid or the gaseous phase. Take phosphate salts: most of them are insoluble and are found in large amounts in the sediment. The phosphorus is replenished in the liquid phase by its solubilisation from the sediments and it is constantly lost as the organisms incorporate it from the solubility state. Therefore, measuring the phosphorous concentration in the liquid phase does not help us in determining the total amount of available phosphorous. Similarly, the dissolved forms of carbon are replenished by atmospheric carbon dioxide.

Therefore, in the face of all these complications, the problem can be solved by finding an element whose availability can be reduced to such an extent that it will become the limiting factor. The other solution could be to define that human activity which is the cause of accelerated eutrophication and also one which can be easily controlled to reduce the concentration of one element to a point where the steady state condition can be achieved, the Law of the Minimum can be applied and the premature aging of the water-body can be prevented.


A lot of debate as to which element could be made the limiting factor has suggested phosphorous as the best possible answer, but even that is wrought with controversy. The points in favour of phosphorous removal are:

1) The technology for phosphorous removal is much more advanced than that of either carbon or nitrogen.
2) Phosphorous sources are well known and limited, therefore, their control is easier.
3) Carbon and nitrogen are readily available to the aquatic plants from the atmosphere if not from the water. There is no such atmospheric source of phosphorous.

On the other hand the arguments against the removal of phosphates from the detergents are:

1) Phosphorous is not the limiting factor in nutrient rich/eutrophic lakes, but it could be in nutrient poor or oligotrophic lakes.
2) Carbon makes up about 50 per cent of the algal weight which gets assimilated through photosynthesis of carbon dioxide. Aquatic plants draw this carbon dioxide from the water so the amount of dissolved carbon dioxide can be made the limiting factor rather than phosphorous.
3) Once the phosphorous enters the body of water it is recycled by the plants and algae. This regeneration of phosphorous is faster than that of nitrogen.
4) Phosphorous replenishment from the bottom sediments undermines the efforts of phosphorous removal.
5) Phosphate substitutes in detergents could lead to other as yet unidentified problems.

If we summarise the above argument, it is clear that those against phosphate removal are not convinced that phosphorous is a limiting factor. Furthermore, they feel that eliminating it from the detergents will not solve the problem as large amounts of it are present in the bottom mud. Thus, they feel we should not take the risk of introducing a new problem in the form of phosphorous substitutes.

On the other hand, those in favour of phosphorous removal feel that it is one of the most easily controlled plant nutrients and, therefore, should be eliminated from the detergents and made the limiting factor even if it isn't so at present. They feel that if the phosphate salts in the bottom sediments are to be used up eventually, why not start using them up now.

Both sides agree that the best long-range plan is to treat all waste waters and remove the excess plant nutrients before research yields other ways to effectively control the premature aging of natural, confined water bodies.