All our energy needs could be met if even a fraction of the solar energy received on the earth could be converted into electricity, and the means to exploit this potential is provided by semiconductors. 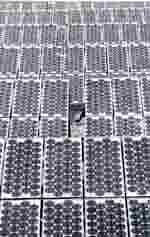 LIFE WOULD not be possible without the light and heat received from the sun. For all the energy that we consume on earth -- whether in the form of biomass or oil -- the ultimate source is the radiation from this fairly ordinary star in the Milky Way galaxy.

The amount of energy received on the earth from the sun is a mindboggling 1018 kWh annually, while humankind's total yearly energy consumption is only about 0.01 per cent of the solar energy received. If we could harness even a minute fraction of the colossal amount of solar energy into more useful forms of energy, all our energy needs could be met. What is more, solar energy would be safer, more environmentally friendly and less polluting than energy from fossil fuels, nuclear energy or even hydroelectric power.


One of the areas of solar energy in which a lot of research effort has gone in is solar cells -- devices that convert solar radiation into electricity. A solar cell may function as a light detector, as in the exposure meter of a camera, or form part of an electric power generating system.

The basic principle behind the working of a solar cell is the photovoltaic effect -- conversion of light that falls on a material into an electric voltage -- discovered by A C Becquerel in 1839. Though the effect was originally observed in a solution, photovoltaic cells mostly make use of solids called semiconductors.

The simplest device that is used for a solar cell is a pn junction. This, as the name suggests, is simply an electrical junction formed from a p and an n type semiconductor. The two sides of the junction have carriers of opposite charge and, because unlike charges attract each other, diffusion of these carriers occurs across the junction. Near the junction, the holes from the p-type diffuse into the n region, leaving behind negatively charged ions in the p region. Similarly, electrons from the n region diffuse into the p region leaving behind positive ions. Thus a region is created at the junction which has a negative charge on one side (p-type) and a positive charge on the other side (n-type). This region is called a depletion layer.

The conversion of solar energy into electricity in a solar cell is a three-step process. First, the radiation has to be absorbed by the semiconductor material. Then, the absorbed energy generates free electron-hole pairs in the semiconductor. Separation of these charges generates a voltage across the cell that can be used to produce an electric current.


The amount of light absorbed by a solar cell depends upon the intensity and frequency of light falling on it, the characteristics of the material of the cell, the reflection properties of the cell and the thickness of the layer of the semiconductor material. An important quantity here is bandgap -- the minimum amount of energy that the material can absorb and, subsequently, convert into electricity. Silicon has one of the lowest bandgaps among the semiconductors, which explains its widespread use in solar cells. To increase absorption of light, various techniques like Fresnel lenses for concentration of solar radiation are used.

Once the light is absorbed by the material, free electron-hole pairs are formed. In a pn junction, these pairs get separated because of the depletion layer, with the holes going towards the negatively charged ions in the p region and the electrons moving in the opposite direction. This separation of charges is what causes a voltage to develop and can be used to derive a current. In some applications like calculators or watches, the current derived from such a cell is used directly, while in most applications where conventional electrical power is required, the output is converted to an alternating current through a power conditioning system.

Since the individual solar cells have small areas (because of the difficulty in producing pure semiconductor material), the basic handicap in their usage has been that only a small amount of power can be generated. Typically, a silicon cell can deliver about 0.6 watts at 0.5 volts in full sunlight. To generate more power, a large number of cells in huge arrays are used.

Another area of research has been to enhance the efficiency of the material used. Silicon has a typical efficiency (the percentage of falling light converted to electricity) of 15 per cent, while newer materials like single crystal gallium arsenide gives a higher efficiency. The use of thin films of semiconductor materials that are better absorbers of light than silicon also increase the efficiency of a solar cell. An increase in efficiency can also be brought about by using a multilayered device. This is basically a stack of different materials, with each layer sensitive to a different part of the spectrum (that is, having a different bandgap), thereby making optimal use of the falling light. Typical materials used are gallium aluminium arsenide, gallium arsenide and silicon. With these multilayered devices, efficiencies of upto 40 per cent are possible.

Even with tremendous technological improvements in the last two decades, solar cells are still not feasible for large-scale commercial use. Significant material and efficiency enhancements leading to a much lower cost are required before their widespread use becomes a possibility. Nevertheless, there are several areas where solar arrays have been used to supply power: in remote areas where the cost of setting up transmission lines is prohibitive, in navigational aids and remote radio repeaters, for example. Of course, to all this must be added the use of solar arrays in satellites where their use is almost universal. Maybe as our nonrenewable sources of energy are depleted and the environmental costs of conventional energy sources are taken into the cost-benefit analysis, this clean, renewable and inexhaustible source of energy will become more and more attractive for supplying electric power.