What is Sustainable Development?

Sustainable development, the buzzword in environmental circles, is largely misunderstood. It can only come about in a society which can learn from its mistakes in handling natural resources. This new column gives our readers the background of contemporary issues. 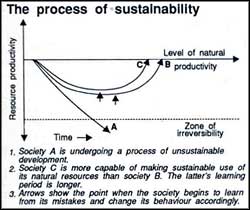 "Sustainable development is development that meets the needs of the present without compromising the ability of future generations to meet their own needs". This is a definition offered by the famous World Commission on Environment and Development in its report Our Common Future. Economists have also provided a definition of sustainable development as being an economic process in which the quantity and quality of our stocks of natural resources (like forests) and the integrity of biogeochemical cycles (like climate) are sustained and passed on to the future generations unimpaired. In other words, there is no depreciation in the world's "natural capital", to borrow a concept from financial accounting.

But what is the operational substance behind such definitions? Who is going to ensure the rights of future generations when, given the highly divided world we live in, a large proportion of even the present generation cannot meet all its needs. Given such a social and political context, the above definitions also fail to say whose future generations' needs are being sought to be protected and preserved. Are we talking only of the future generations of the rich or also of the poor? These definitions are all, at best, rhetorical and woolly.

More than these pious definitions, it is important to understand the political content of sustainable development. Sustainability can never be absolute. A society which learns faster from its mistakes and rectifies its behaviour will invariably be more sustainable than another society which takes a longer time. And a society which fails to incorporate the lessons of its mistakes into its behaviour patterns even after the point of irreversibility has been reached, is obviously a society which is pursuing a totally unsustainable process of development. Learning from one's mistakes is crucial to the process of sustainable development because no society -- today, tomorrow or ever in the future -- can claim to be so knowledgeable that it will always manage and use its natural resources in a perfectly ecologically sound manner. That will always be a near impossibility. Changing social, political, cultural, technological and ecological conditions will exert new pressures on the natural resource base and the possibility of its misuse or overuse will always remain. It can, therefore, be argued that sustainable development will be the outcome of a political order in which a society is so structured that it will learn fast from its mistakes in the use of its natural resources and rapidly rectify its human-nature relationships in accordance with the knowledge it has gained.

The important question, therefore, is: which political order will lead to conditions which encourage a society to learn fast from its mistakes in the use of its natural resources? It is obvious that such a society will be one in which decision- making is largely the prerogative of those who will also suffer the consequences of those decisions. If decisions are taken by a distant national bureaucracy or a transnational corporation to use a particular resource, and a local community living next to that resource is suffering in the process, it is unlikely that the decision-makers will change their decisions fast. But if the resource is being overused or misused by a local community which is dependent on it for its survival, and cannot easily relocate itself to another environment (in other words, it is a settled community rather than a frontier community), the declining productivity of the resource would sooner or later force the local community to change its ways.

Sustainability thus demands the creation of a political order in which, firstly, control of natural resources rests to the maximum extent possible with local communities who are dependent on those resources; and, secondly, decision-making within the community is as participatory, open and democratic as possible. The more this happens, the more we will move towards sustainable development.

The bedrock of sustainable development is composed of freedom and democracy -- a system of governance which gives freedom to a community or a nation, within an universally accepted social framework that prescribes penalties for harming another community or nation, to control the use and management of its natural resources so that it can determine its own way of economic and social development. Each society will experiment and learn from its own mistakes. Sustainable development cannot be thrust upon by an external agent -- whether it is the World Bank, the United Nations or the forestry department of a government -- simply because it believes, at any point in time, that it has learnt all the lessons there are to learn. That will surely be a process towards unsustainable development.