Home |
Classroom
| Why one cell becomes a nose and another, an eye

Why one cell becomes a nose and another, an eye

All living things begin life as a single cell, and one of the most intriguing puzzles for biologists is to understand how a particular cell knows into which part of the body it must grow 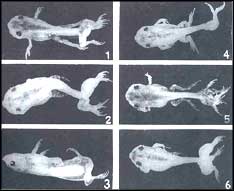 BRITISH scientist William Bateson, who is responsible for coining the word "genetics", had an unusual scientific career.

He started out as a student of animal morphology -- a branch of zoology that emphasises such obvious aspects of an organism as its form and the way it looks to us. Later, he became a champion of Mendelism, which forms the basis of genetics; in fact, he was one of those who re-discovered Gregor Mendel, who pioneered experiments on inherited characteristics of various organisms. Towards the end of his distinguished career in biology, Bateson reverted to his early role as a swimmer against the prevailing tide. Though he had become an ardent evolutionist, he was increasingly seen to combine his belief in evolution with a strong disbelief in the generally accepted theory of evolution: natural selection, known popularly as survival of the fittest, a theory owed to Charles Darwin and Alfred Russell Wallace.

Bateson had no time for what was considered then a newfangled, but widely accepted notion that genes -- the carriers of heredity -- were material entities located in chromosomes.

Bateson's main reason for scepticism to the natural selection theory was his belief that variation, and not selection, was the driving force of evolution. Evolution is normally understood to mean that an accumulation of a large number of variations eventually leads to a major evolutionary change, such as a fish-like creature becoming a bird.
Convinced that this was impossible, Bateson contended the novelty of evolution had more to do with the chance appearance of a striking variation -- a novelty arising as the end result of a series of small, adaptive changes. The characteristic form of variation, Bateson noted, was the replacement of one body part by another, when a part of a body is cut and allowed to regenerate. For example, if the eye-stalk of a segmented decapod such as lobster, crab or prawn was removed, the animal usually regenerated a new eye-stalk in its place, though at times the replacement might be merely an antenna. The word Bateson coined to describe this phenomenon is homoeosis, which means substitution of one body part by another that in retrospect is seen to be homologous (similar in design) to the original part. This transformation is called a homoeotic transformation.Research in homoeosis is becoming increasingly popular with modern botanists and zoologists. This is because homoeotic transformations can actually be initiated with genetic alterations. For example, a mutation (change from the normal state) in a single gene in an ornamental plant can cause its petals to be replaced by sepals. Similarly, a mutation in a fruit fly gene can cause an antenna to develop into a leg. These genes are called homoeotic genes and can be compared to an electric switch. If the switch is off, the gene does not function as it should and a homoeotic transformation takes place.

Work by Priyambada Mohanty-Hejmadi and her Utkal University colleagues demonstrates even vertebrates exhibit homoeotic transformation. The Utkal University experiments were based on path-breaking work by a team in Jaipur, headed by I A Niazi. While studying regeneration in amputated limbs of tadpole larvae, Niazi and his colleagues discovered that if they added retinoids -- a family of chemical compounds including vitamin A and its derivatives -- to the liquid bathing the regenerating stump, the regenerate often contained extra digits and, sometimes, even mirror-imaged duplications.

Over the past 10 years, the Jaipur experiments have fuelled interest in the role that retinoids play in determining the three-dimensional part of a limb. The Mohanty-Hejmadi team looked at the effect of vitamin A on tail regeneration in tadpoles of the marbled balloon frog. The results were startling. When tadpoles whose tails were amputated at an early stage were allowed to regenerate in the presence of vitamin A, a significant percentage was transformed into hind limbs. The transformation was not into a single limb but into a pair and, on occasion, the pair duplicated once more ending finally in an odd number of limbs.

Almost as surprising as this homoeotic transformation was the unexpected observation that in some cases, one of the normally developing hind limbs that had not been disturbed, duplicated on its own. Mohanty-Hejmadi and her colleagues contend there are similarities between the groups of cells that form hind limbs and tails. This similarity -- more precisely, equivalence -- must exist upto a certain stage in development because after it, the various cell groups are evidently no longer equivalent as in the normal course, they develop into different structures.

The homoeotic transformation of frog tail to frog leg is reminiscent of transdetermination -- another curious phenomenon. Swiss geneticist E Hadorn found that if he took cells from a fly larva that normally would give rise to a particular part of the adult, and these cells were grown while maintaining their larval state, the cells would retain a memory of into what they had to differentiate. For example, those cells in a larva that later form the adult eye are to all outward appearance very similar to the cells that are destined to form a leg. These undifferentiated eye cells can be made to divide an unusually large number of times and they can then be tested for their differentiation capacity. Hadorn found they retained their property of giving rise only to eye tissue. Similarly, wing cells when tested retained the property of developing into wings and so on.

This was taken to mean that even though all the cells looked similar in the larva, presumptive eye cells were irrevocably committed to form eyes and wing cells, to form wings.


In animals that exhibit regeneration, cells close to the amputated surface rapidly lose their specialised character and assume an embryonic appearance. After this, they proceed to divide rapidly and re-enact their developmental history. In this light, the Mohanty-Hejmadi team has demonstrated the transdetermination of frog tail to frog leg.

The essence of the present finding is that applying vitamin A can bring presumptive tail cells back to limb regeneration. Though this looks like the result of a homoeotic mutation, it evidently is not, as there is no reason to believe a permanent genetic change has occurred.

As far as is known, vitamin A does not cause mutations. Mimicking the effect of a mutation by externally induced developmental agencies was in vogue about 30 years ago. This sort of mimicry is possible because the external stimulus disturbs some step between the message contained in the gene and the final execution of the message.

The nature and consequences of a genetic switch regulating fundamental features of the body plan, can now be studied without tampering with the genes or at least be spoken of in concrete objects. Bateson would have been pleased.

V Nanjundaiah is professor of development biology at the Indian Institute of Science, Bangalore.