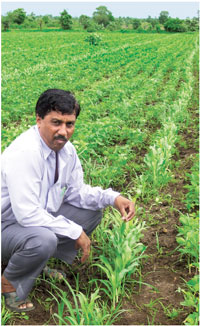 At a time when the traditional cropping pattern of suicide-ravaged Vidarbha has all but disappeared under the lure of quick cash from soybean, a tiny village of 48 farming households in Maharashtra’s Wardha district decided to revive jowar millets, the local food and fodder staple. Despite debts and in crying need for cash, the farmers reserved 20 hectares (ha) for jowar, which is 10 per cent of the village’s agricultural land. Dorli village made headlines five years ago when it put itself up for sale— land, homesteads, animals and all. Reeling under heavy agricultural losses for the past three years, the villagers had decided that this was the only option they had, apart from suicide. The losses have continued unabated and villagers were pushed to take a hard look at its agricultural practices. There is a growing realization that things need not be as bad as they are. The decision to plant jowar comes as a timid first step to make them better. “It was last year’s drought which finally woke us up to the fact that we can’t get anywhere with only high-input cash crops,” said Chandrakant Dorlikar, a resident. The drought, apart from bringing down the yields to an all-time low, also dried up every stalk of fodder available, driving the village to buy fodder at exorbitant rates of Rs 7-8 a kg to keep its 240-odd heads of cattle alive. The cost of food had also skyrocketed. “It was then that we realized the value of jowar—it yields abundant fodder due to the length of its stalk, and also provides food grain at one third its market cost,” said Dorlikar, “As a start, we decided to reserve just one acre of land per household for jowar.” Deccan Development Society, a non-profit propagating millet cultivation, is paying Dorli’s farmers Rs 2,000 subsidy per acre (0.4 ha) on organic jowar cultivation every year for a period of three years. The village has 200 ha of agricultural land, with holdings of 1-4 ha per family. Vijay Jawandhia, prominent leader of the farmers’ organization Shetkari Sanghatana, said reviving jowar cultivation is a must to revitalize the crisis-ridden agriculture sector in the region. “Jowar offers not just food security but fodder security for cattle, which in turn provides fertilizer security, reducing dependence on chemical inputs. It is a rain-fed crop requiring no irrigation, and is also more nutritious than wheat or rice.” Jawandhia rued that for the last four years, his pleas to the state and central governments to provide Rs 1,000-peracre subsidy on jowar cultivation has fallen on deaf ears. In Dorli, villagers hope if the season goes well, they will be able to harvest around 15 to 20 quintals of jowar per acre, apart from enough fodder to sustain for a year an average of five animals each household owns. “Ten years ago, that was the kind of jowar yield we used to have,” said Mohan Halule. Looking back, villagers said the disappearance of jowar brought many problems. “Cattle numbers in the village dropped to less than half in the past 10 years,” said Sujata Halule, a resident. Groundwater levels also dropped as jowar was replaced by irrigated crops, she added. “If this year’s yield is good, we will consider extending the acreage under jowar,” said farmer Dharampal Jarunde. “We will add to our livestock too,” he added. Women in the village are a little sceptical though as taste buds of the generation raised on softer wheat chapattis will have to cultivate a taste for the thick jowar chapattis. Ã”Ã»Ã¡