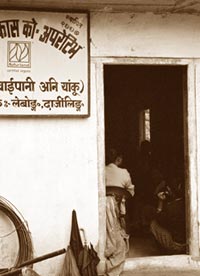 Three small villages near Lebong town in Darjeeling district of West Bengal no longer need the government for water, or to earn a livelihood. Yangkhoo, Dabaipani, and Harsing together run their own 24-hour drinking water supply system and export certified organic tea. All plans, like the latest one to export organic ginger, cardamom and oranges are decided by the 483 families of the villages at the Sanyukt Vikas Co-operative (svc). "The 14 hamlets of the three villages together constructed a water supply system without any aid from the state government. We did shramdan (voluntary labour) and got cement and pipes from the Darjeeling Ladenla Road Prerna (commonly called rcdc). The system was ready within two years," says rcdc member Binod Chettri.
svc was formed in 1996, when rcdc, a Darjeeling-based non-governmental organisation, did a survey of villages in Lebong. "There was no governance then and most villages were unapproachable. We started with social forestry, which was a huge success. Villagers set up svc and since then a lot of work has happened," says Rohin D'Souza, programme manager of rcdc.

svc starts with farmer families, has hamlet committees as its middle tier and is led by a board. The members of the 14 hamlet committees and the board are elected. The board has sub-committees, such as the one for tea. All the member families follow organic farming and have to register themselves with the svc after paying Rs 21 as fee. svc has a contract with the Kolkata-based Tea Promoters of India (tpi), which buys organic green tea leaves from the farmers. The green tea leaves are collected through a network of elected hamlet collectors, who record the collections. These collectors take the tea to a central point where the produced tea is reweighed and crosschecked. A transport in-charge and a few svc members transport the tea to tpi's Selimbong Tea Garden, where the leaves are processed for manufacturing finished tea. Switzerland-based Institute Fur Marktokologie has certified svc organic tea. Farmers have to follow Institute Fur Marktokologie's guidelines or risk losing their svc membership if they don't. "Farmers need at least three years to convert to organic farming. Till then, tpi helps farmers with training and capacity building. tpi also bears the complete cost of organic certification and pays for the annual visit of audit teams. This ensures that farmers do not have extra financial burden," says Sailesh Sharma of tpi.

Organic tea having become profitable, the villages decided to move to another project. "Drinking water was scarce. We had to walk kilometres to fetch water in heavy bamboo drums. Then we developed our own supply system within 2001-2002. We decided to tap the perennial streams and constructed 34 huge catchments near the hilltop to collect water. A catchment tank is connected with reserve tanks, sub-tanks and filtration tanks spread across the three villages. Villagers have connected pipelines from these tanks to their houses," says Chettri. The cooperative maintains the tanks and households their pipelines.

While svc was on, women in the villages formed their own self-help groups (shgs) in 1999. rcdc helped women form groups and monthly save an amount of Rs 50. On the 8th of every month a nodal meeting of all shgs is held. Now there are 10 shgs with a total saving of Rs 1,45,537 deposited with the Indian Bank at Darjeeling, which gives them loans for various activities. "Women never stepped outside their homes, but now we collect vegetables and sell them in Darjeeling. Not only that, we worked with the men to build the water supply system," says Ganga Rai of Harsing.

Women are also trying to get rid of middlemen who buy vegetables from the villages and sell them in Siliguri, West Bengal. Sanju Rai tried to sell ginger at Siliguri once. "We took the ginger in a hired truck to Siliguri, but the middlemen are so strong that traders refused to give us good amount of money. We lost about Rs 4,000. But we plan to give it a try again and succeed this time."