A date with the Valley

A date with the Valley 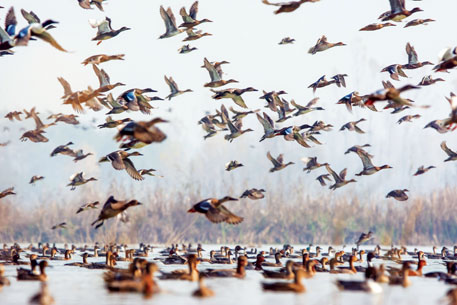 The unprecedented flood in Jammu and Kashmir in September last year left a trail of destruction. While the state is still dealing with its aftermath, wildlife authorities have something to cheer about: winged vistors kept their date with the Valley despite the damage caused to the wetlands by the flood.

Wetlands in the state have been rapidly shrinking over the years due to urban encroachment. The flood only worsened their condition. The water brought with it mud, piles of rubble, dirt, rocks, debris from damaged houses and highways, septic waste from houses and sewage. These blocked the inflow and outflow channels of the wetlands. Oil from petrol pumps drifted along with the floodwater and accumulated in the Hokersar wetland, 14 km north of Srinagar. The water contamination, ecologists feared, would take a toll on the number of migratory birds this season. But they were pleasantly surprised as birds flocked to their winter homes, including Hokersar wetland, at the usual time.

No stopping the winged visitors

Migratory birds translocate to Kashmir every year to avert the extreme winter in Russia and Central Asia. Birds also come from the Philippines, Turkey and China. 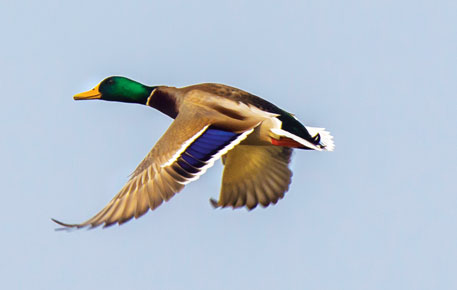 “The number of migratory birds is slowly going up, which is the usual trend. It increased from 0.3 million in November 2014 to 0.6 million in December. With more birds flocking, the number is expected to go up further. This is satisfactory considering the damage caused by the flood,” says Imtiyaz Ahmad Lone, Wildlife Warden (Wetlands), Srinagar. Comparative studies indicate an upward trend in the number of migratory birds in the state in recent years. Last year, 1.2 million birds were recorded.

The wildlife authorities claim that they took prompt action to ensure that the natural habitat of the birds was not disturbed. Although they did not have a mechanism in place to take out the oil, they worked overtime to clean the waters. “We cleared the inflow and outflow channels, which were blocked by solid waste and silt. Once these channels were free, the oil slick was drained and fresh water could easily come in,” Lone adds. 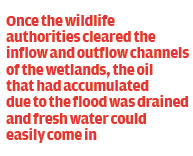 Other wetlands towards north Kashmir, including Shallabugh, Hygam and Mirgund, witnessed a sparse migratory population at the onset of winter. This was because of the drop in the water level due to breaches in the embankments caused by the flood. The breaches have been plugged in Shallabug. Balkol channel, which brings water to the Hygam wetlands, also faced the same problem. The wildlife department says it is working with the Wullar Development Authority to restore the channel. All of this was done with the existing manpower and available funds.

Another apprehension of the ecologists was disease among the migratory birds, especially when bird flu has been reported in many parts of India. But there has been no such case in Kashmir so far, according to the government. Migratory birds are also susceptible to poaching as they can fetch a hefty price. Lone claims that no case of poaching has been reported this season.

The large number of seasonal birds is undoubtedly good news for the state’s wildlife. However, it is not a yardstick to negate the adverse impact of the flood.

The wildlife warden admits that the flood has damaged the ecosystem, but the government is yet to initiate a study on the long-term effect of the natural calamity on the environment. “We are still recovering and it will take time to analyse the destruction caused by the flood,” he adds. 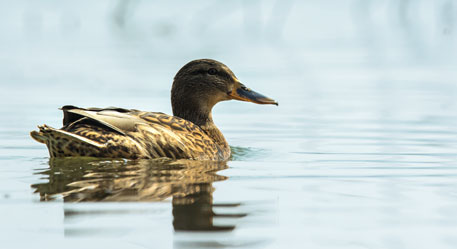 Shakil Romshoo, head of the Department of Earth Sciences in the University of Kashmir, emphasises the need for a comprehensive study. “Lessons learnt from environmental studies can be applied to assess, prioritise and mitigate the potential for environmental contamination in case of extreme flood events in future,” he says.

Another reason for a study is the variability of water contamination. The Jhelum, which feeds the Valley’s water bodies, flows from the foothills to the plains. The sources and type of contamination of its water in the hills would be different from that in the plains. Specialised knowledge is needed to understand and analyse such differences. Romshoo says the wildlife department does not have capable experts and that scientists and academicians should be roped in for the purpose.

He has extensively studied the state’s wetlands based on satellite data and research from 1969 to 2008. He observes that the wetlands’ open water area during this period has shrunk from 18.75 sq km to 13 sq km, and blames siltation for the poor health of the wetlands.

The wildlife department claims that its main focus is on the management of these water bodies. “We have already submitted a report to the government regarding the financial support needed for their restoration,” Lone says.

But the most pressing problem of all is encroachment. Environment experts have called for urgent action.

Asad R Rahmani, director, Bombay Natural History Society, says, “Encroachment is a major concern regarding the destruction of the natural habitat of birds. Just as there are efforts aimed at forest conservation, there must be efforts to preserve our wetlands.”