It's been a century of research and implementation of malaria control strategies. But the disease continues to claim three million lives every year 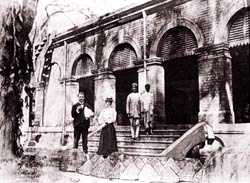 when Ronald Ross established in 1897 that malaria is caused by a parasite that is transmitted by mosquitoes, scientists knew little about the disease. Diagnosis was difficult and epidemics common. A hundred years after Ross launched the study of the epidemics of malaria, his contribution is still worth recounting.

Ross's work on bird malaria was extended to humans by Italian researchers, and became the mainstay of research on parasites until a couple of decades ago. His contribution on the mechanism of transmission of the disease and on methods to prevent epidemics (epidemiology) were unique contributions that established the importance of vector control (see box: The genius of Ross ). In fact, were it not for opposition to his ideas, more progress could have been made in malaria epidemiology in the 1930s and 1940s.

Ross was clear on selection of methods to control spread of malaria. He admitted that combining vector control with other approaches could be a better solution to the problem - a strategy that has been adopted in recent global initiatives. But Ross stressed a top-down public health approach (that put the burden on governments) over medical care and community involvement in controlling malaria. Today, there is global consensus among scientists and health workers that community involvement is indispensable in fighting malaria.

Ross influenced the work of many scientists and institutions orientated towards tropical health, but was in part responsible for differences in approach to malaria control. In India, the Mian Mir experiment to control mosquito breeding was inspired by Ross's work. But it failed due to technical reasons, causing disagreement among scientists over the value of vector control. S P James - the first person in charge of the experiment - and Ross became bitter opponents. This created a split amongst scientists and administrators who favoured vector control and those who preferred multiple approaches of a more general type. James used his influence in the Malaria Committee of the League of Nations Health Organisation, which belittled control of mosquito breeding throughout the 1930s. The controversy lasted through 'the eradication era', when insecticides like ddt were widely used.

Estimates at the end of the 1940s indicated that globally, malaria was responsible for the death of some three million people each year and directly affected the health of more than 300 million. This was more than the incidence of any other tropical disease. Malaria epidemics were common in Africa and Asia, particularly Southeast Asia, and Central and South America. In 1935, J A Sinton had estimated that malaria in colonial India caused the death of about one million people annually and was indirectly responsible for the death of another two million.

In response to this alarming situation, the who in 1955 launched the Global Malaria Eradication Programme ( gmep ), aimed at countries in which the disease was endemic. The gmep was based on widespread household spraying of ddt and use of antimalaria drugs, mainly chloroquine. By 1967, malaria was eradicated from all developed countries and many areas in tropical and subtropical Asia and South and Central America. Between 1955 and 1967, the population freed from the risk of the disease had increased from 220 million to 953 million and direct mortality to less than one million. In India alone, the annual number of deaths due to malaria were reduced to 1,000, and reported clinical cases to about 100,000.

Looking back, it is easy to see that a solution was sought by over-simplification and standardisation of strategy and that many programmes lacked a reliable information base.


Soon, anopheline mosquitoes started developing a resistance to ddt and the parasite to chloroquine. The malaria eradi-cation strategy was re-examined in 1969. Financial support to antimalaria programmes from international and bilateral sources was reduced, except by the who . Programmes were further affected by the economic and financial crisis of the 1970s, when insecticide, drug and shipping costs rose steeply. Malaria staged a comeback, mainly in India and Brazil.

This led to renewed interest in national malaria control programmes. The who , in collaboration with the World Bank and the un Development Program, launched the Malaria Action Programme in 1979. The pessimism of the mid-1970s changed in some quarters to guarded optimism. The mood at the Alma Ata conference in 1978, where a malaria control strategy based on the phc principle was formulated, was hopeful. A number of countries developed malaria control programmes based on this approach. But their implementation was slow. The situation in most Asian and Latin American countries remained stable or deteriorated, while most of Africa continued to face a crisis. A consistent improvement was only seen in China, Vietnam and some north African countries. These improvements are attributed to large-scale use of artemisinin and its derivatives for treatment of malaria, insecticide-treated bednets (7.9 million people protected) and insecticide spraying (4 million protected).


One of the major problems most developing countries face is the increase in the number of agricultural and industrial development projects. These have led to extensive population movement from non-endemic to highly malarious areas. Climate and ecological changes favourable for malaria transmission have also contributed to its spread. New drugs and operational research on containing the crisis are required. These, in turn, require global commitment - both financial and social. Awareness of malaria must spread, communities must be involved, and more finance set aside to make malaria control programmes across the world sustainable. n