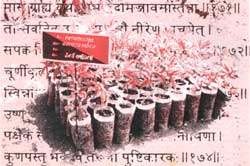 PESTICIDES: universally derided for being the bane of today's environment. Used worldwide without adequate checks and safeguards, they infiltrate soil, air and water, ravage food chains and play havoc with human as well ecological health. India accounts for one-third of the total pesticide poisoning cases in the world. The us National Academy of Sciences has noted a 64-fold increase in pest resistance to pesticides in less than 50 years. In 30 years, warns the Academy, pesticide use has increased 12-fold but crop losses due to pests have doubled.

The Vrikshayurveda, a branch of medicine from the ancient ayurvedic tradition offers a remarkable solution to this enduring problem. Three texts - Varahamihira (AD 505), Chavundaraya (AD 1025) and Sarangadhara (AD 1363) - list traditional cures for protecting sick plants using homespun methods. For the rishis of yore, sickness in plants and humans ocurred more or less due to the same reasons. According to them, ill health followed when the Tridoshas - the three forces which control the functions of the human body - wind (vata), bile (pitta) and phlegm (kapha), became imbalanced. Although the varieties of pests found in the past were considerably less numerous, Vrikshayurveda's methods and remedies remain as relevant as ever because they hinge on improving plant health and building up immunity.

In the methods prescribed by the ancient text, a multipronged attack on pests and diseases is recommended by enriching the soil with nutrients to spur useful microbial activity for their control and elimination. Efforts to scientifically validate some of these traditional natural plant medicines have been made recently by plant pathologists Ramachandra Reddy and A L Siddaramaiah of the University of Agricultural Sciences, Bangalore.

In the prescribed methodology of treatment, keeping the seeds healthy and soils free of marauding pests have been accorded primary importance. The text records that seeds from fruit trees falling on the ground should be mixed with cowdung and dried for five days. Following which, they should be dipped in milk for another five days, soaked in water, treated with a mix of coconut water and eggplant and finally exposed to the incense of cow milk ghee (clarified butter) and Embelia ribes burm (vayuvilanga). The incense contains sandalwood Canarium strictum (ordinary dhoop).

However, C strictum is fast becoming rare. The incense is prepared by placing the concoction over burning charcoal. These incenses are believed to be extremely useful for treating maladies in human beings as well. The next step is sprinkling the seeds with water before sowing. Such methods will improve germination and sprouting, states Lokopara, Chapter iv, Vrikshayurveda.

To protect seeds from diseases, they should be soaked in cow milk for 10 days and taken out every day with palm greased with ghee rolled in cowdung, which is mixed with the flesh of deer or hog. These treated seeds can then be planted in soil, which in turn is treated with sesamum. The sown seeds must be sprinkled with milk and water.

Elaborating on the importance of cowdung and urine in the methodology under discussion, Reddy says that the dung is processed inside the body of the animal, where the temperature is higher than that in the human body. Once the dung is excreted from the body, rapid changes occur in the composition of its microorganism content. Those microorganisms which have the potential of attacking and eliminating plant pathogens, grow fast and target the disease-causing germs in plants.

However, cowdung - a pest killer and growth regulator cannot be sprayed directly onto affected plants, since it causes retardation of growth. Instead, it should be sprayed in the form of a decanted solution: a 1: 10 mix of dung and water.

Diseases which owe their genesis to wind can be fought by applying clarified butter to the seeds. Diseases caused by phlegm can be treated with acidic substances mixed with hot water. If trees are affected by pests, they require surgery: the disease -stricken part has to be surgically removed. A paste made of Embelia ribes, cow milk ghee and silt should be applied to the operated part, which then needs to be sprinkled with water and milk. Plants afflicted with tubercles all over their bodies can be treated with an application of the Symplocos racemoss flower, cowdung and kunapa water (made by boiling flesh, fat and marrow of deer, pig, fish, sheep, goat and rhinoceros in water). This is then mixed with milk, sesamum powder and oil cake pulses boiled in honey, along with a concoction of clarified butter and hot water in an earthen pot. This mixture must be left alone in a warm place for a fortnight.

Plants attacked by pests can be treated with a mixture of fresh cow urine, clarified butter, Embelia ribes burm, mustard and sesamum. All this can be applied to the trunk and then watered with milk and water. Cow milk, curd, ghee, cowdung and cow urine all have qualities which protect plants. The Panchagavya - five products from the cow - are considered sacred and purifying. In ayurveda, Panchagavya grilha prepared from all these five products is used to treat epilepsy, jaundice and fever.


Reddy and Siddaramaiah carried out two experiments with different preparations of Panchagavya. The first was aimed at controlling seedling disease and wilting in tomatoes, caused by the fungus Fusarium oxysporurn f sp lycopersic. The second was for controlling the deadly Panama disease which strikes bananas, leading to the growth of yellow pseudostems. These stems are weak and create vertical splits on the plant body, leading to its collapse; the disease is caused by the soil-borne fungus Fusarium oxysporum cubense, which can remain active for 50 years once it enters its preferred habitat. In the tomato, the fungus invades the plant's roots. The leaf veinlets become translucent and leaves turn yellow with discoloration of the vascular tissue. Eventually, the whole plant wilts and dies.

Researchers trying to discover a cure for this disease used the Pusa Ruby variety of tomato as a test plant. The seedlings were raised in cement pots filled with sick soil and were isolated from other attacking organisms in a nylon net house. The traditional Panchagavya was modified by adding yeast and common salt. This mix was fermented for seven to 10 days in a closed container and periodically stirred. The fermentation was diluted 10 times with water and filtered through two layers of muslin cloth, after which the clear filtrate was used for dipping seedlings and drenching the sick soil. Out of the three combinations which were tried, the third - named Modified Panchagavya 3 (MPG-3) - was found to be the most effective. The lowest percentage of disease incidence was in zero dilution.

Even in a diluted form, the MPG-3 was significantly effective in reducing seedling and wilt diseases. Single components of Panchagavya, when applied to sick soils, failed against the Fusarium pathogen. However, in combination and fermented for 10 to 14 days, there were no phytotoxic effects noticable on the tomato foliage. The MPG-3 provided encouraging results in pot culture on par with potential biocontrol and chemical control agents. Its soil application was a relative success as well, compared to seedling dip. The population of Fusarium oxysporum cubense declined after 150 days of planting.

A group of innovative farmers led by Purushothama Rao, who runs an organic farm in Thirthahalli, Karnataka, have been experimenting with indigenous methods of agriculture. According to Rao, spraying a dissolved urine solution (1:10) helps not only in killing pests, but also augments production of paddy upto two-three quintals per ha. Rao had conducted trials with samples of urines of ordinary, milch and pregnant cows as well as working oxen. Of these, the urine of pregnant cows was found to be the most effective.

Rao proposes a mixture of one litre (1) of a pregnant cow's urine and 50 gms of vayuvidanga powder in one I of water. Another concoction that he suggests is a mix of one kg of vayuvidanga leaves in 10 1 of cow urine fermented for 15 days, and sprayed after mixing with 100 1 of water.

Although their methods have not been tested scientifically as yet, according to the Thiruthalli farmers, diseased plants can be cured with a decoction of the leaves of Lasiosiphon eriocephalus (Mukudaka), Strychnos nuxvomica (Kasarkayi), Azadirchta indica (Bevu) and Agave americana (Kattale). The mixture is made by soaking one kg of any of these leaves in a bucket of 10 1 of boiling water. This is allowed to ferment for 24 hours in the sun. The solution is decanted and ready to to be sprayed at 1: 10 dilution. In order to control fungal or viral diseases, the leaves of Acorus calamus (Baje) can be used. The leaves of the Tragia involucrata occidentale, Annon squamosa (custard apple), Calotropis gigantea, Pongamia glabra, Piper betle, Lantana tiliaefolia, and Acorus clamus are used to control bacterial or viral attack on the roots of coffee and cinnamon.

The insecticidal properties of 45 species of plants were tested on four caterpillars in Mysore recently. The experts conducting the study documented that seeds of Tephrosia candida and Annona aquamosa, and the stem bark of Mundulea suberosa possessed high degrees of insecticidal potency. For acquiring spray emulsions, the hot industrial alcohol extracts of suberosa bark and T candida seeds have to be mixed with molasses and diluted with water.

Although the hazards of pesticides are well known, serious researches into alternative remedies have not been forthcoming. Reddy and Siddaramaiah's work, proving the disease-containing biochemical properties of Panchagavya, is of considerable significance in this context.

Out of all the claims to the remedies, basically made by ancient Sanskrit treatises, there are several that have not been tried out at all. Those which have been tested in laboratories have shown brilliant results. However, the tabulation of results and technical details are still in a state of preparation and would take some time to be available to keen practitioners.

According to Reddy, the University of Agricultural Sciences has already made available the relevant data to tlie Regional Research Centre at Mandia, Karnataka. At the time of writing this feature, field experiments were still in progress, mainly on 16 sq ft plots. The studies are expected to come up with conclusions pointing to the viability of all these formulations as commercial propositions.

(Based on a paper presented at the 13th International Plant Protection Congress, The Hague, The Netherlands, 1995, by M G Chandrakanth, HR Reddy, A L Siddaramaiah, B Padmodaya, S Jahagirdar and N Basavaradhya)