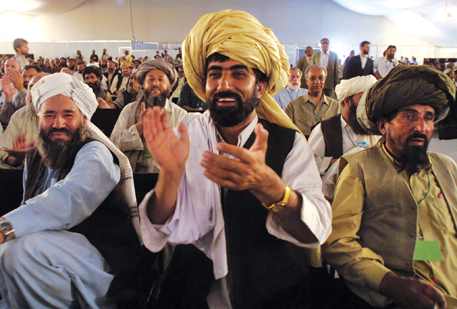 On November 21, Afghanistan’s president Hamid Karzai opened a mass gathering of representatives from various ethnic, religious and tribal communities in Afghanistan. Called Loya Jirga, the assembly of 2,500 delegates will weigh in on the role of US troops after their combat mission ends in 2014. Under a tentative US-Afghan deal, a reduced number of US troops will remain in Afghanistan, primarily to train and assist the Afghan military in its battle against the Taliban.

If the Loya Jirga backs the deal, it will give Karzai political clout to accept the agreement. But if the assembly opposes any part of the deal, things will get really complicated.

There is a paradox here. Loya Jirga is not an official decision-making body. Its decisions are not legally binding and its verdicts must be approved by the two houses of the Afghan Parliament and the president. Unofficially, however, the Loya Jirga’s decision is seen as final, with the president and Parliament expected to rubber stamp it.

Meaning “grand council” in Pashto, the Loya Jirga is a centuries-old institution that has been convened at times of national crisis or to settle national issues. This method originates from the pre-Islamic local practice called shura or consultation. Jirgas (councils), small and large, are a common feature in the Pashtun areas of Afghanistan and Pakistan. They are the central part of the traditional dispute-resolution mechanism in tribal Pashtun society, in which the disputants accept a mediator—usually a religious leader or a village notable—to hear both sides in front of a mass of people.

Sociologist Hassan M Yousufzai writes, “The jirga is best summarised as a strategic exchange between two or more people to address an issue through verbal communication. The exchange may or may not result in an agreement. But the process itself leads the parties to maintain a certain level of formal communication, thus ensuring peace.” Yousufzai believes the system has its origin in the necessity for peace in an area where resources were scarce and fiercely contested and inter-tribal warfare was frequent. The Loya Jirga is an assembly of all jirgas. Historically, it has been convened to approve a new constitution, declare war, choose a new king, or to make sweeping social or political reforms.

Loya Jirga has a history of standing against the powerful. During World War II, Afghanistan withstood enormous pressure from global powers to remain neutral because the Grand Council decided to maintain distance from the warring alliances. In the late 1970s and the 1980s, it refused to give legitimacy to Afghanistan’s Soviet Union-sponsored government. It has approved all the five constitutions of the country. The most famous Loya Jirga took place in 1747, which chose Ahmad Shah Durrani as the king who founded the state of Afghanistan. The current government in Kabul was itself forged through jirgas.

Many social scientists believe the jirgas are discordant with democracy. “In most of the jirgas, rulers strived to impose their own plans and objectives on the people. The fact is they misused the jirgas,” writes Afghan political analyst Mohammad Amin Farhang. But Yousufzai notes, “The jirga’s processes are flexible and delicate, not well understood by the outside world. At the same time, the jirga still has enormous impact on the lives of the Pakhtuns, particularly those living in areas where the government’s influence is low.” Yousufzai, however, notes that the council is deeply patriarchal and has sanctioned honour killings in the past despite evidence of women participating in the early jirgas.