A Swiss canton that banished cars

A Swiss canton that banished cars 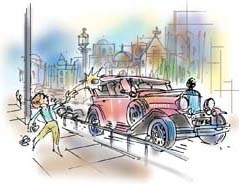 Car dependency may now have become a serious problem, but in 1882, when the German car maker Karl Benz took out his rudimentary internal combustion engine for a test drive in the streets of Stuttgart, he was arrested. The French count Albert de Dion fared no better. When he tried to produce his steam automobile commercially, his father got a court to restrain him.

But by the beginning of the 20th century, de Dion and his partner George Bouton had become car barons. So had Benz. Newspaper reports in Europe and America glowed with enthusiasm about the car. The first issue of the American automobile magazine, Horseless Age, waxed eloquent: "The growing needs of civilization demand it. The public believe in it."

Actually, not everybody started believing in the car even then. People of the Swiss canton Graubnden were among the sceptics. On August 24, 1900, the government of Graubnden banned all automobiles from all its roads "to turn the canton into a peaceful oasis where everybody will be safe from the automobile's nuisances". A year later the canton of Uri imposed a similar ban.

The ban sparked off a propaganda war, featuring pamphlets and polemics. Apologists for motorisation harped on the difficulties posed by horses, exaggerating the stink of horse manure and swarms of flies. Those opposed included saddlers, coachmen, nature lovers as well as people along the main roads. They were scared of accidents, dust, noise and smell, and most importantly, apprehended ouster from the roads.

Antipathy against the car prevailed in many other parts of Europe and America. According to historian Katie Alvord, "Not only were the poor publicly reminded of their poverty when motorists drove by but cars began eating what little they had: public spaces." In many places, resentment against car owners inspired stone-throwing episodes. In 1904, this became so rampant in New York neighbourhoods that the police had to be pressed into action. Two years later, the then us president Woodrow Wilson expressed the concern that cars allowed their owners to display their wealth so ostentatiously that people would be driven to socialism.

In other places the car became associated with national pride. Just before World War I, the German Riechstag saw the car as a symbol of national resurgence. "The progress of our industry and nation depends on automobilism," wrote a German paper.

The term automobolism was, in fact, made popular by the Austrian anti-automobile campaigner Michael Freiher von Pidol. In a 1912 pamphlet, he wrote, "Where does the motorist get the right to master, as he boasts, the street? It no way belongs to him, but to the population as a whole. Automobile traffic involves the constant endangerment of passers-by or other vehicles, as well as a severe infringement of community relations that correspond to an advanced culture." The pamphlet noted 438 car accidents with 16 deaths in Vienna in the first half of 1912. Seven children were killed in the latter half of the year von Pidol wrote.

In Graubnden, the car ban withstood nine referendums. But by 1919, the ban was relaxed to allow public transport to ply. Actually the Swiss PostBus. Started by the Swiss Postal Service in 1906, the bus initially linked capital Berne to the family-vacation town of Detligen. Beneath heavy sacks of mail lashed onto the roof of their omnibus, a dozen or so passengers sitting on hard wooden benches paid modest fares to take the hour-and-a-quarter commute over 10 km.

But it took very little time for the bus service to establish itself, and the bright yellow PostBus was a much loved feature of life in other parts of Switzerland by the time it was introduced in Graubnden.

After the war, hundreds of military trucks were converted for the conveyance of goods and people by the bus company. The ban on private motor cars too came to an end in the Swiss canton in 1921.

PostBus retains its popularity in Switzerland. In the early 1940s, engineers endowed the buses with the face of a good-natured St. Bernard--with the slanted black radiator grill recalling a dog's muzzle and the separated, gently downward-bent windshield its big faithful eyes. Even later, as the so-called "muzzled Postbuses" gradually disappeared, the buses manufactured by the Swiss company, Sauer, continued to adhere to this friendly-face principle.

The new flat radiator grill of the bus resembled a mouth, the Sauer emblem with its chrome mouldings a moustache and the fresh-air inlets at the front a set of expectantly raised eyebrows.