The Burmese people are a great exponent of slow food 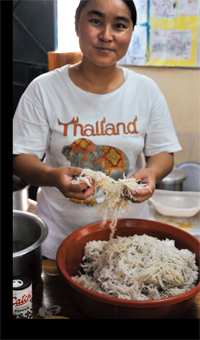 “Kyammar bar zay” goes a traditional Burmese greeting. Loosely translated it means, “May you be healthy”. It’s an expression of a culture that lays great store on contemplation and meditation. The Burmese take these values to their kitchens and eating tables. They like to spend time over each meal. The complexity in Burmese food is found more by focusing on each morsel and letting the flavours reveal themselves slowly rather than expecting them to immediately overwhelm the taste buds. No fast food gulping here. The meals are small, yet elaborate.

The family gathers at a low table and each dish is passed around following the bowl of rice. Then follows a round of diners helping themselves to the appropriate accompaniments or condiments. The rice is mixed with the items on the plate and eaten with fingers, though some have begun using chopsticks. The accompaniments are ngapi—a shrimp-based paste, balachaung—a crispy combination of shrimp, garlic onions and several raw vegetables including cabbage, and mini-eggplants. There is an assortment of salads. A favourite is ta-yet-tea-tow—the green mango onion salad. Burmese cuisine is very often described as a fusion of Indian, Chinese and Thai cuisine.

That’s unfair. The Burmese, like almost all people, have absorbed influences from their neighbours. But the cuisine also gets its flavours from the thousand cultures that is Myanmar—the original name of the country was pyi htaung zu bama naingan daw or one thousand countries united into a royal Burma. Food-sharing was elemental to cementing social and political relationships. In mediaeval times, it was not unusual for a Shan chieftan to call on his Kachin counterpart for a breakfast to cement an alliance. If the occasion 48 Down To Earth • June 1-15, 2009 A thousand flavours The Burmese people are a great exponent of slow food Ayeming, a Burmese expat in Delhi, works on her rice noodles PHOTOGRAPHS: MEETA AHLAWAT / CSE was celebratory, the meals would get exuberant—by Burmese standards.

The platter would then contain desserts such as mont lone yay baw (round cakes floating on water) or mont see jaw (fried chewy pancake). But most times, friendships would be struck and old enmities forgotten while the subdued flavours of the mohingar unravelled. Many cookbooks describe the dish as a fish soup. That is doing injustice to Myanmar’s unofficial national dish. For convenience’s sake, one might describe mohingar as rice noodle in a fish-based broth of onions, ginger, and lemon grass, topped with sliced banana blossom, and fritters (akyaw). But there are many variations, and each family lays much pride in its recipe. Myanmar even has a national mohingar competition.

If there is a competitor to mohingar for Myanmar’s national dish, it is khwauk swe. It is as delectable. Essentially a light chicken soup served with noodles, khwauk swe has variations in keeping with its popularity across the country’s different ethinc groups. Many claim the ohnoe khwauk swe as the original. It’s a well-brewed broth made of chicken stock—many add coconut to thicken the gravy. The individuality comes from the condiments and seasoning: green chillies, crushed red pepper, coriander, spring onions, lemon juice and fish sauce.

The broth made in Shan kitchens is thicker and spicier. And some prefer mutton instead of chicken. In an Indian city, a Burmese eatery would be harder to find compared to a Chinese or Thai eatery. It’s a pity for this delectable slow food deserves outlets.

Cook noodles till tender.
In a large pot, place a bed of lemon grass
stalks—keep aside the
tender parts. Add the
fish, two tablespoon of
fish sauce and cover with
water.
Boil till the fish is
cooked. Take the fish out,
debone. Wash the bones
and pound them. Return
to the broth. While this
boils, pound the tender
parts of the lemon grass with the ginger
and garlic to a paste.
Now strain the broth to a clear liquid
and add the lemon grass-ginger-garlic
paste. Add sliced tender banana stem;
bring to the boil and season with pepper
and salt to taste. Mix the rice noodles with
a big ladle of soup and a garnish with
coriander leaves and roast chilli powder.
To make a little crunchy add some chick
pea fritters (akyaw)
Serves four to five people
Khwauk Swe

heat, drain and set aside. Combine garlic,
ginger and salt in a large bowl. Add
chicken strips, and coat each piece with
mixture.
Heat oil in a large saucepan over
medium heat. Add onion and tomatoes,
and cook, stirring and sprinkling pepper,
salt and turmeric. Cook until onions soften
and mixture thickens, for about 5 minutes.
Add chicken and a cup of water,
reduce heat to low, cover and cook for
about 10 minutes, or until mixture thickens.
To serve chicken over noodles.
Garnish with coriander and crushed
peanuts.
A dash of lemon juice accentuates the
flavour of the spices