The pickle of gongura herb is a must with every meal 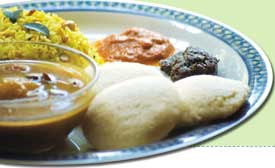 THE gongura herb (Hibiscus cannabinus) is an integral part of the cuisine in Andhra Pradesh (ap). The mouth-watering chutney made from its leaves is a delicacy.

Even in other parts of the country, the herb is widely consumed -- in the Hindi/Urdu speaking belt it is called pitwa; in Maharashtra it is identified as ambada ki bhaji; in Karnataka and Tamil Nadu it is known as pundit and pulichai keerai respectively. In West Bengal it is called nalite saga and in Orissa mestapat.

H cannabinus has two varieties, depending on whether the colour of the stem is green or red. The leaves of the red stem variety are quite sour. In coastal Andhra Pradesh, the green stem variety is popular, while in the Telangana region, the red stem variety is extensively used. The herb is sold in bunches (along with its roots). The gongura pickle made in the Guntur district of ap is most spicy and can be stored for up to four months.

The herb is rich in iron, vitamin c, other vitamins (like thiamine, riboflavin, and niacin), proteins, carotene (an anti-oxidant), calcium and carbohydrates.

Gongura acts as an appetiser. Perceived to be an important part of a woman's diet by the ardent followers of traditional knowledge, this fibrous herb even helps digest food. A paste of ajwain (carom) and salt put on gongura leaves (heated on the tawa) helps get rid of thorns and body corns. The oil from gongura seeds can be used for cooking. Its strong fibre is also used for making ropes.