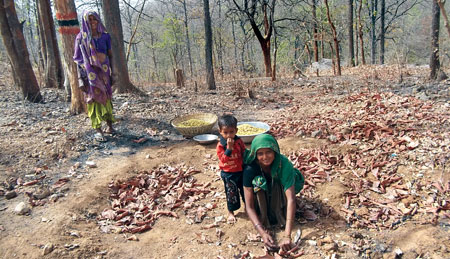 In what could set a precedent for forest rights struggles, six villages in Madhya Pradesh have stalled a government plan to notify their forest as wildlife sanctuary. Gram sabhas of these villages have passed resolutions against the proposed Katthiwada wildlife sanctuary in Alirajpur district. While the government is yet to come to a decision, forest officials say the project may never see the light of the day.

Residents of these villages in the core area of Katthiwada say the government decided to declare their forest a sanctuary and relocate them without their consent, which is a must under the Panchayats Extension to Scheduled Areas Act of 1996. The villages are inhabited by Bhil, Bhilala, Patelia and Koli Baria tribes. Most of them are marginal farmers and supplement their income by selling mahua flowers, tendu leaves, chironji, gum, lac and honey collected from the forest. The estimate of wildlife density, on the basis of which the government is declaring the forest a sanctuary, is exaggerated, they say. “We do have leopards, tigers, bear, monkeys, peacocks, blue bulls and deer in the forest,” says Raju Raichand Sapnya of Motibar village. “But their numbers have dwindled in the past two decades due to rampant illegal logging.” Guman Sapnya, panchayat member of the village, adds, “We see very few footprints or carcasses these days. Even at waterholes, traces of wildlife have become fewer. What is the point of notifying it a sanctuary?”

The proposal to declare the forest a sanctuary has its genesis in the Sardar Sarovar dam project on the Narmada river. One of the conditions for its environmental clearance was to create alternative wildlife habitats to compensate for the losses of vast forest areas—more than 110,000 hectares (ha) in Gujarat, Maharashtra and Madhya Pradesh.

In 2007, the state forest department published a feasibility report and said very soon the government would notify the Katthiwada forest a wildlife sanctuary (see ‘Out of obligation’). Villages in its core area—Nakti, Kewda, Kusumba, Nanibar, Motibar and, Partapura and a hamlet, Kheda—are to be relocated.

Many strangers have visited the area since, say the residents, some to survey the flora and fauna of the forest and the others to inform them about the government’s decision. But no one ever consulted the residents, living in the forest for generations. Every village has a different experience to share.

“About three years ago, four people in civilian clothes visited our village,” recalls Narya Bhabria of Nakti. They spread out a map and told us that six villages in the forest, including ours, will have to relocate. It was afternoon, and only three residents were present in the village. We told them we did not want to relocate and offered to call others for consultation. But they left, saying it was a Delhi decision. The residents learnt the details from other villages and from Khedut Majdoor Chetna Sangh, a nonprofit, which helped the gram sabhas draft the resolution.

“All we received was an order to relocate,” says Guman Sapnya of Motibar. “Two years ago the forest range officer came to the village and told us that we would be evicted if we did not relocate.” In Kusumba, officials of the revenue and forest departments held daily meetings trying to browbeat people into giving consent. Sarpanch Chiman Aundia Sapnya says, “They threatened us with police action if we did not vacate our homes. We could not do any work because of the daily day-long meetings.”

The gram sabha of his village was the first to pass a resolution opposing the proposed sanctuary and their relocation from the traditional land. They also wrote letters to the chief minister, the divisional forest officer (DFO), district collector and the Union minister of state for environment and forests, apprising them of their decision.

Next month, in August 2010, gram sabhas of the other five villages passed resolutions opposing the project. Their revolt has now spread to other villages. Twenty-four villages located on the fringes of the proposed sanctuary oppose the project. They say it would curtail their rights to graze livestock in the forest and collect minor forest produces.

Residents say they are not against conservation. Katthiwada is the only thick forest in the region. Timber gangs from Gujarat have destroyed forests in other districts and are eyeing it. “But converting it into a wildlife sanctuary is not the remedy,” says Guman Sapnya. “We have lived here since the time of the kings and protected it. Even now we patrol the forest in turns and inform the forest department when we spot timber thefts,” he adds.

In Nakti, for instance, forest officials seized a truck-load of illegal timber three months ago following a tip-off from villagers. “Instead of evicting us, the government should give us the forest and help us protect and conserve it,” demands Sanya Dhanuk from Nakti.

The issue is not of protecting species as the forest department sees it, says Munsingh Sapnya of Motibar. “We are part of the forest. It can’t be protected by removing us,” says the 90-year-old. Following opposition by the gram sabhas, the forest department is maintaining silence. When contacted about the status of the proposed sanctuary, the principal chief conservator of forests (PCCF), A K Dubey, refused to comment.

PCCF (wildlife) H S Pabhla and conservator of forest L K Sood, who is working on the Katthiwada project, said they would abide by the government’s decision. DFO Ashok Kumar Singh said in view of the villagers’ protests, the government is considering converting the forest into a conservation reserve instead of a sanctuary. “This mean no relocation and just strictures on people living around the reserve,” he explains. Officials did not indicate if they would be consulting the affected people this time.
Katthiwada wildlife … Tribals Timber Smuggling Sanctuaries Relocation Panchayats Narmada Valley Project Minor Forest Produce Madhya Pradesh Jhabua (D) Gram Sabhas Forests Forests Forest Personnel Forest Conservation Conflicts Conflicts Panchayats Extension … Sardar Sarovar dam Special Report Special Report
SUPPORT US