Transformation in agriculture needed to cope with climate change 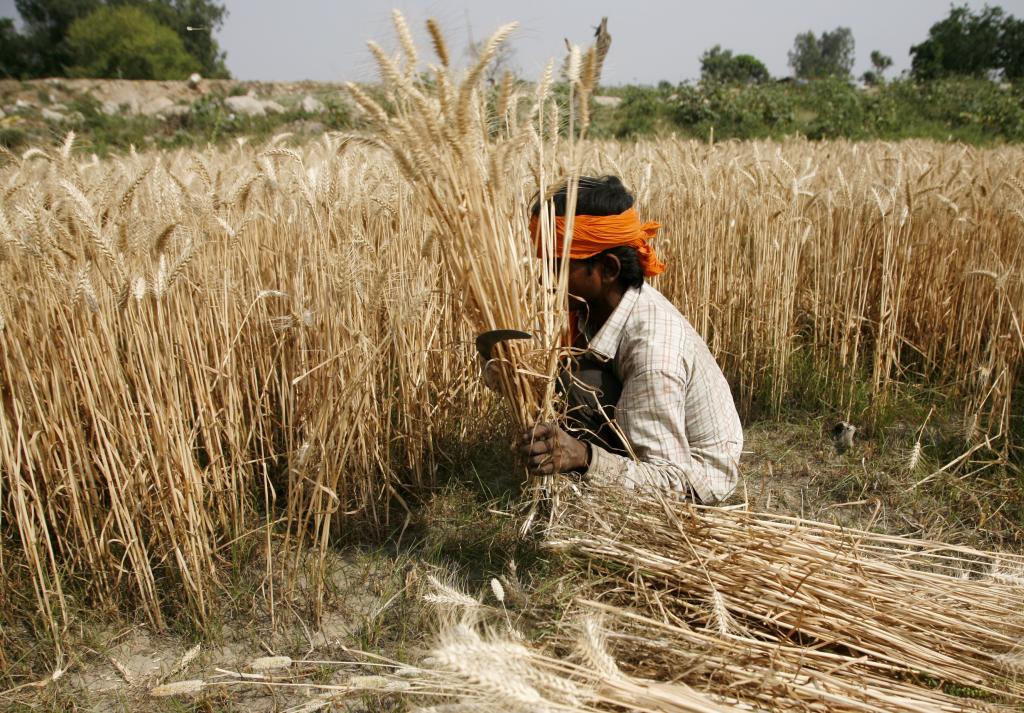 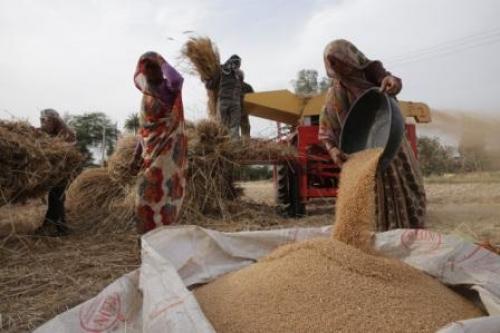 The report warns that a warmer world will significantly reduce agricultural productivity. Shortage in food supply will lead to increased food prices and impact millions of poor people.

It points out that a “business as usual” scenario can increase the number of poor by between 35 and 122 million by 2030 relative to a future without climate change. The poor in sub-Saharan Africa will be greatly affected.

“…climate change threatens all dimensions of food security. It will expose both urban and rural poor to higher and more volatile food prices. It will also affect food availability by reducing the productivity of crops, livestock and fisheries, and hinder access to food by disrupting the livelihoods of millions of rural people who depend on agriculture for their incomes,” FAO Director General José Graziano da Silva says.

“Smallholders face a broad range of barriers, such as limited access to markets, credit, extension advice, weather information, risk management tools and social protection. Targeting resources to reduce barriers for adoption by farmers is one important area for effective adaptation and mitigation. This means putting in place the institutions that can provide the needed climate information, facilitate access to credit and provide extension services,” Jakob Skoet, economist, FAO, says.

The report identifies ways to lower emissions from agriculture. For instance water-conservation alternatives to the flooding of paddy fields can reduce methane emissions by 45 per cent. Emissions from the livestock sector can be reduced by up to 41 per cent through the adoption of more efficient practices.

“Production and consumption of meat and dairy is increasingly driven by global population and income growth. This has an impact on global emissions as production and conservation of animal products generally entails bigger emissions per calorie than plant food, particularly when compared to cereals and other staple foods. It is, however, important to bear in mind that many people are malnourished and animal products are important for nutrition. In fact, consumption of animal products is unequally distributed globally. A more balanced diet, also at the global level, between products and between people, can have both health and environmental benefits,” Skoet adds.

“In high-income countries perishable products like fruits and vegetables require significant energy use and corresponding levels of greenhouse gas emissions in the storage, distribution and consumption stages. Careful lifecycle analysis is required to accurately assess emissions associated with different products in different contexts.”

The report points out negative global effects of climate change are already being felt in some cereal crop yields. Climate change will likely to lead to a loss of nutritional quality in staple cereals and trigger new health issues.

“Significant improvement in food security as well as resilience to climate change can be achieved with the introduction of sustainable agricultural practices such as nitrogen-efficient and heat-tolerant crop varieties,” Skoet says

Social protection programmes may help farmers manage risks under climate change. Evidence from Latin America and sub-Saharan Africa shows the clear benefits of social protection in terms of food security, human capital development and economic and productive capacity, even among the poorest and most marginalised.

According to experts, reduction in crop yields and productivity of livestock, fisheries and forestry are more likely to occur in tropical, developing regions than in temperate, developed regions.

How climate change will play a role in food insecurity worldwide 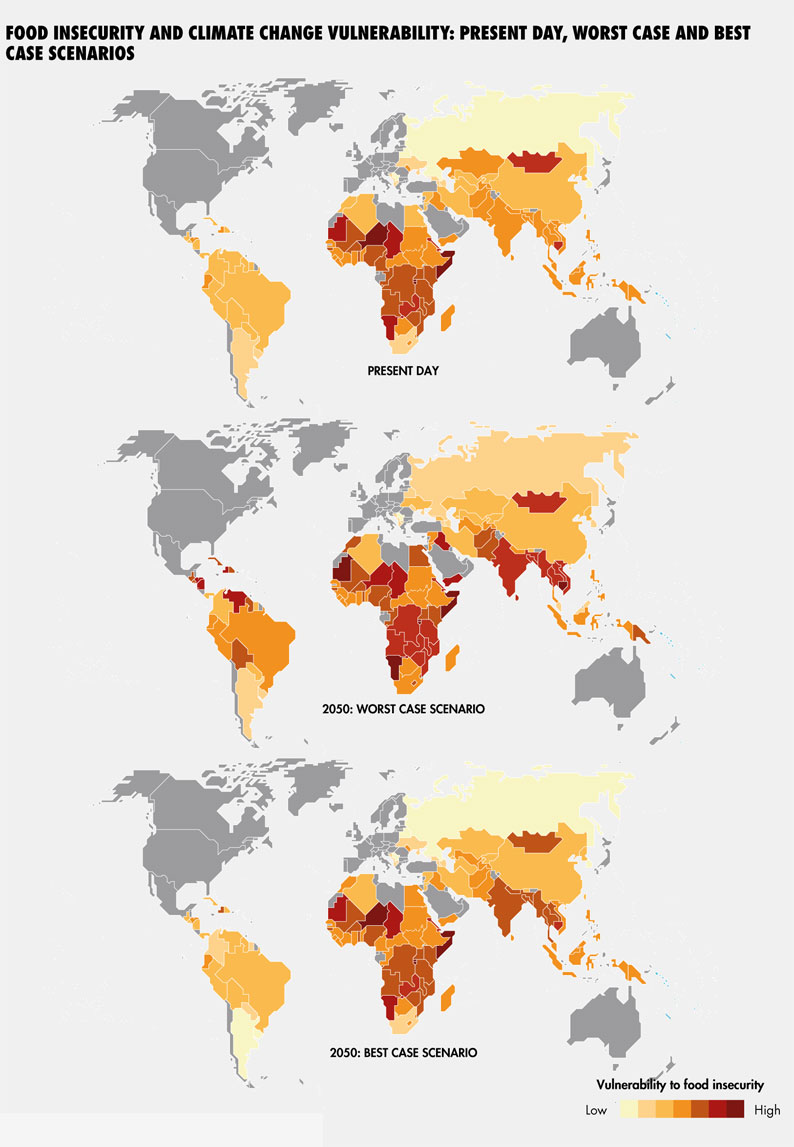 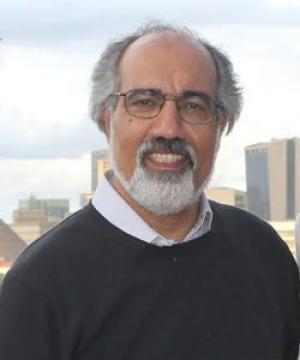 Aziz Elbehri, FAO expert, tells Down To Earth how lower crop yields can be reversed with robust adaptation technologies and investments

In what ways do you think agriculture needs to change to keep pace with increased extreme weather events worldwide?

There are several pathways for a new agriculture, including a new agriculture that combines higher productivity with optimised use of inputs and resources (sometimes also referred to as climate smart or “save and grow”) and an agriculture based on agro-ecological principals and aligned with preservation of ecosystem services, including water, healthy soils and well-managed fauna and flora supporting food production (like pollinators). Successful implementation of these approaches can build resilience and reduce vulnerability to extreme weather events, including drought and floods and frosts.

How far is climate-smart agriculture effective in lowering emissions?

Climate-smart agriculture aims for tripe wins, including enhancing productivity, building adapted forms of production and lowering greenhouse gas emissions when feasible. Lowering emissions is not always given under climate-smart agriculture's objective. While some climate-adaptation measures can also have emission benefits, this is not always the case. It depends on the local conditions and the particular farming system and innovations under consideration.

What do you think will be the global food scenario, especially by 2030? Will we be facing food shortage globally? Do you think yields of major food crops will decline?

It is difficult to predict the future. However, crop climate models predict negative yield impacts from climate change in many hotspots of the world, especially in low-latitude (tropical regions), including much of Africa and many poor and developing countries.

Such a situation can be reversed with robust adaptation technologies and investments, but the expectations currently is that food production is likely to experience major regional shits as well as greater temporal variation with higher supply variability and price volatility, unless appropriate and robust counter measures are implemented. 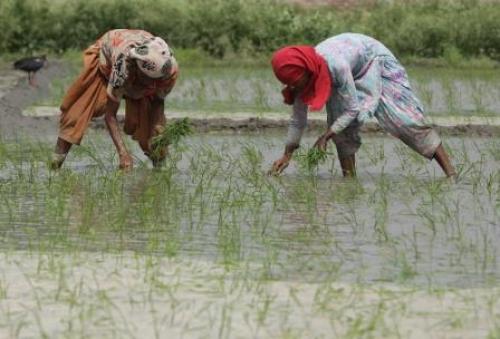 Vietnamese woman farmer Pham Thi Huan received the “model farmer” award on Monday for her fight against climate change in the Mekong Delta.

In an interview given to Down To Earth, Huan said the integration of rice cultivation and duck rearing has improved women’s livelihoods in her country.

Acknowledging women still face certain obstacles in the agriculture sector, the farmer added that creating jobs and increasing income for women can contribute to improving their overall role in the society.

Women play a significant role in agriculture worldwide, accounting for nearly 43 per cent of the labour force in developing countries. According to a FAO report, in South Asia more than two out of every three employed women work in the agriculture sector.

According to reports, the condition of rural women employed in the agriculture sector is worse than rural men and urban women. They experience poverty, exclusion and the effects of climate change, the United Nations says.

The productivity of women farmers is lower than that of their male counterparts and the former is more constrained by limited access to information and services and are less mobile.

The State of Food and Agriculture report says as men and women have different priorities and capacities in responding to climate change, policy-makers should recognise “gender differentials in designing interventions to strengthen the resilience of rural livelihoods”.

Drawing on Senegal’s example, the report adds that information about the time of rainfall onset is important for male farmers as they have access to animals for field preparation. But women lack the capacity to act on the information and prefer forecasts of rainfall cessation and dry periods.

Examples include contracts signed by groups, including women even though they do not own land, investments in training designed to reach women (such as hiring female community facilitators), provision of seedlings of tree species usually desired by women (species that provide fuel wood, fodder, shade and fruit), rotating leadership systems and improvements in women’s access to loans and insurance.

A project in the water-stressed Kumbharwadi community in Maharashtra, India, reduced the amount of time women spent collecting drinking water and fuel wood by installing sources for both nearer their homes. This helped increase women’s participation in village decision-making processes. The project resulted in an increase in the incomes of poor households.

A recent report points out the increasing feminisation of smallholder agriculture, especially in sub-Saharan, as women are increasingly left to take care of family farms as men migrate to cities in search of jobs.

Women farmers provide the majority of farm labour in this region. To aid them, there is a need for private sector-driven mechanisation services centre that will support them to complete farm work on time, Josef Kienzle, agricultural engineer, FAO, said.

Women play a significant role in agrifood systems across Latin America and the Caribbean. “In rural areas, the contribution of women is mostly invisible although they perform a large part of the activities at farm level as well as domestic work and unpaid home care,” Claudia Brito, the FAO gender officer, said.