An earful of high decibels

As the rumble of traffic in the Capital gets louder, experts come up with various ways to clear the clatter

An earful of high decibels 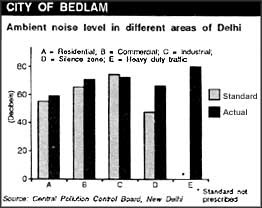 CITY authorities and researchers generally react with a practised, silent ennui to noise contour-mappings of urban areas and the consequent short-lived furore about "impermissibly high noise levels". But for once now, the ministry of environment and forests (MEF), deafened by the amplifying din, has initiated an environmental impact assessment noise study in the Capital that has more bite than bark and is "solution-oriented".

The 3-year study, which began last year, is being conducted by the National Physical Laboratory (NPL) and will:

• Prepare the noise contours of Delhi

• Study the noise index in relation to limits specified by MEF

• Prepare noise level projections for the next decade to assist formulation of policies on city planning, transport and road development and noise-related legislation

• Help to rework noise control strategies
Says S P Singal, former head of NPL's acoustics division, "Studies have established that noise levels in Indian metros are high (see graph). Now we must realise that noise forms a significant component of overall pollution and is inseparable from other pollution-control activity."

Last year, for instance, the Central Pollution Control Board (CPCB) found that vehicles are the major cause of noise in Delhi. Ambient noise levels in residential, commercial, heavy traffic areas and silence zones around hospitals, educational institutions and courts -- each one of them exceeded the standards set (See graph). B Sengupta of CPCB reveals, "The growing number of vehicles has, in fact, overtaken industry as the biggest source of noise and air pollution in the Capital in this decade."

Noise pollution became an offence in India only recently (see box). However, traffic expert Dinesh Mohan of the Indian Institute of Technology, Delhi, points out that Indian public noise thresholds are much higher than in developed countries. But Singal, who was on the technical committee that set the standards, defends this: "We standardised noise levels with the provision that the limits for vehicular and domestic appliance noise should be reduced by 3 decibels (dB) and 2 dB, respectively, every 5 years up to 2005. NPL had even suggested that it could help to develop the technology necessary to achieve noise reduction. This provision, however, was not included in the notifications."
H B Mathur of IIT, Delhi, who chaired the CPCB-sponsored committee which evolved mass emission standards for motor vehicles for 1995 and 2000, says that "the simplest solution to noise reduction" is for vehicle manufacturers to control noise pollution at source by using noise abatement technology."

For cities like Delhi, the CPCB recommends restricting vehicular movement, cultivating greenery between houses and roads, regulating horn use and banning pneumatic horns and diverting traffic from commercial, residential and silence zones. Vehicles contribute the largest share -- 1,296.20 tonnes per day -- to the city's air pollution load of 2,000 tonnes daily. NPL researchers point out that the number of vehicles in the Capital rose from 200,000 in 1971 to 2 million in 1991. Pollution experts like Singal claim that "any long-term strategy for noise control will fail unless overall pollution load is reduced". He points out that when a road becomes congested, authorities simply build another road in the area, "which...results in congestion on both the old and new roads". Mohan says the volume of traffic cannot be controlled by reducing the demand for vehicles or curbing the number of trips per day because these are already low in India, where cars are used only for essential commuting.

However, Mohan says, traffic conditions can be improved by reducing the number of vehicles on the roads, changing the traffic mix and reducing vehicle-generated noise. He lambasts planners for the unequal traffic mix in the Capital. "About 70 per cent of the city's vehicular traffic consists of small vehicles -- Delhi has the dubious distinction of having the highest number of 2-wheelers in the world -- that make the maximum noise per passenger of any traffic form," Mohan says.

He recommends advocating travel by bus and cycle. A well-organised public transport system can reduce the number of 2-wheelers on the road. Pedestrian and cycle traffic, which can wean away 10-20 per cent of the bus load, can be encouraged by making special pathways.

Singal suggests India should follow countries like Singapore, where single-occupant cars are banned and low-occupancy vehicles are charged a fee in designated areas.

Another option is a city metro. Although Singal looks forward to increasing the infrastructure of trains for city commuters, Mohan dismisses this as a mere psychological ploy. "Experience has shown that there can be no significant change in traffic conditions unless the metro network is more than 300 km in length. Delhi has planned for only 160 km in 2 phases for its metro rail," Mohan says. "Besides, commuter trains are feasible only when Rs 25 can be recovered from each commuter for each trip. This is too high for Indians."

Instead, he recommends "traffic calming" as the best method of controlling noise. This would reduce peak traffic speeds from 80-90 kmph to 40 kmph and average speed from 30-32 kmph to 15-20 kmph. Mohan explains, "Slow but smooth-running traffic reduces both noise and air pollution, reduces accident risks and stress on the driver and makes traffic conditions more pedestrian-friendly." This can be achieved by making roads narrower and establishing a proper system of traffic lights and speed breakers.

But the solutions may not be as simple as they sound. As Mathur says, "Noise is a multi-dimensional problem linked to other forms of pollution and has to be tackled by various means: administrative, legislative and technical. Scientists, city planners and authorities must pool together their experiences and expertise to realign perceptions about it."