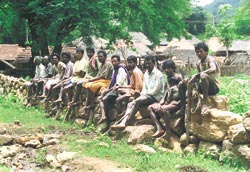 Andhra Pradesh (AP) is the best place to learn how to use a tribal welfare machinery to subvert tribal interests and then use it to counter the polity at large that defends those interests. Three years ago, the state used a body mandated by the constitution -- the Tribes Advisory Council (TAC), supposed to advise the state government on issues of tribal welfare -- to push through a law aimed at facilitating transfer of land away from the tribals. The TAC was headed by the minister of tribal welfare, M Mani Kumari, and included a host of legislators (tribal and non-tribal) and officials.

For its Scheduled Areas, Andhra Pradesh has a Land Transfer Regulation Act 1 of 1970. It checks the transfer of tribal land to non-tribals with due regard to the special status that the Constitution has given to tribal land. It is referred to as the "1/70" Act. In the mid-1980s, the government under N T Rama Rao tried to amend this law. The Union government used the Fifth Schedule to prevent the amendment -- the only time ever that the Centre used this provision. In mid-2000, there was a controversy over the state government's decision to amend it to allow mining of bauxite from the Chintapalle tribal area of Vishakhapatnam district, which has more than 550 million tonnes of the ore used to make aluminium. The state government had decided to amend the law after Dubal, a transnational aluminium company with its headquarters in Dubai, offered to set up an aluminium smelter near Vishakhapatnam with an investment of Rs 4,500 crore (and a captive power plant at the investment of Rs 7,500 crore). The decision to amend 1/70 was rolled back due to pressure from opposition parties and the civil society. But the episode brought to light how a state's tribal welfare machinery can be twisted to not only act against tribal interests but actively undermine the democratic processes that can defend those interests.

A stark example of this co-optation was the meeting of the TAC held on May 24, 2000. The council was to decide on the advice it would give the governor on the proposed amendment to the 1/70 Act. The advocate general of the state government had recommended this course of action to avoid having to table the bill into the state's legislative assembly, which was bound to get embarrassing for the government. Instead, the government chose to put the matter in front of the TAC, get its approval, and send the amendment to the governor for presidential assent (under the special powers vested with the governor in the Fifth Schedule). The irony: the special powers were given to the governor in the Constitution to protect tribal interests, not undermine them. Several civil society groups and political parties were up in arms against the move of the government, showing how once the tribals' land is taken away, no amount of compensation can provide them security of livelihood.

Back to the TAC. The council had unanimously rejected proposals to amend the 1/70 Act on two previous meetings on April 12 and May 10. It is a norm that once a proposal has been rejected by the TAC, it is not brought for reconsideration for the next six months. But within a fortnight, a visit was arranged for the TAC members to go and see how the Orissa government had set up an aluminium plant in the tribal-dominated Koraput district. The TAC was reconvened by the tribal affairs minister and asked to reconsider the amendment of 1/70 Act on May 24. The minutes of the TAC meeting make for interesting reading. Some MLAs were arguing that tribals were welcoming the move. There was mention of a conflict between tribals and non-tribals, but all this was brushed under the carpet. The dissenting MLAs mentioned the several ways in which tribals are cheated out of their land and how non-tribals exploit them. But the council approved of the amendment proposal, with the MLAs of the Congress party and the communist parties dissenting.

Apart from the vociferous protest that the move evoked from the civil society and the opposition political parties, it violated the spirit of the landmark Samatha judgement of 1997. Samatha, a grassroots organisation with a wide network in Andhra, had filed the case in the Supreme Court against the state government leasing out tribal lands to private mining companies in the Scheduled Areas. The court had held that the state government is also to be considered a "person" when it came to mining leases in Scheduled Areas, and had ordered a list of safeguards to ensure that mining does not violate the rights of the tribes and that the profits from mining are shared with the tribals. Andhra government's proposal to amend the 1/70 Act in 2000 actually said that "person does not include the state government". The government clearly wanted to circumvent the safeguards ordered by the Supreme Court. So what the TAC approved under pressure was violating the spirit of the 1/70 Act, the Fifth Schedule of the Constitution, and the ruling of the Supreme Court. By August 2000, public pressure against the amendment proposal became too embarrassing for the government. The chief minister announced that the proposal was being dropped because it was becoming too controversial. Before he did so, a bigger threat had emerged: a move to amend the Fifth Schedule to circumvent the Samatha judgement. And this move came from the Union ministry of mines. On July 10, 2000, the ministry circulated a secret note to the committee of secretaries, proposing an amendment of the schedule to sidestep the Samatha judgement.

The note was leaked to the media, and became a controversy by Decmber 2000. Even Babaulal Marandi, the ruling Bharatiya Janata Party's chief minister of Jharkhand, came out openly against the move. On March 15, 2001, Congress leader Arjun Singh asked in the Rajya Sabha if the Union government planned to amend the Fifth Schedule. The Prime Minister answered that the government had no intentions of amending the schedule to overcome the Samatha judgement. And the matter lay at rest.