Despite Third World pleas for generous grace periods, Montreal Protocol nations have moved forward the phase-out dates for chemicals threatening the ozone layer. The hastening was prompted in part by scary reports of increasing ozone depletion. 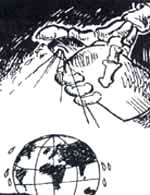 DISAPPOINTMENT among green NGOs and irritation among developing countries over the foot-dragging attitude of some developed countries characterised the week-long meeting in Copenhagen of the parties to the so-called Montreal Protocol. But alarming data presented on the state of the ozone layer, which protects life on earth from the sun's ultra-violet (UV) radiation, inexorably nudged delegates into speeding up the timetable for the phasing out of a number of ozone-depleting substances.
"Unfortunately, I have to report that the situation with respect to ozone depletion is significantly more serious than when you last met in 1990," warned Robert Watson, chief adviser to the Montreal Protocol. During September and October this year, he elaborated, record low ozone layer values were reported over Antarctica and for the first time ever, inhabited areas of southern Chile and Argentina were exposed to the ozone hole and its accompanying high levels of UV radiation. Earlier this year, exceptionally low ozone amounts were measured over northern Europe, Russia and Canada, with northern Europe hitting the bottom with values that were 20 per cent below normal in January.
Ozone depletion is caused primarily by chlorofluorocarbons (CFCs), used over decades as a cooling agent in aerosol propellants, as a solvent and as a foam blowing agent. A number of other chlorine- or bromine-containing substances that harm the ozone layer are also regulated to different degrees by the Montreal Protocol.
Spurred by reports of the accelerated ozone depletion, the Copenhagen meeting agreed to move the CFC phase-out deadline forward from 2000 to January 1, 1996; for carbon tetrachloride to 1996, and for the so-called halon gases, used in fire extinguishers, to 1994. Though the Montreal Protocol gave 52 developing countries -- among them India and China -- a delay of 10 years for their reduction schedules, this was speeded up in Copenhagen to a complete halt in using CFCs by the end of 2005.
"These are substantial achievements," declared Mostafa Tolba, executive director of the UN Environment Programme (UNEP), after agreement was reached on these deadlines. Indian environment and forests minister Kamal Nath, despite pleading it was impossible for a country like India to compress the phase-out schedule further, told reporters he was generally satisfied with the overall results achieved at the meeting.
Funding for transfer of modern non-CFC technology and financial resources became a central claim of the South at Copenhagen. Although the amount of $ 500 million, proposed at the start of the meeting as payment from North to South during 1994-96, is minuscule, financial issues aroused heated debate. The money is supposed to go to the Interim Multilateral Fund established by the Montreal Protocol in 1990, but countries like France, United Kingdom, Italy and the Netherlands, who are delinquent in their 1991 and 1992 assessed payments, were unwilling to pledge further amounts. They and some other Western countries pressed instead for the interim ozone fund to be incorporated into the Global Environmental Facility (GEF), which is operated by the World Bank.

Their attempt drew harsh criticism not only from the South but, surprisingly, also from the United States, whose delegate, William Reilly, commented, "It is disturbing to realise that even today some parties remain unable or unwilling to reaffirm their financial commitment to the fund beyond next year,"
Another delegate, Saradha Thanarajasingan of Malaysia, pointed out, "The fund is a unique experiment, with equal voting rights for North and South. To close down a fund that -- contrary to the GEF -- enjoys the confidence of developing countries and that is now beginning to work well, is meaningless."
The compromise reached on the fund issue was to establish the ozone fund as a permanent institution, but to be reviewed in 1995. Also, financial pledges from the North, made for only one extra year, 1994, amounted to $ 113 million, an increase over the 1993 total of just under $ 100 million.