Brick kiln owners across the country are protesting a ban on mining of brick earth without environmental impact assessment (EIA). On November 22, the All India Brick and Tile Manufacturers’ Federation (AIBTMF) staged a dharna at Jantar Mantar in Delhi, demanding exclusion of soil from the list of minor minerals so that mining it does not require EIA.

The Supreme Court in its ruling in February had made EIA mandatory for mining all minor minerals, including soil, irrespective of the size of the lease area. In April, quashing a petition filed by the brick kiln industry to lift the ban, the Punjab and Haryana High Court upheld the ruling.

Time and again the government has tried to clamp down on the industry for its impact on agricultural land and environment (see ‘Eco-unfriendly’,). But it could never achieve the desired result in the absence of policies to promote alternative cleaner technologies.

Though Bureau of Energy Efficiency (BEE) encourages using eco-friendly construction material like fly ash bricks, its guidelines are voluntary. The ban and the agitation that followed have slowed down the production of bricks at a time when the National Housing Policy projects a heavy demand for bricks.

According to UNDP, India produces about 140 billion bricks a year against its demand for 200 billion bricks. AÃ”Ã‡ÃªS Chamak, president of AIBTMF, says the shortage has doubled the cost of bricks. Coming under pressure, Union environment minister Jayanthi Natarajan has agreed to relax the ban.

Her ministry is planning to shift mining of minor minerals in areas less than five hectares into a category where no EIA will be required. It is time the government also looked at technologies that offer sustainable growth to the industry. Let’s analyse the potential of a few technologies.

Delhi-based KJS Concrete made news in October for installing the biggest fly ash brick plant in the country. The Rs 55-crore plant in Dadri, Uttar Pradesh, can produce 200,000 bricks and 80,000 blocks a day by mixing fly ash with cement, sand and gravel. It procures fly ash from NTPC’s thermal power plant located nearby.

The plant is fully automated and uses state-of-the-art HESS RH 2000 block making machine. A JCB machine carries the raw material to a concrete mixer, which is then cast in moulds of the block-making machine.

The moulds are then exposed to steam so that the fly ash and concrete bind together and harden. The shape and size of the moulds can be altered within minutes. A robotic arm then picks the brick pieces and carries them to storage area. “The only emission is a bit of dust,” says Aloke Dutt, chief manager of the plant.

The brick is about 6 per cent more expensive than the conventional fire clay brick. But it has other advantages. “It reduces plastering cost by 30 per cent and brings down the consumption of cement mortar by 60 per cent,” Dutt adds.

Due to lack of demand, the plant at present produces 2,000 to 3,000 bricks a day. The procurement of fly ash is also a major challenge for the company. Most fly ash released by thermal power plants is used by cement plants as it is mandatory for them to use 16 per cent of fly ash as raw material.

Cement companies also require top quality fly ash. “This leaves very little and inferior quality fly ash for brick makers. We have been asking the government to make arrangement for assured supply of fly ash but to no avail,” Dutt says. 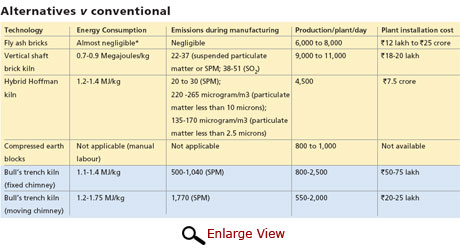 To promote the use of fly ash, the Union environment ministry issued a notification in 1999, restricting the excavation of soil for bricks within 50 km of thermal power plants.

In 2008, the ministry made it compulsory to use fly ash products in construction within 100 km of thermal plants. A report by Delhi non-profit Development Alternatives says the notifications were not properly imposed and hence ash bricks and blocks still account for only a small percentage of the total brick and block share.

China, the largest producer of bricks, has long moved away from fire clay bricks. Among other advanced technologies, the country is reliant on Vertical Shaft Brick Kiln (VSBK) that requires less land and fuel. Though the technology is not new to India, there are only 140 such plants in the Terai region close to the India-Nepal border.

Invented in the 1970s as a rural brick-making enterprise, VSBK essentially consists of one or more rectangular, vertical shafts within the kiln structure. Rectangular arrays of dried raw bricks and coal dust are carefully stacked in the shafts to the top and fire is set to it.

At the bottom of the shaft, batches of baked clay are continuously removed at pre-determined intervals. This technology is energy-efficient as the raw bricks get pre-heated before they get baked. “VSBK relies on the principle of counter current heat exchange to achieve high thermal efficiency.

When the shaft lid is closed, the entire kiln transforms into a chimney, improving the efficiency of VSBK,” says Soumen Maity of Development Alternatives. The technology can be further improved by using carbonaceous fuel like coal dust as an ingredient in the brick, he adds.

This technology saves 30 to 50 per cent of fuel when compared with traditional brick kilns. According to Maity, the cost of VSBK brick is marginally higher than regular clay bricks.

It is said that when India moved to chimney-brick kilns in the 1950s, Europe and North America had started using Hoffman kilns. Patented by German engineer Friedrich Hoffmann, the kiln consists of several small rooms, containing stacks of raw bricks. The rooms are interconnected by a passageway, wherein a fire wagon is placed. It holds a continuously burning fire. Each room is then fired for a specific time, until the bricks are baked. Thereafter the fire wagon is rolled to the next room. The passage allows hot gases to circulate through the rooms, preheating the bricks and saving on fuel use. These kilns lower fuel consumption by 50 per cent than traditional kilns. Only a few such kilns are operating in Uttar Pradesh as it requires a large area.

Compressed earth brick adds a do-it-yourself touch to the idea of making bricks as per one’s requirement. Auroville Earth Institute in Pondicherry has developed an instrument, Aurum 3000 (see ‘Making of compressed earth bricks’), to prepare such bricks, using a mix of sand, soil and cement. It does not involve burning. It rather works on the binding properties of soil and cement.

After pressing the mixture in a mould, raw bricks are kept stacked under a plastic sheet for two days. Then they are sun dried for four weeks, after which the bricks are ready for use. Seven people are required to operate the instrument. It can produce 850 blocks a day. The institute has also developed a fully automated press, Aurum 6000. According to Daniel Estis, secretary of the institute, compressed bricks are not only eco-friendly, but stronger than burnt bricks. It costs just Rs 3 to Rs 4 more than regular clay bricks. “With proper curing, they can last longer than burnt bricks,” says an architect based in Pondicherry. The institute is likely to start production of brick pressers by 2013.

Though brick kiln owners want the ban on soil mining revoked to continue operating furnace-based kilns, they are not opposed to cleaner alternative technologies. “The present ban on brick kilns is arbitrary. It would impact the livelihoods of nine million unskilled workers that the industry employs,” says Chamak of AIBTMF. To achieve the objective, the government must organise the brick-making industry and put necessary policy frameworks in place to promote cleaner alternatives, he adds. Maity suggests that the government can begin this by training unskilled workers in cleaner technologies.