Banking on thrift and credit

Banking on thrift and credit 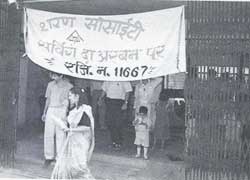 A BANK with no minimum deposits, no signatures, ridiculously low interest rates on loans and run by the depositors themselves: "It is not really a bank, but more of a thrift and credit scheme," says Sushma, a housewife living in Shankar Camp near Moti Bagh in the Capital, one of Delhi's numerous slums where such "banks" operate.

Like Sushma, other women in Delhi's slums and resettlement colonies are also part of their own "banks". Introduced by SHARAN (Society for Helping the Urban Poor), these banks are operating in the slums around Gautam Nagar, Khel Gaon, Mongol Puri and Vasant Vihar.

The keystone of the system is the regular contributions that depositors make. SHARAN helps to open accounts in the name of each of the savings groups with an initial deposit. The group then fixes a day for monthly meetings when they make their deposits and discuss accounts. Loans are given out to the depositors at a rate of 3 per cent and the amount collected every month is put away in a bank. Members have the option of depositing as much as they want, but the minimum is informally kept at Rs 10.

The scheme was started in Gautam Nagar, where Sharan has been working since 1984. The pyramidal management structure of these schemes is almost the same in all the areas. At the base are groups of up to 15 women. In the Shankar Camp settlement, which has about 40 households, there is one main women's group, the Azad Mahila Bachat Sangh. The bigger settlements, like Mongolpuri and Gautam Nagar, have more than one group.

Each of these groups has a secretary and a treasurer and is part of a bigger general body that holds meetings with the staff at SHARAN to discuss accounts and sort out problems. The selection of the officebearers is simple -- anybody who is literate. "We can't go to the formal banks because there we are asked for signatures and deposits," says Mahendridevi, domestic help and treasurer of the Menaka Mahila Bachat Sangh in Gautam Nagar.

The various thrift groups have their own rules for giving out loans. "The moneylender to whom we used to go to charged us 10 per cent interest. But now we have our own credit system, and we charge only 3 per cent interest," explained Sonadevi of Gautam Nagar.
This flexibility comes from the entire community of depositors thrashing out the rules that govern the "bank". "Whenever a loan has to be given, the case is presented at the meeting of depositors," says Santosh. As a general feature, all groups also decide upon the loan amount given to a person, which is usually 3 times the amount deposited by her.

Loans are taken for a variety of reasons, ranging from house repairs, medical expenses and marriage costs to buying televisions and gas stoves. The cooperative banking has not only changed the lifestyles of the participants, but is also providing a safety net in times of need.

With a start made 3 years ago in Gautam Nagar, the scheme has successfully spread to other places. But the going was not always smooth. The women, mostly domestic helps, were initially reluctant to part with their money. "When I proposed the scheme last year at the Shankar Camp, there was a lot of resistance," recounts Sushma. "I had been working with SHARAN for some time, so I knew of this scheme. But people here were scared that the SHARAN people would run off with the money." Sushma went to the extent of keeping her own hut as guarantee for the money collected. "They threatened to sell off my house if things went wrong," she recounts.

Things obviously didn't go wrong, because the Azad Mahila Bachat Sangh has collected around Rs 4,000 since it was started last year. There is also a Bal Bachat Sangh for the children started in April this year. Eleven-year-old Lachhmi, a domestic help in the neighbouring colony, has deposited Rs 10. "I want to keep the money I earn so that I can use it at times of need," she says sagely. Seema, 14 and the secretary of the group, explains, "Some children put their own money and some take it from their parents."

These successes prompted the people in Shankar Camp to form a separate Tamil group, which again is a manifestation of the participatory and transparent nature of the "banks". Says Sushma, "Since neither group understood each other's language, we thought it better to separate them. This way, the Tamil settlers are sure we are not defrauding them."

This pattern operates in Gautam Nagar as well. Here the Tamil population is larger and there are 5 groups. Masilamani, a balloon-seller, says that he puts away Rs 25 every month in his account. Ankamuthu, another balloon-seller, says, "We are all illiterate and don't understand Hindi. So we thought it better to have a separate scheme." He has already taken a loan of Rs 6,000 to buy a cart.

SHARAN has also encouraged the women to plan their savings. "We aim to save a fixed amount every month from what we earn as domestic helps," explains Shankuntala of the Jagriti Mahila Bachat Sangh. "Sometimes we even cut into our household expenses and put the money into the bank," she adds with a smile.

"Our satisfaction is in the fact that now we have a fallback mechanism in case of a financial emergency and it is a system of our own making," says Sharda, a resident of the Shankar Camp, summing up the success of the community as well as SHARAN.