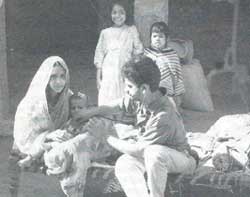 FOR the poor villagers inhabiting the underdeveloped villages of central Bihar, an access to cheap and timely health care is a distant dream. However, for the last 2 years, in many villages of Arrah, Gaya, Patna and Nalanda, 60 young and committed health workers are working hard to transform this dream into a reality.

These youths, mostly matriculates, were trained in basic health care by a Patna-based ngo, Society for Social Health Care (SSHC). It launched a 6-month course in 1993 to train them in the fundamentals of health care. "Given the horrible condition of health service in Bihar, we thought that if China could produce barefoot doctors in 10 days, why couldn't we produce 'First Aid Physicians' in 6 months?" argues R D Singh, chairman, SSHC and retired head, Department of Medicine, Patna Medical College (PMC). The first part of the course, lasting a little over 4 months, makes the trainees theoretically familiar with the basics of human anatomy, physiology and psychology. They are organised in a batch of 25, and taught about various types of diseases, their symptoms and cure. Then starts a 2-month long practical training. They are split into smaller batches and sent to the clinics of the participatory doctors. They are then attached to the PMC for a period of 15 days, to familiarise themselves with more complex modes of treatment like surgery.

Trainees find the course very useful. "It's great that we have learnt a great deal of medical science in only 6 months, when a doctor takes 5 years to be trained," says Ram Lakhan Singh, 25, of village Sabzpur, Jehanabad. These unemployed youths also see a potential to earn a livelihood after the training. Explains Arvind Kumar of the village Naudihakalan in Gaya, "As we don't have any other skill, this training would enable us to make a living as well."

Halfway between a qualified doctor and a quack, Amarendra Kumar Rai, 26, is one such 'doctor' working in his native village, Bagar of Arrah district. This is linked to Arrah town by a dilapidated road, populated by a thousand households. Laid out in narrow lanes overflowing with filth, it has a non-fuctioning primary health sub-centre. Here, a scruffy looking Rai dressed in a shabby 3-piece suit and holding a doctor's bag, visits every house to provide cheap and functional health care.

Says Aditya Narayan Srivastava, 27, "Rai is a great asset to the village because the government doctor is never available." Srivastava has much reason to praise him. Last October, when he was suffering from jaundice, Rai treated him for a mere Rs 50, and he recovered within 15 days.

While Rai treats common diseases like diarrhoea, fever, jaundice and malaria, he also refers the complex cases to the nearby hospitals. Many patients who would have landed in hospitals with chronic diseases, stage a speedy recovery because of timely treatment. Mahendra Rai, 25, of Bagar sustained serious injuries when he fell from a tree last November. With some first aid, medicines and injections, he recovered before his injuries could take a complicated turn. On the other hand, Panpato Kumar of the same village had to be refered to the pmc because of a chronic and complicated kidney trouble.

In the villages, the women and children are primary victims of diseases. Because of ignorance and callousness, they usually delay consulting a doctor. Recognising this problem, Rai has started an immunisation programme of his own. Carrying polio and dpt vaccines in an ice-filled thermos flask from Arrah, he has immunised over 50 childern.

The women patients of the village are now relieved to have a doctor to consult. Vimala Devi, 34, suffers from leukorrhoea (excessive white discharge). But she would never visit a doctor until Rai started practising there. By the time Rai began to treat her 3 months ago, the disease had become chronic. Now she has recovered considerably.

It is not that this health care system is an ideal one. Its main emphasis seems to be only on the curative aspects. Preventive measures have largely been ignored, although Rai asserts, "Half the diseases are because of polluted water. If proper preventive measures are adopted, they can be avoided." Dhirendra Rai, 24, who had jaundice last year, is ignorant about the factors that cause it. There is little awareness among the villagers about keeping the surroundings clean or about using clean water. Not surprisingly, in the last year, Rai had to treat about 60 cases of diarrhoea--the most common disease in the village.

Neither have the villagers incorporated traditional medicines for treating diseases. Vinod Kumar Ojha, 28, who runs a small dispensary in village Phulari of Bhojpur district, blames the villagers: "We often tell them to follow home remedies before trying allopathic medicines. But they prefer a ready-made remedy." Villagers, however, contradict him. Says Geeta Ojha, 27, the mother of a 2-year old child struck with pneumonia, "I massage him with warm mustard oil by mixing garlic and dhatura (Dhatura sp) seeds in it, even though the 'doctor saab' never recommended it."

The villagers have strong faith in the 'first aid physicians', as they are locals themselves. Says Chamela Devi, 60, of Phulari who was cured of stomach troubles, "Vinod is like our son; and when we had faith in witch doctors why shouldn't we have faith in him, since he is really a doctor?" Perhaps this faith makes Vinod a little careless too. He doesn't sterilise the syringe properly while administering injections to his patients, and washes it only with cold water. This could take a dangerous toll of his patients.

While these 'doctors' provide much needed health care service in these villages, they are not able to perform the role of all-round health workers. Villagers visit them only when they fall sick, and preventive health care remains unknown.

However, these doctors are aware of a larger role they could play in the villages where no other form of health care as yet exists. As most of them have started working fairly recently, they look forward to fulfilling this role by acquiring more experience.