Energy security will not come with more drilling. The faster we realise this, the better 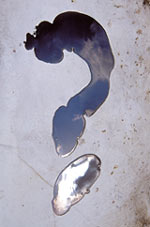 "One of the ironies at the turn of the century is that, in an age when the pace of technological change is almost overwhelming, the world will remain dependent, out to the year 2020 at least, essentially on the same sources of energy - oil, natural gas, coal - that prevailed in the twentieth century."
- The Geopolitics of Energy into the 21st Century, Centre for Strategic and International Studies, February 15, 2001

At some stage the world will have to turn away from oil. Either there would be none of it left or it would become forbiddingly expensive. And then? Or let's assume that there will be plenty of oil for all times to come. There has to be a limit to the amount of carbon emissions the Earth's atmosphere can take without reacting to abuse. What after we hit that point?

Most governments are not bothered; that much is clear. They are interested only in securing maximum supplies of fossil fuels, in controlling oil reserves and garnering political support from these sops. In September 2000, the price of a barrel of oil touched a 10-year high of US $35. Large parts of Europe were immobilised, leading to street blockades and protesters demanding total exemption from fuel taxes that account for more than half the price of petrol in Europe. France was the first to succumb - it cut taxes to the tune of US $400 million. Italy and Belgium also conceded a little. But the British prime minister Tony Blair put his foot down, arguing that high oil prices were good for combating global warming. Other European governments also decided to not cut fuel taxes, citing political and environmental reasons.

Taxpayers' money is used in many parts of the world to subsidise the price of fossil fuels, keeping them artificially low. This ignores the non-renewable nature of the fuels, or the cost of their adverse effects on health and environment. More disturbing is the fact that this makes renewable energy options uncompetitive - undermining any possibility of a transition to cleaner energy options like solar and wind power or fuel cells. The prices of these technologies have come down in recent times and they need critical support at this stage. The way to do that is to cut subsidies and levy taxes on fossil fuels. Fuel taxes were adopted in Europe after the oil shock of 1973, when they were seen as necessary to improve efficiency. Well, the imperative for the same is greater today: cutting carbon emissions to mitigate global warming and air pollution.

While the European trend on fuel and carbon taxation is by no means perfect - European governments apart from the UK are yet find a way to hold industry accountable through energy taxation - it is much better than what the US has to offer: an attack on Iraq and an unwillingness to compromise on the American way of life. Expansion of nuclear power is definitely not worth the 'high-level' waste it would generate. Nuclear energy is not clean till a way is found to deal with nuclear waste. The Kyoto Protocol cannot be used to promote nuclear energy.

In India, nuclear energy is making a comeback despite a long history of failed promises. The country's government-run nuclear energy sector's performance is best summarised in a statement of Homi Bhabha, the founder of India's nuclear power programme: "No power is costlier than no power." The effort to get foreign capital into the nuclear energy sector is very unrealistic at the moment due to India's stance on the NPT. Moreover, insurance cover for nuclear plants is too expensive a proposition in the Indian energy market. As for the government's investment in fast breeder technology, even its proponents acknowledge that it is not likely to bear any fruits for the next two decades. It is a long-term investment, they say. It is surprising how the government is so keen on investing in a technology with disputable credentials, but is unwilling to pursue renewable technologies with the same level of commitment. To ensure security of oil supply at reasonable prices, India is getting into such awe-inspiring areas as Sudan and Myanmar. In determining its energy policy, India is actually following the US example.

When politicians believe that the voting patterns are determined by the price at which petrol - or should we say gasoline - is sold for gas-guzzling sports-utility vehicles, one cannot talk of terms like efficiency in energy use and demand side management. Two days before the US secretary of state Colin Powell was to address the UN summit on sustainable development in August in Johannesburg, negotiators from the US and OPEC blocked proposals by the European Union and Brazil that would have required the world to obtain a set percentage of its energy from renewable sources by 2010.

The nexus of governments and oil cartels is too strong for those making feeble noises about renewable energy. As exporters and importers of oil consolidate their polluting business, the environmental ground seems more slippery than ever before. When negotiators to the eight Conference of Parties to the UN climate convention arrive in Delhi in November, they better have their ears close to the ground (or should we say the oil fields!). The world's oil reserves are unequally distributed. But the Earth's atmosphere is shared by all.