Bias is in the law

Bias is in the law 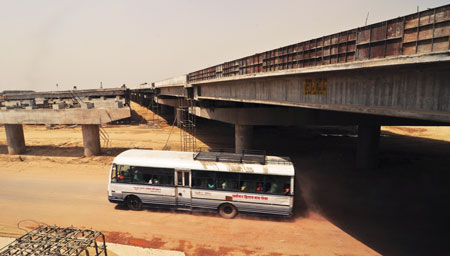 The violence in Bhatta-Parsaul villages is a reminder of smaller clashes in western Uttar Pradesh since 2007 over land acquisition. In August 2010, Tappal block in Aligarh saw similar protests, leading to a clash between farmers and the police. The compensation given to these farmers against land acquired for the Yamuna Expressway and a high-tech city was a fraction of the profits made by the private developer to whom the land was transferred. To placate the agitating farmers, the Uttar Pradesh government announced a new land acquisition and rehabilitation policy on September 3, 2010. It also promised to stop the construction of the township.

The policy offered sops to the farmers in addition to land compensation. These included equity shares in the development projects and an annuity of Rs 20,000 per acre (0.4 hectare), which would be increased by Rs 600 a year, for 33 years; alternatively farmers were offered a one-time compensation of Rs 2.4 lakh per acre. One person in each family would be entitled to employment with wages totalling Rs 1.85 lakh over a period of five years, the policy said.

The state cabinet secretary said no land would be acquired from farmers without their consent and that the price of land under acquisition would be finalised through a negotiated settlement with the owner. It was touted as the “best land acquisition policy, which beats that of any other state”. But the policy has not seen the light of the day.

“It can become the law only after the Centre passes the draft bill,” says Bhure Lal, retired Uttar Pradesh cadre bureaucrat who served in the tribal affairs ministry and the prime minister’s office.

Farmers in Tappal and the twin villages of Bhatta-Parsaul complain the government is buying land from them at less than a third the prevalent rate and selling it at high profits to private firms.

But the Uttar Pradesh government says it is offering farmers better land rates than the Centre. A statement released by the state soon after the violence in Bhatta-Parsaul, said it pays farmers Rs 44 lakh per acre in Noida, Rs 36 lakh per acre in Greater Noida and Rs 22-35 lakh along the Yamuna Expressway. On the other hand, the railway ministry is offering only Rs 2.9-Rs 4.35 lakh per acre for land for its coach factory in Raebareli; the National Highway Authority of India paid Rs 9.6-Rs 22 lakh per acre for broadening the National Highway 11 in Agra. Real estate agents say the price difference reflects the market rate; there is little demand for land in Raebareli while land values in Noida and Greater Noida are much higher.

Farmers who lost land to the Yamuna Expressway say they want better compensation. They say the land the government bought from them for less than Rs 800 per sq metre in Greater Noida was sold to private developers at 10 times the rate they got. Under the existing laws, private parties cannot buy agricultural land directly from farmers for non-agricultural purposes. The state government has to notify its land use change. This change is what leads to escalation of land prices.

“The increase in price of land, just on the basis of land use change, is the crux of the dissatisfaction among farmers,” says Bhure Lal. He adds that fixing of circle land rates to be paid to farmers has always been contentious because it is based on the previous three registrations of land sale with the tehsildar at the time land is acquired. This rate may not reflect the prevalent land rate.

After all round condemnation by political parties over the way the Uttar Pradesh government handled the agitation in Greater Noida, the state was quick to shift the blame on the Centre for failing to convert the Resettlement and Rehabilitation (R&R) policy into a law. On May 12, Union home minister P Chidambaram promised to introduce amendments to the Land Acquisition Act of 1894 and a draft R&R bill in the next session of Parliament. The twin bills could not be cleared in Parliament on two previous occasions—in 2007 and 2009—due to lack of consensus.

The Land Acquisition Act of 1894 is the basis for acquiring land across India; the R&R policy of 2003 is a statement of intent which some states have adopted. Anita Choudhary, secretary of the department of land resources in the Union rural development ministry, says the government is working on amendments to the Act and the R&R bill.

Deputy secretary in Choudhary’s department, Harpratap Singh, says till date, future value of land was not taken into account at the time of fixing the rate of purchase from the farmers, but now the ministry will try to consider it. Another proposed amendment will take into account the acceleration of land prices between the time of notification and the acquisition. Section 6 of the Act stipulates that the price of land for acquisition be fixed at the price prevalent at the time of notification. Now, the price may be calculated after notification “to give farmers better compensation”, says Singh.

Civil society groups object to retention of certain clauses in the amendments and R&R drafts (see www.downtoearth.org.in for drafts and their critique). One of these is the “urgency” clause contained in Section 17 (1) of the Act which allows the government to acquire land without going through the procedures described in the Land Acquisition Act, which provides that people whose land is acquired should be heard. Under the provision, the government can acquire land within 15 days of notice. “Urgency has neither been defined nor illustrated in the Act. The provision effectively sanctions the bypassing of procedural mechanisms in the Act and goes against democratic rights and Constitutional principles,” says Madhuresh Kumar of the National Alliance of People’s Movements, a network of non-profits. Activists say 17 (1) is the most misused section. A recent Supreme Court order, in fact, pulled up the Uttar Pradesh government for invoking the section for acquiring 205 hectares in Greater Noida and scrapped the acquisition (see ‘Property is a right: SC’, Down To Earth, May 15-31, 2011). The court also questioned the Greater Noida Industrial Development Authority for invoking the section to acquire land for the expressway project.

Activists are also opposing the clauses “eminent domain” and “public purpose” in the Act. Eminent domain refers to the powers of the state over all property within the state, and specifically the power to take over private property for a public purpose. It makes the government the sole arbiter of what constitutes public purpose. The Land Acquisition Act amendments define public purpose as provision of land for works vital to national security; for infrastructure projects which benefit the general public; or for other purpose useful to the public for which 70 per cent of the land has been bought by a person (or company) and remaining 30 per cent needs to be acquired. In recent years, the government has increasingly used this clause to benefit private corporations, says Kasturi Kannan, independent researcher and writer.

The proposed amendments in the Land Acquisition Act make acquiring land for private interests easier and more difficult to challenge. Vijayan M J of non-profit Delhi Forum says there is hardly any difference in the 2007 and 2009 draft bills despite the civil society group making over 50 representations to Parliament’s standing committee on rural development, which was supervising the bills after the 2007 drafts were rejected in Parliament. He says the ministry did not incorporate any of the suggestions and changes. “All arbitrary benchmarks used in the 2007 drafts are replicated in the 2009 drafts as well. For instance, the provision that the need for rehabilitation would arise only if more than 400 people are displaced in the plains and more than 200 people in the tribal hilly areas remains unchanged in the second set of drafts,” says Vijayan. Delhi Forum had suggested that all families displaced should be rehabilitated. He adds that the proposed amendments completely neglect landless farmers.

What is happening in Greater Noida was witnessed in the case of the Bengaluru-Mysore expressway which connects the two cities of Karnataka. Of the total land acquired for the project, only one-third was required for the expressway. The rest was sold to private developers. Kannan says initially when land was acquired for public purpose it meant roads, railways and infrastructure. Now it includes private companies as well.

As for the R&R bill, it is just a copy of the 2003 policy, says advocate Usha Ramanathan, research fellow at the Centre for the Study of Developing Societies, a think tank in Delhi. The bill has many ambiguities. For instance, it says land will be provided to the displaced if available, which means there is no guarantee. Ramanathan says the existing policy cannot be enforced because it is not the law; even states like Uttar Pradesh, Punjab and Haryana that have adopted the policy have not made it a law (see ‘Punjab resettlement policy slightly better’,).

Uttar Pradesh has not enacted a law on R&R; announcements made by the state government from time to time form its basis. These announcements are impromptu reactions to protests by those whose land is being acquired. Arundhati Dhuru of Asha-Parivar, a Lucknow-based NGO, says the state policy is hardly a little more than a piece of paper. “Since its announcement, none of the packages it proposes has been accepted by the farmers. The state has not even discussed it in the Assembly.”

In their present form, the land acquisition amendments and the R&R bill may not get farmers a fair deal.