Biosafety issues get a push

Biosafety issues get a push 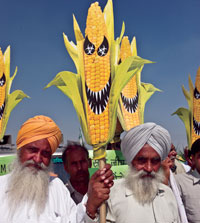 In the jargon of global conferences on climate change and biodiversity, acronyms familiar to the regulars but puzzling to the outsider need some explanation. In the just-concluded Conference of Parties (CoP) to the Convention on Biological Diversity (CBD), there was very little coverage of the sixth CoP serving as the Meeting of the Parties, or MoP-6 for short, which preceded the main event or CoP-11.

Participation because of the specialised nature of the issues is lower than at the main event on biodiversity conservation—it was around 1,500—and purveying this to the layperson is not easy for the media. Inside the venue at the Hyderabad International Convention Centre, however, it was another story with a high frisson of excitement marked by a series of riveting but conflicting side events.

If industry had its high-power campaign to show genetically modified organisms (GMOs) in agriculture, scientists and activists opposed to GM technology had many more events to demonstrate that it is hazardous and needs to be kept under strict controls if not banned altogether.

Presentations by an array of independent scientists from across the globe put together by the European Network of Scientists for Social and Environmental Responsibility (ENSSER) revealed how resistance to GM technologies was developing across the world—from South Africa to the US and India. The agribiotech industry on the other hand was pushing it as the poor farmer’s best friend. All this was intended to influence the negotiations in the plenary sessions of MoP-6 which was held from October 1 to 5.

MoPs are devoted to the Cartagena Protocol on Biosafety, an agreement under CBD and the only international treaty that regulates GMOs, or living modified organisms (LMOs) as they are known under the protocol. India is one of the 163 parties to the protocol.

In spite of the difficult nature of the negotiations, several key measures were adopted at MoP-6, the most significant being the agreement to advance discussions on socio-economic issues associated with LMOs. This resulted in the setting up of an Ad Hoc Technical Expert Group (AHTEG) to develop conceptual clarity on the issue, a signal victory since it was thwarted at MoP-5 in Nagoya. The AHTEG report, which will be submitted to MoP-7 in 2014, is expected to help Parties to the Cartagena Protocol to decide upon development of guidance on socio-economic considerations.

Socio-economic considerations have been controversial since developed nations oppose them as unnecessary. Article 26 of the Cartagena Protocol establishes the right of Parties to take into account socio-economic considerations resulting from the impact of LMOs on the conservation and sustainable use of biodiversity. This has special significance in relation to the value of biodiversity to indigenous and local communities and is a factor to be taken into account when deciding to import these organisms. India did not do a socio-economic study when it decided to allow the commercialisation of GM cotton in the country a decade ago.

MoP-6 also reached agreement on other complex issues such as risk assessment and action to be taken in the event of unintentional movement of LMOs across national borders and the kind of documentation that should accompany shipments of LMOs. Transboundary movement of LMOs is cause of concern because few governments are equipped to monitor their movement (see https://www.downtoearth.org.in/content/taking-stock-biodiversity). There was progress on the development of “Guidance on Risk Assessment of LMOs” by a group of experts and Parties have been encouraged to test the guidance in actual cases of risk assessment and share their experiences.

The delegates also agreed on an improved plan on capacity-building to deal with the complexities of the Protocol and adopted further steps to strengthen the Biosafety Clearing House, an online information exchange facility. MoP-6 was a rare instance where all sides cheered the outcome.