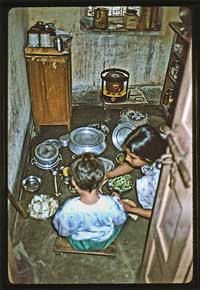 Many of my favourite childhood memories have to do with the time I spent with my grandmother in her kitchen, the ranna ghor. Ma usually was the first to wake up.

I loved huddling up with her while she crushed spices on a pentagonal slab of stone—the sil —with a nora, a black oblong pestle. Ma was otherwise a reserved person, but the rhythms of grinding did something to her. She would often break into a song, and sometimes narrate a story.


One of her favourite stories was about the sil and nora, a hand-me-down from her mother-in-law. The stones were my great grandfather’s first buy for his wife—my grandmother would note with a chuckle that her mother-in-law would have preferred a sari or perhaps earrings.

Ma gave up on the stones once. That was when my parents bought a mixer grinder. But she recoiled at the machine’s first performance. The spices had been ground to dust and there was no way they could be worth any flavour. The grinder was packed away, to be used on rare occasions when my mother managed to oust Ma from her domain.

Ma was not always a stickler for culinary tradition.

Knives and peelers had their place in her kitchen, but it was the bonti she was most comfortable with. A carved iron blade fitted on a wooden stand, which Ma would hold in place with her feet, the bonti was sharp enough to cut off the head of the toughest carp and safe enough to peel vegetables. I would usually bid her goodbye for school while she was at work with the bonti. The cricket score—and not Ma’s kitchen—would be on my mind when I would see her frail figure approaching, umbrella in hand, from my school bus window. Ma had her way of weaning me away from my favourite sport. She was a great raconteur and many of her stories were about her late husband— tomar dadu (your grandfather) as she would address him to me. Grandfather, by Ma’s accounts, was a frugal eater. But he used to be upset if a generous spread was not there on the dining table.

I had mixed feelings about these stories. Much as I prided on an ancestry of food connoisseurs, I knew the accounts of grandfather’s dictums about the perfect spread would be followed by Ma dishing out neembegun —brinjals sauted with a little salt and mixed with tender neem leaves fried to papery crispness. She would ladle the mixture on a plate of rice with a little sermon on the benefits of neem. Her theories notwithstanding, I saw the feathery neem leaves as another example of adults exercising unfair power over children. But protests were of little use and I made peace with the bitters. I must confess that, gradually, I came to appreciate the subtle sweetness of the brinjals counterposed with the bitterness of the neem leaves and neembegun went on to become quite an addictive starter.

I did not, however, baulk at all the bitters. On hot summer days, a pot of yellow moong dal acquired a refreshing twist with the addition of karola —bitter gourd—green chillies and ginger. Sometimes, young specimens of the bitter vegetable were steamed, mashed with a little salt and pungent mustard oil and eaten with plain rice. And on Sundays and holidays, I looked forward to the shukto.

On these days, Ma would begin work a little earlier than usual and after finishing the usual cooking, she would go about chopping the bitter gourd into inch-long pieces, cubing pumpkins and slicing radish. The vegetables were stir-fried and very soon our house would be filled with the aroma of panchphoron —a mixture of mustard seeds, black cumin, cumin, fenugreek and fennel seeds. It was indication that my favourite dish was almost done. The shukto was the last to be cooked, for it must be served piping hot. The lightly cooked vegetables, Ma said, prepared the system for a heavy meal.

Years later, as a student of history I found evidence of Ma’s belief in the benefits of bitter vegetables. The food writer Chitrita Banerji notes that a 11th century collection of proverbs recommends eating bitter gourd during the Bengali month of Chaitra (mid-March to mid-April) when the sun is at its unforgiving worst.

With Ma’s passing away, shukto became infrequent at our eating table. But only till my mother retired as a librarian in 2003: arranging meals has taken the place of cataloguing books and journals. While she usually directs the cooking, making the shukto is her preserve. Waving away our pleas to stop taxing her legs strained by varicose veins she sets about the shukto with the same diligence as Ma using the sil-nora to grind the spices. 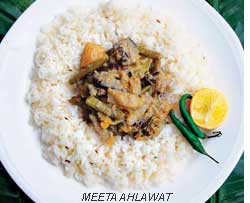 My sister and I are often at the receiving end of her jibes for using cutlery. Food has to be appreciated first with the fingers and then with taste buds. Ma too would have insisted on our using fingers to mix rice with chachchari —a medley of brinjals, pumpkins and radish cooked in mustard that followed the bitters. Chachchari was sometimes substituted by a hash, usually of bottle gourd— lau ghonto. The bottle gourd is a family favourite. But it could be any vegetable.

Then came the machher jhol or the fish curry, sometimes mutton. Fresh fish pieces were fried with salt and turmeric and then cooked into a gravy dish. The meal would conclude with us slurping chutneys—green mango in mustard-flavoured syrup or a tomato and date concoction. Ma would sometimes relax her strictures against cutlery for the sweet dish.

My mother is not as fastidious about eating food in courses as her mother-in-law. But sometimes she recollects what Ma would say: bitters prepare the palate for a meal, the vegetables soothe the taste buds before you could satisfy your craving for fish and meat. And after a heavy meal the chutney cleanses the palate. You could then savour the sweet.
Features West Bengal Traditional Knowledge Traditional Knowledge Nutrition Nutrition Health Science & Technology Fossils Life Science Climate Change Climate Science Global Warming Climate Impacts Insects Crustaceans Crustaceans North Atlantic Ocean Planets NASA Physical Science Sanitation Sewage Treatment Techn Science & Technology
Donate Now