The prohibitive costs and some expert suggestions to bring them down 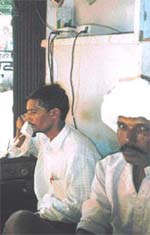 Do we have the technological wherewithal to connect villages right across India? How much will these technologies cost? Can we afford them? The most daunting challenges can be summarised in three categories.


"There are barely 29 million telephones in India. Telecom infrastructure in small towns and villages hardly exists. Even in urban areas, each telephone connection costs more than Rs 30,000. To break even, an operator needs to earn at least Rs 9,000 per year. Not more than 3-4 per cent of the urban population can afford this," says Ashok Jhunjhunwala, head of electrical engineering at the Indian Institute of Technology, Chennai. Telephones in villages are far more costly -- per line cost is often quoted at Rs 70,000-80,000. To break even, the annual revenue per line has to be about Rs 20,000. This is just not affordable, says Jhunjhunwala.

Internet in urban areas costs about Rs 25 per hour just for access. The cost can be astronomical in villages. One hour of internet can cost Rs 1,200 just for access in a village or a small town near Trichy in Tamil Nadu if the internet service provider is in Chennai. Even if the service provider is in Trichy town, the hourly cost from a distant village could be Rs 150, Jhunjhunwala calculates. If we wish to add 100 million telephone lines over the next seven to eight years, it would take an investment of Rs 2,00,000 crore (if the cost per connection is estimated at Rs 20,000). This is just not possible, Jhunjhunwala indicates. Unless cost-effective solutions are developed small towns and rural areas would remain neglected (see box: Line it up).

For nearly a century, telephone connections have depended on pairs of copper cables. Rising costs have made the copper-wired local loops expensive. If subscribers are spread out, as is the case in rural areas, each user requires separate access loops from the exchange, sending the costs through the roof. Jhunjhunwala says wired systems are not the solution for rural areas (see p34: Wireless for villages).

Poor supply is a major hindrance. "Even if villages have power connections, supply is so irregular that computers cannot run," says Mahesh Uppal, telecom adviser to the New Delhi office of the Canadian International Development Agency. India's power generation and transmission record is so poor that it cannot be expected to meet the demand of taking it to villages. Power backup using batteries is only a temporary solution. Can renewable energy meet the challenge?

"Solar power is a good solution, but relatively costly at the moment," says Subbiah Arunachalam, informatics director with the M S Swaminathan Research Foundation in Chennai. The foundation is running a project of computerisation in Pondicherry villages. "At Villianur, our hub centre in Pondicherry, we use a combination of mainline electricity, battery pack and solar power. The circuit senses the load at any given time and automatically draws power from one of the three sources," says Arunachalam. "Telephony can easily be provided with solar power. But internet is a different proposition," says Jhunjhunwala.

The only long-term solution is decentralised power generation, possibly using renewables. In the hilly regions, the answer could be microhydel (see 'Power the people', Down To Earth, November 30, 2000). Areas with good wind energy potential can resort to that (see 'Gone with the wind', Down To Earth, June 30, 1999). Fuel cells hold a lot of promise and there is already talk of the future of the hydrogen economy (see '2H2 + O2 = 2H2O + energy', Down To Earth, July 31, 2000). The key lies in coming up with technological solutions that facilitate local electricity generation, rather than depending on centralised systems.


Computers and internet are completely useless in villages if their content is in English. Even if software is available in India languages, the poor literacy levels will ensure that a vast majority remains out of reach. Is it only for the urban elite? Not really. "The language problem can be solved quickly as one starts installing computers in the rural areas," says Jhunjhunwala. "Technology can overcome the barriers of literacy and language. Multimedia and multilingual software can provide the solutions," says Anil K Gupta, professor at the Centre for Management in Agriculture of the Indian Institute of Management, Ahmedabad. Even the illiterate can be involved through the visually rich multimedia applications. "More than a third of the people in the community we work with are illiterate. We use multimedia tools. Language is no longer a problem and solutions are inexpensive," observes Arunachalam. "All our computers are Tamil compatible. Many of our databases -- insurance information, animal rearing -- are in Tamil," he says about the Pondicherry project.

Several efforts are on to develop software in Indian languages. "India has the status of a world leader in the development of software-based language translation which finds application in pagers and computers for non-English speaking users," says R A Mashelkar, director-general of the Council of Scientific and Industrial Research.