Builder of bridges across troubled waters

Builder of bridges across troubled waters 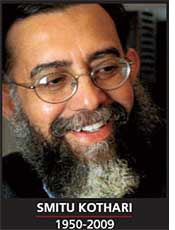 Smitu will continue to be with us through his works. With fertile imagination, relentlessly learning to weave together the personal, the political and the social, he inspired students, activists and professionals. He loved music, read and wrote to persuade people to see beyond the confines of biographies, and resisted injustice, wherever possible. A million memories of a dear friend come to mind. Often he would point out that activism and reflective thought need to go hand in hand with the heart. "It is important to trust the innate goodness of all human beings. Give love and everyone would contribute to the making of a just world," he would say.

He coordinated research to bring to light creative grassroots initiatives in diverse fields--medicine, social forestry, biodiversity, health, agriculture, inter-cultural mutuality. He was part of several such initiatives. For instance, he was a founder member of the Timbuktoo Collective, a non-profit endeavour in Andhra Pradesh, where nature healed itself and an entire ecosystem was recovered.

There were many occasions when Smitu would share the inspiration that comes from being witness to nature healing. These, he would point out, demonstrate the way resistance and life processes are interwoven, both concerned with a celebration of plural possibilities. Resistance was not to obstruct development; on the contrary it clears the ground for justice. It is an affirmation of possibilities inherent in nature healing itself.

On this and several other subjects Smitu was clear we need to learn from the lives of indigenous people across the world. All of this learning, he felt, could go into the making of an Indigenous encyclopaedia. For him learning was not confined to the walled classroom but in places where life processes work out.

Parliamentary democracy needs to be questioned. How can a small minority in Parliament represent a culturally diverse one billion? There are civilization processes beyond the reach of this system of governance. Smitu positioned his life and work within these non-party processes. He was one of the earliest advocates of Pakistan-India peace.

An important turning point in his journey was the Lokayan initiative. He saw the World Social Forum as an avenue to affirm the possibilities against neo-liberal, WTO-sponsored globalization. A third turning point was the formation of Inter-Cultural Resources. He said fresh thinking was needed on what these institutions will look like. Inter-institutional relations become important both in the context of a centralizing economy and in the context of the exploding ecological crisis which is impoverishing millions and which increasingly spans political borders. Deforestation in Nepal causes floods in India or fossil fuel consumption in the industrialized world causes floods and displaces thousands in Bangladesh.

Smitu felt the challenge could be met by engaging communities in a process of delegitimizing the culture of consumerism. He said we must link the democratic "locals" into a system of mutual accountability further linked to similar efforts in the North that are contesting corporate power, social inequality and violence and practise humane people-centered development.