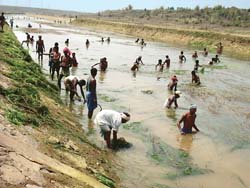 A canal, which ordinarily takes about 10 days for the irrigation department to clean, was cleaned in two days--April 1 and 2--in Orissa. What made the difference was the involvement of a water-users' association (wua), the lowest tier of the legislatively mandated pani panchayat system in the state (see box: Only on paper)

Pani panchayat executive committee members had complained to the collector of Sambalpur district of weed problems in the Sason main canal, part of the Hirakud irrigation system, after an informal meeting convened by the panchayats on February 25, 2007. No action was taken even after the pani panchayat members raised the issue at another meeting, with the collector present. When the irrigation department was approached, it said it needed to close the canal for seven days, which was not acceptable. "We could not have afforded a seven-day closure.The dalua (summer paddy crop) was already in an advanced stage. Any disruption in water supply could have resulted in huge crop failure," said Dolagovind Nayak, president of Unit 1 pani panchayat of the Parmanpur distributary committee. "It takes about three days after opening of the canal for water to reach the fields. So, water supply to our fields would have stopped for at least 10 days," added Aditya Panda, president of the Themra pani panchayat. Pani panchayat members finally forced the collector to allow them to clean the canal. Though maintaining it was not their responsibility, the collector had to accede.

"We cleaned Sindurpank distributary canal in just a day, in 1996, by involving thousands," said Chandrasekhar Panda, president of another panchayat. This time the scale was bigger. It took 3,000 people two days to clean the canal. "Previously, canal cleaning was carried out departmentally or through contractors, who were not cleaning properly. In most years, the irrigation department could not complete the cleaning. See the difference," said Ashwini Mohapatra of Jyotivihar pani panchayat. The enthusiasm was justifiable. Nowhere in Orissa had pani panchayats shown such unity.

There was a history to it. "We have been fighting for just causes for more than a decade, first to ensure minimum support price for paddy then against corruption in the renovation of the Sason canal system under the World Bank-assisted Orissa Water Resources Consolidation Project (owrcp) and now against water supply from the Hirakud reservoir to the mushrooming steel, aluminium and thermal units. The formation of pani panchayats has added more solidity to farmers' organisations," says Ashok Pradhan, president, Sambalpur Zilla Krushak Suraksha Sangathan (szkss), a collective of 33 organisations.

But the Sason incident also raised key questions about the functioning of the pani panchayats, set up under the Orissa Pani Panchayat Act, 2002, and the state's role. A panchayat member summed up the problem. "The irony is that we had to make a demand to do a job which should ideally have been decided and carried out by us," said M Govindu, president of the Sambalpur distributary committee. Farmers said their involvement made for better management of irrigation systems. "But that's where the government failed us. We've been given no scope for participation since pani panchayats were formed four years ago," complained Murari Prasad Purohit, president, No.10 pani panchayat of the Sambalpur distributary.

"The collector too is probably unaware of such committees or he may have been fooling us," said Bibhu Pattanaik, president of the Sason Distributary Committee, who is not aware of the structure beyond distributary committees. There are more areas of confusion. In Sason, they formed an unofficial five-member committee. "The collector asked us to form a small committee for close interaction between pani panchayats and the administration," said Pattanaik. "But even after we formed it, the collector has twice asked us to form small committees. We failed to understand him," said Govindu. "Can there be a smaller committee for a project as big as Hirakud?"Actually they were not required to form a small committee. Under the provisions of the Act there should be an executive committee for every distributary committee, not exceeding nine members. Similarly, the general body of the project committee should elect an executive committee of nine or less. The state committee is supposed to consist of "such numbers of Presidents of the Project Committees as may be considered necessary, but not exceeding ten".


Despite these grey areas, the government claims the Orissa model is the most successful. Dipak K Das of the Water and Land Management Institute (walmi), Aurangabad, says the Orissa model is an "in-between process", better than the "big bang top-to-down approach of pani panchayat formation in states like Andhra Pradesh and Madhya Pradesh" and the "bottom-up approach adopted by Maharashtra and Gujarat". "In the implementation of participatory irrigation management for a certain period, a bottom-up approach with motivational strategy was adopted. Later on, when the movement attained a certain momentum, the state adopted a somewhat top-down strategy by enacting the Orissa Pani Panchayat Act, 2002," says Das.

walmi had been pursuing a participatory approach in Orissa since the 1980s, first through the usaid-assisted Water Resources Management and Training Project, which failed Later, pani panchayats were pushed as the most important item on the policy agenda under the World Bank-sponsored Orissa Water Resources Consolidation Project, through limited legislation. When this did not work, the government gave legal recognition to the panchayats. walmi is at the forefront of implementing this initiative. Other agencies, too, were earlier involved. The European Commission had initiated pani panchayats in 56 minor irrigation projects, 20 of them have been handed over full responsibility and exempted from water taxes. wuas were also central to the Asian Development Bank-assisted Orissa Integrated Irrigated Agriculture and Water Management Project and projects supported by the uk's Department for International Development. The Orissa Water Policy, 2007, too supports wuas.

Das's claims were, however, contested. Farmers have a long list of complaints. "We are not informed of the time and quantity of water that is being released into the canal," said Panda. "That's why we are hardening our stance against the government," added Pattanaik. The pani panchayats have started a movement against the government, with a four-point agenda: power transfer to panchayats; consultation while deciding on water allocation from the Hirakud reservoir and other irrigation sources; no contract farming; and respect for pani panchayats. Pani panchayat members were enraged that the chief engineer of the Mahanadi Basin did not even offer a chair to distributary committee presidents when they had gone to invite him to a meeting. Instead he questioned the authority of pani panchayats to discuss issues with him.


Pani panchayats in Orissa drew mixed lessons from Sason. "We don't think the government will recognise such efforts, since officials consider us as threats to their corrupt practices," said Govindu. "When I became president of our pani panchayat in 2004, I was asked to sign bills by the departmental engineer. I found there were bills for painting gates though our canal did not have any," said Shyam Sundar Pradhan, secretary of VSS panchayat, Parmanpur. "The officials warned they would stop grants to our pani panchayat. In fact, we are yet to receive any." "We will harden further," were Govindu's final, ominous words.