In the past, nothing went to waste in a homestead, including the liquid left after churning out butter from curd 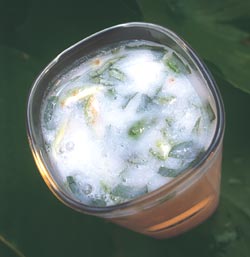 in the past, nothing went to waste in a homestead, including the liquid left after churning out butter from curd. Combined with natural airborne bacteria, this liquid when thickened becomes a pleasingly tangy drink. And all over the world it is lovingly called buttermilk -- milk that provides butter. Irish folklore claim a glass of buttermilk can cure a hangover within a short span of time, and when heated with a clove of garlic, it is bound to cure any number of ailments. According to American folklore, drinking buttermilk immunises one against poison oak and ivy. Women also used it as a facial wash, believing the flecks of butter make the complexion smooth and creamy.

According to traditional Indian wisdom, one big glass of the creamy, tangy drink can fuel oneself through a day of hectic work. Before massive urbanisation and the arrival of aerated cold drinks in India, buttermilk used to be a favourite item served both as a speciality and as an adjunct to daily meals. Many Vedic hymns give its reference. One famous saying goes thus: what amrit is to the gods, buttermilk is to human beings.

Known as takram in Sanskrit and lassi, chhaachh and moru in parlance, buttermilk has been discussed in almost every ayurvedic text. It is said to be the best among all the milk products. Two other varieties of buttermilk also find mention in ayurveda. One is called ghola, which is made by simple churning of curd without water. The other one is known as mathita or maththa. It is basically crushed curd with a little water added to it.

Buttermilk is a highly acclaimed medicine for diarrhoea, dysentery, chronic specific and non-specific colitis, jaundice, and also in conditions where liver and spleen dysfunctions are involved. It is also used in some of the panchkarma procedures. Mixing of half teaspoonful of dry ginger powder in a glass of buttermilk adds to its digestive and carminative properties. People suffering from chronic sprue can also take buttermilk preferably before noon. Those suffering from first-degree piles get symptomatic relief by the use of buttermilk. For this purpose, one to two grammes of hararh powder can be taken twice a day with a glass of buttermilk for some time. Buttermilk should not be consumed when suffering from rheumatoid arthritis, severe constipation, asthma and following immediate exposure to heat.

Contrary to its name, buttermilk contains no butter at all. Defining buttermilk, acharya Sushruta has written that it is a compound made of curd and water, subsequently churned so as to have the contained cream and butter completely skimmed off. Its typical composition is about 0.5 per cent fat and 5.5 per cent milk solids (proteins, minerals and vitamins). The rest 94.0 per cent is water! A glass of buttermilk contains only 20 calories.