Checking population growth through the ages

The concept of family planning control dates back to the ancient Greeks. Though many scientific advances have been made in the field since then, a solution to the global population crisis is still not in sight.

Checking population growth through the ages 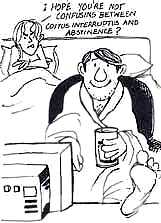 THE DEBATE on abortion between pro-choice and pro-life supporters is as old as antiquity, historian Angus McLaren says in his book, A History of Contraception. McLaren argues the issues raised by even the most recent breakthroughs in reproductive technologies are firmly rooted in the cultural traditions of the West. He contends a woman of early this century, faced with an undesired pregnancy, was not likely to feel too differently from her counterpart in the 18th or the 13th centuries.

The issue of when a foetus is to be considered a human being -- a raging issue even today -- did not nag ancient Greeks, whose philosophers maintained nascent life had only limited rights. A male foetus was not a rational or ensouled being until after 30 days, according to Hippocrates, and 40 days according to Aristotle. The age for the female foetus was 80 or 90 days. The Greeks envisaged the existence of a variety of souls: nutritive for plants, sensitive for animals and rational for humans. The foetus, in moving through these various levels, would be viewed by the Greeks as alive from an early stage, but only in the same way as the corresponding soul. Aristotle even held semen and menstrual fluid had souls.

Different cultures used different methods to limit family size. Today's doctors may tell us that most of the touted purported abortifacients and herbal contraceptives of earlier times could not work, but for people living then, these concoctions had both symbolic and practical value. At the least, exchanging such recipes among women shored up a sense of female solidarity; at best, some did provide a vital margin of protection.
There is abundant evidence that a vast variety of fertility controls were practised in the past. Abstinence, abortion, coitus interruptus and extended nursing were methods used by the Greeks and which have remained as the basic forms of family limitation for most people till well into this century. It was not until the 1960s that the oral contraceptive and the plastic IUD (intra-uterine device), were developed and available for use.

Coitus interruptus was the main form of contraception in the ancient world and it remained so in 19th century Europe and even as late as the 1970s in France and Czechoslovakia. In ancient Greece, according to Aristotle, homosexuality was officially supported in Crete as a method of population control and resorting to courtesans was widespread. For the Greeks, manipulation of fertility was desirable and it was believed to be possible. Plato, responding to a query how population stability could be ensured, replied, "There are many devices available. If too many children are being born, there are measures to check propagation. On the other hand, a high birth rate can be encouraged and stimulated by conferring marks of distinction or disgrace."

Many of the Greek attitudes to limiting procreation continued to prevail until the Middle Ages (See box).
Ironically, the condom -- generally considered the most effective contraceptive developed in the early modern era -- played only a minor role in the decline of fertility because it was used mainly to avoid venereal disease. In 1564, Gabriello Fallopio described a small linen covering that could be used for the penis to prevent infections. Condoms were made of animal bladders or fine skins upto the 1700s.

In 1816, condoms made of sheep gut with a ribbon to tie off the open end were in use. In Europe, condoms of animal skins and silk were in use until the 20th century. French propagandists provided information to housewives on how they could make condoms from animal intestines bought from butcher shops. At the end of the 18th century, condoms were known to be available in brothels in London, Paris, Berlin and St Petersburg.

But 10 years after Goodyear and Hannock patented their rubber vulcanising process in 1844, rubber condoms were available for sale in the US at $5 a dozen. But even washed, dried and re-used, these condoms were still too expensive for the lower classes. Furthermore, condoms found limited acceptance in the 19th century because they were associated with prostitutes and venereal disease. An indicator of the embarrassment with which they were viewed was that the British called condoms "French letters" and the French referred to them as la capote Anglaise.

By the end of the 19th century, barrier methods of birth control, such as the diaphragm, then known as the womb veil, were developed. The diaphragm, accompanied by douching (cleansing with a liquid such as vinegar, capable of killing sperm), was an effective but expensive contraceptive that had to be fitted by a physician. This restricted its use to the middle and upper classes.


Commercial houses at the turn of the century began to develop acidic powders and jellies to block and kill sperm. But easier to use was the soluble quinine pessary or suppository, developed by the Rendell company in England in the 1880s. Other home-made products utilising both barrier and spermicide were soon being made from cocoa butter and glycerine by innovative housewives in USA and the UK.

All through history, a dominant reason for the concern for contraception has been the regulation of the working class population. It is usually assumed the working class breeds faster and in larger numbers. Even in the 1930s, American social conservatives such as Clarence James Gamble (a soap dynasty scion) experimented with the mass delivery of simple contraceptives such as lactic acid jelly, because he was convinced that welfare costs could be kept down by limiting family size.

In the 1950s, family planners positing the Third World's population crisis could be solved only through the adoption of Western contraceptives, popularised the concept that science had triumphed over fertility. Western societies, they cheerfully conceded, were once as incapable of rationally restricting family size as societies in the developing world today. The emergence of a "modern mentality" was what saved them, family planners argued, and the Third World's salvation was rooted similarly in modern medicine.

Such fallacious approaches have since proved disastrous. The new contraceptives, even after adoption, often only replace traditional birth-control methods. More worrisome is the finding that modern methods could undermine the success of traditional fertility-controlling practices. Oral contraceptives, for instance, put an end to a woman's ability to space births by extended breast-feeding. They thus have the reverse effect of actually raising the birth rate.