Conservation of fruits may be difficult, but that is no excuse. Preservation of national assets should be given top priority 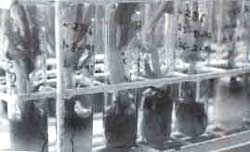 Conservation is a positive step towards preservation, maintenance, sustainable utilisation, restoration and enhancement of the natural environment with its diversity. However, conservation of fruits certainly needs more government attention than what it currently gets. Research institutes lack funds for establishment of gene banks or to carry out conservation programmes. "Through the years, a large amount of germplasm has already been lost. Though there have been national programmes to collect fruit diversity, efforts have been sporadic. There are still many fruits out there in the wild," says Chadha. Many traditional and weedy species of fruits, which are prospective sources of disease resistance, are threatened with extinction. There are two types of conservation approaches: in situ and ex situ. Conservation whereby plants are grown in their natural habitat is in situ or on site. However, in situ conservation is difficult especially in large areas where diversity exists in abundance. An in situ sanctuary, especially for citrus fruits, has been established in the Garo hills of Meghalaya, However, horticulturists feel that this is a waste since only one type of citrus fruit is found in the Garo region.

The major conservation approach should be ex situ conservation where the seeds are wither-dried and preserved in controlled conditions in field gene banks or in a laboratory where it is grown under artificial conditions. These seeds are then tested for viability by planting them out every few years. The whole idea is to ensure that local cultivars (a cultivated variety of a plant) and wild varieties can be saved over long period of time, and yet be available to breeders when required (see table: Banking on genes).

Seeds of most tropical fruits are recalcitrant - that is, they are no longer viable after the drying process. Storing plants by multiplying them by vegetative methods is a more tedious process and success is not guaranteed. Biotic and abiotic stresses coupled with an apathetic attitude towards conservation have already taken their toll on a large gene pool of the few citrus species that are native to India. Also, monoculture of economically important species is threatening the existence of many lesser known species.

Some national attention to genetic resource activity has resulted in the development of some commercially cultivated varieties, but more needs to be done. Also, the government should be made aware of fruit diversity being a part of national wealth. Collection and conservation of genetic diversity as well as improvement of species to increase economic value should be a national priority, feels Chadha. The department should try to repeat the her revolution with other less preferred fruit species too.

Some of the reasons for loss of Indian fruit diversity are:
• deforestation. A lot of genetic erosion has taken place due to deforestation and urbanisation. Wild varieties of cultivated fruits existing in forests and other rural areas are important sources of germplasm which can be tapped for improving cultivated varieties. These varieties are mostly disease-resistance, pest-resistant, have a better colour, taste, flavour, and longer shelf life. Clearing of hedgegrows which once served as diversity banks, and land off its natural vegetation for construction of dams, roads, railways and houses are mainly responsible for genetic erosion.

• commercialisation of a few varieties of a few fruits, many of them not even of Indian origin. Owners of orchards or large plantations are switching over to these varieties. This has been observed in the case of the declining citrus groves in the north-easten states and the old mango orchards of Uttar Pradesh, West Bengal and Andhra Pradesh.

• changing food habits leading to changing demands is resulting in a greater demand only for few varieties.

• conservation of fruit diversity is not a priority research area.

• share of the finances allotted to agriculture is hardly commensurate with the requirements, even with the export that fruits earn. For the Ninth Five Year Plan, horticulture has been allotted 7.7 per cent of the agricultural budget, while fruits comprise 25 per cent of agricultural exports. "We could definitely do with some more resources," says Chadha.

• proper genetic assessments leading to effective utilisation of tropical fruits have not been carried out.

• specific ethnobotanical studies have not been carried out, nor have locally useful diversity been assessed to promote socio-economic gains to rural communities.

• efforts at exploring diversity within fruits is pitiable. This includes the search in fruits like citrus, banana, mango, tamarind, ber, aonla, karonda, jamun and ker.


The need to conserve the genetic diversity is even greater now, given the low number of cultivated types and the rapid genetic erosion in the diversity existing in the wild. Conservation strategies are required for protection of all the major and minor tropical fruits through the in situ and ex situ approach. This could be done by:

• stepping up of germplasm exploration, collection and conservation centres.

• characterisation, evaluation and documentation of the conserved germplasm.

• intense research on protocols for conservation, identification and characterisation of the species.

• setting up of a central germplasm information system backed by a network with data in store.

• pressing for financial assistance from the government.

As of today, some genetic diversity still exists in fruits owing to the large geographical area, diverse climate conditions and nature of origin. However, given the government's apathy towards the survival of fruit varieties as well as a host of other factors, there is no guarantee that the scenario will improve or not deteriorate in the near future. Many of the fruits savoured by the children of the sixties and the seventies, leave alone earlier generations, are not seen any more. Take phalsa, for instance. Gobbling a handful of phalsas into your mouth and relishing the tangy taste while allowing your mouth to turn red is just one of the many memories associated with fruits of yore. And as for khirni, when was the last time you saw it in the market?