Eco-development in India had no clue 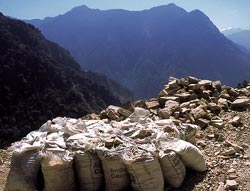 Both the Forestry Research Education and Extension Project (FREEP) and its later, larger avatar, the India Eco-development project (IEDP) had a single objective: conserve biodiversity. What also made it a different form of rural development, quite unlike anything government had hitherto done, was the equal emphasis on improving the lives of people in tandem with the forest. But, to date, the impacts of village eco-development on the ecosystem, in both the projects, remain elusive. Worse, the a priori assumption that villagers and tribals are the primary consideration in any PA that needs to be eco-developed remains contested. Kalakad Mundantharai Tiger Reserve, a FREEP site, is affected by an entire colony of government officials living inside the forest, 28 other enclaves of human habitations and a large network of dams providing water to the parched Tirunelveli district. While this project did tackle the harm done by headloaders and cattle to the forest, it refused to fight uncontrolled tourism and an entire township in the heart of the park.

Park authorities often never look beyond the obvious. Critics say this is due to a lack of understanding -- or a failure to acknowledge -- how informal economies flourishing at forest fringes work. In Nagarhole, honey collection continues though the forest department claims to have reduced the pressure of non-timber forest produce. Cattle foraging, driven by the coffee planter's demand for dung as manure, is happily degrading the forests. The cattle, and the dung they produce, may be too lucrative for cattle-owning villagers to forgo in exchange for any sop the forest department offers, says M D Madhusudan, a member of Msyore-NGO based Nature Conservation Foundation who has studied the impact of Coorg coffee prices on the adjoining Bandipur sanctuary due to change in cattle grazing levels.

In fact, in the Great Himalayan National Park, the entire initiative to reduce pressure on the forest by providing alternative livelihoods was negated when the state government permitted work on the Parvati Hydroelectric project in Sainj valley on the park fringe. The people in the valley now find it easier to be daily wage labourers. The pressure on the forest is now more devastating: "The population at the worksite has almost trebled from about 2,000 to about 6,000," says Vijay, a resident of Sainj valley.

Both sites prove a simple point: the zones of influence that impact PAs vary with location and, more importantly, with time. The artificial two-kilometre baseline, which IEDP drew and works with, became a bad surrogate to work with. As with headloaders or honey collectors, preventing the mere frontline agents of multi-million rupee trades from actual field collection is bound to fail. Very few rural -- and informal --economies remain ex-cluded from the market-based economy today. So government needs to distinguish and discern before it prescribes. If demand persists, someone will supply. The key therefore lies in managing the supply, rather than stifling it naively.


Both projects needed to, and on paper promised to, first show the negative impacts people had on forests. For this, what was required was a way to measure -- in real time; before, during and after project-based intervention -- such effects. In short, an ecological baseline of clearly laid down parameters. These would have shown the status of the forest's health before project intervention, also allowing the change in the value of these parameters to be monitored. In most parks, the benefits of village eco-development and PA management remained fuzzy because no parameters were drawn up and shared with people. At best, indirect or anecdotal information acted as proof. "The assessments were not as good as we would have wished," says Kathy Mckinnon of the World Bank. The government claims that the regular census studies and surveys were ample measures of success or failure. But Ravi Chellam, a wildlife biologist and programme officer at United Nations Development Programme's India office, rejected such claims at the June 2004 IEDP conference. "The usual census studies and surveys conducted are not of use here; they are, to say the least, of doubtful quality," said Chellam.

IEDP project director Rajesh Gopal claims the data exists but has been lost in the PAs and states. "It has not been accessible centrally, I agree, and that has been a problem. But the management plans of each site were updated using the latest technology, and GIS mapping was done to create baselines."

But critics claim the absence of public records on these supposedly-listed parameters allows project proponents to pat each others' backs and conclude that the work was well done. "As long as there is no clear measure of success, anything can be passed off as great," says a consultant involved in reviewing the work for the project.

Empirical criteria would have made it impossible, for example in Nagarhole, for IEDP managers to claim there was significant benefit in such work as clearing 2,000 ha of lantana or hoeing 5,877 ha of bamboo. These are just two of several wasteful and useless activities, says K M Chinnappa, former forest department ranger and now a critic of the corruption that hit Nagarhole after IEDP's massive money injections.

In Gir too, Chellam questions incessant check dam building. "Have we really assessed what will be the consequences of turning shallow ponds into deeper water bodies and a semi-arid landscape into a moisture-laden one? We need to look beyond the lion and beyond just tomorrow." If scientific evaluation had been conducted, PA managers' universal fetish for civil engineering would have been questionable, but in the absence of data they build culverts, check dams and water holes, much as builders like to construct business centres in cities.


Not that research was lacking. A bibliography compiled by the Indian Institute of Planning and Administration shows that more than 100 different reports were published for the two projects. Each park, Ranthambore excepted, spent money on research. Nagarhole, the most controversial site of all, carried out the most studies: 22. But a 2004 draft report assessing IEDP, by the IEDP directorate, states: "Many (of these) studies were of no direct significance to the mandate of the project and quite a few were of equivocal quality." This is mildly put. Studying mites and mosquitoes in the Nagarhole park as part of IEDP points simply to the fact there has been no peer review of the research done. Ergo, there is no accountability for mediocre work or mere bad choice of studies.

Truth is, India has never known why these national parks were created in the first place, what conservation values government wanted to protect. Where the landscape was the territory of large mammals like the tiger or the elephant, the government demarcated it as their fiefdom, not paying attention to, or prioritising ecological aspects. Should it, say in a park, preserve or improve the hydrology, even at the cost of some amphibian species? As all ecologists and conservation biologists will tell: there is no such thing as conserving biodiversity at large.

It was not just ecological studies that were conducted without any peer review. The social science research carried out in many sites, with a couple of exceptions, was also dubious. In Nagarhole, social science researchers got away with asking questions like "do you (tribals) have a cinema or television inside the park?" and concluding that life would be better outside the park than inside. Some Kurubas of Gadde hadi, hired to get the questionnaires filled, even today remember how the records were filled, at times, sitting in forest department offices and how the report was all 'managed' to ultimately claim that more than 75 per cent of them wanted to get out.