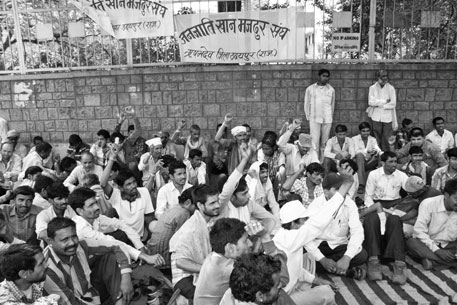 Sheetal Meena (name changed) could hardly breathe as she shepherded her goats in Udaipur’s Odwas village. The air was filled with dust from the marble mine waste. The only lake in the village was a slurry of marble waste and there was no water to drink. So the 25-year-old, who belongs to Bhil Meena community, a scheduled tribe, entered the compound of Karni Marble Mines. She saw an earthen pot outside the supervisor’s office, but Vijay Singh, the supervisor, told her to drink water from the pot kept inside the office. As soon as she entered the office, Vijay and two others rushed inside and locked the door. They tried to rape her, but she managed to escape with the help of other Meena women who had been tending their animals nearby.

Sheetal, wife of a miner, says officials at Kherwada police station refused to file her complaint. Instead, they registered a complaint by the owner of the mine who accused the women of trespassing the mine’s boundary. On May 3, she filed a complaint at the lower court in Udaipur. On its directions, the Kherwada police are now probing the case.

“The rape attempt is a fallout of more than a year-long conflict between residents of Rishab Dev tehsil and mine workers on one side and mine owners on the other. More than 5,000 mine workers stopped work for three months, demanding minimum wages,” says Ramesh Nandwana, advocate and former president of Udaipur Bar Association.

There are 177 mines in the 12 villages of Rishab Dev tehsil. These produce 89,000 tonnes of high quality green marble every year, according to Rajasthan Department of Mines and Geology. The tehsil boasts of being the only place in the country to produce green marble. Most of it is exported to China, West Asia and Europe, and generates revenue up to Rs 1,300 crore per annum, states the Indian Bureau of Mines’ yearbook, 2011. 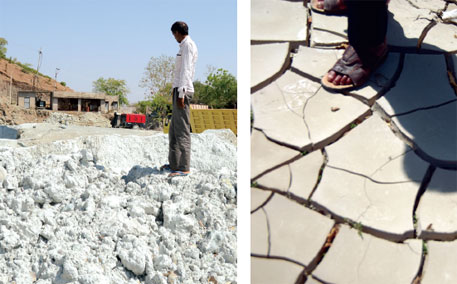 Kalu Meena, who works at Karni Marble Mines, says the marble can cost from Rs 4,000 to Rs 12,000 per tonne. Even at the lowest price, the mines would be generating Rs 35 crores in a day. “But miners get only Rs 200-Rs 250 per day for their highly skilled labour. One miner works for 12 hours a day and does the work of three skilled miners,” he says. According to the Labour Department, a skilled labourer in the mining industry should get at least Rs 382 per day.

On January 22, the miners began their strike demanding minimum wages, provident fund, eight hours of work and a day’s rest. But they were forced to call it off on May 8. “There is no job option here. It is either mining or farming. Our families were starving so we had to end the strike,” says Kalu. The workers’ union signed a Memorandum of Understanding in which they were promised minimum wages and provident fund.

Marble’s journey from the mine to the market involves two major processes—cutting and polishing. During these processes, the marble loses 50 per cent of the stone. This waste is haphazardly dumped near the mines.

Rajiv Gandhi Pathshala, the lone primary school in Odwas, is located close to a mine. It has no space for children to play. Mine owner Tarachand Jain had promised that he would level the playground with waste. But he did nothing after dumping waste there. Students attend their morning assembly amid marble boulders. “White dust enters classrooms. We told the mine owner to remove it, but these people are very powerful,” says schoolteacher Daulat Ravji.

Agricultural fields and pastoral commons here are layered with slurry, which accounts for 20 per cent of the total waste. According to a research published in Journal of Environmental Research and Development in June 2013, Rajasthan generates 5-6 million tonnes of slurry. This can neither be treated nor disintegrated. According to the Indian Bureau of Mines’ yearbook, slurry reduces soil’s porosity, waster absorption and percolation levels. It also affects groundwater recharge. During monsoons, it flows into rivers, drains and other water bodies, affecting water quality, reducing its storage capacity and damaging aquatic life. “After the slurry dries, the finer fractions become airborne and pollute the air,” states the yearbook.

Ranchhod Meena of Masaro Ki Obri village was a farmer once. “I work in the mines now and live on rent with my family four kilometres away,” he says. “I cannot grow two crops a year on my 1.5 hectares (ha) as I used to. I can only sow maize. Besides, the dust has caused cracks in my house and it is too dangerous to live in,” he says.

The mines have also caused deep water crisis in the tehsil as it uses up a major part of the area’s water. Wire saw, which separates marble blocks from the hills, uses 45,000 litres of water in an hour, states a petition filed at the Rajasthan High Court. Raising the concern, in 2003 the High Court had closed 227 mines in Udaipur. But 10 years later, the situation is worse. The World Wildlife Fund’s 2013 estimate shows the marble industry in Rishab Dev uses 117 million litres water in a day—almost half the water requirement of a Tier 2 city such as Pune.

Ranchhod’s neighbour Ashok Meena regrets having allowed a mining company to dig two borewells on his agricultural land about five year ago. “Water table has dipped drastically. I never thought the company would use water this way,” he says.

This apart, people in the tehsil live in constant fear of the mines. On April 22, Raju Meena died as he fell in a pit and lose rocks buried him alive in Suresh Mines. “Mine owner Bhagwati Lal Kumawat gave us Rs 6.6 lakh cash and a demand draft of Rs 10 lakh as compensation,” says Raju’s brother Babu Meena. “But two days later, Kumawat filed a police complaint accusing us of blackmail and extortion,” he adds.

Ninety per cent of the population in Rishab Dev comprises Bhil Meenas. Under the Fifth Schedule of the Constitution, land in tribal-dominated areas must be owned by tribals. “But owners of 140 mines are non-tribals. Many are government officials and members of the Legislative Assembly,” says an official at the state’s mines and geology department who did not wish to be named. The list of mine owners shows, of the total 197 ha leased to the marble industry, 96 ha is reserved forest area and 35 ha is pastoral land.

Mining companies try all means to usurp tribal land. Kalu was earlier arrested when Ratansinh Mahecha, owner of V P R Marbles, filed an fir accusing him of encroaching forestland. “For years my parents have been living in Masaro Ki Obri. Mahecha wants my parents to sell the land so that he can start mining there,” he says.

Down To Earth’s several attempts to contact mine owners failed as none was ready to give comments.

People in Rishab Dev live in constant fear of the nexus between miner owners and the police. A witness to Sheetal’s rape attempt has given a statement in court that one of the accused boasted that nothing can happen to him because the local superintendent of police was his jaati bhai (caste brother).