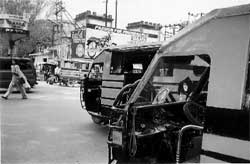 It is a sight which Suresh Rawat, a hotelier in the hill station of Mussourie that overlooks the town of Dehradun in Uttar Pradesh, could do without. Every winter, thick blue smoke envelops this town, casting a shadow on one of the most picturesque valleys in Asia. "Doon is a broad valley. This sometimes gives rise to a lateral inversion that does not allow hot air to rise from the valley. As a result the smoke settles over the valley," says Hugh Gantzer, resident of Mussourie and a member of a monitoring committee set up by the Supreme Court to restore the "natural normalcy of the Doon Valley".

Down in the valley, Tarun Pal, a resident of Dehradun, is wary of the first rains of the monsoon. "They leave scars on my car," he says. "I am sure that the rains here are acidic, although no studies have been conducted," says Anoop Kumar, editor of Doon City Chronicle, a local magazine.

Air pollution in Dehradun has been in the headlines for some time now. More than a decade ago it was limestone mining, but this was banned in 1986 by the Supreme Court in response to a public interest petition. "Although the spm levels have shown a downward trend over the years, they are still above the prescribed limits at all the monitoring sites in Dehradun," says Shobha Chaturvedi, assistant scientific officer with the Uttar Pradesh Pollution Control Board (uppcb). In 1997, the city's annual average spm level was more than twice the permissible limit and the maximum spm level was more than thrice the standard. Moreover, spm levels were higher in residential areas compared to industrial areas.

Today, vehicular emissions are the main reason for air pollution. According to the road transport authority, only 10,000 vehicles were registered in Dehradun between 1937 and 1967. There are more than 126,452 vehicles plying on the roads at present, more than 100,000 of these are two-wheelers. However, the length and width of roads have increased only marginally. Result: traffic congestion. "Air pollution is concentrated in the middle of the town. The Saharanpur road, Gandhi road and the Railway station areas are the most polluted areas," says Kumar.

A study by the Dehradun-based People's Science Institute (psi), a non-governmental organisation, says, "The abnormally high levels of spm in Dehradun are mainly due to natural dust and particulate-laden smoke from diesel-fuelled vehicles, especially Vikrams, trucks, buses and three-wheelers." The impact on public health has been telling. psi functionaries say the prevalence of respiratory diseases has risen alarmingly over the past decade and most cases are linked to air pollution. The institute conducted a study in which it selected a few plants and monitored the growth of their leaves at four sites in the town and one control site far away from the town. "We found that the growth of the bougainvillaea, lantana, litchi and mango was severely hampered by air pollution. However, some pollution-tolerant plants like jambolan (jamun) were not affected," says Anita Dutta of PSI.

"Vikrams are petrol-driven, but the replacement rate of petrol engines by diesel engines is about 99 per cent," Kumar says. Officially, about 2,050 Vikrams are registered in the town. "But there are several Vikrams registered in nearby towns like Saharanpur plying in Dehradun," says Ravi Chopra of PSI.

Another cause for concern are two-wheelers. "In the absence of a public transport system - and Vikrams being the only alternative - most middle-class people prefer scooters," says Gantzer. "There is also a class distinction attached with Vikrams. Most people prefer their own vehicles," adds Kumar. He points out that a survey conducted in the late 1980s revealed that on an average, each Dehradun family owned two vehicles. In some cases it was even three. "This number must have increased considerably by now," Kumar comments. Till a viable alternative is found to Vikrams, the sight that a tourist will behold from Mussourie, will not be a pleasant one.