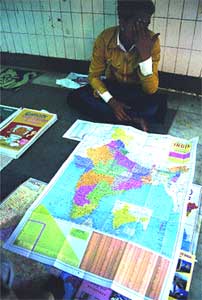 Behind the mass of confusion over maps lies a basic problem: India has no mapping policy. To fill this vacuum, various authorities have arrogated to themselves regulations of using, printing, publishing and developing maps. Geographical information is also not part of the more fundamental right to information. While the state regulations on right to information (wherever enacted) remain silent on it, there has been no clarification on this count either by the courts or the government.

Perhaps India should look at Japan's mapping policy. Says Prof Shunji, general secretary of the Asian Association on Remote Sensing, Japan, "Any type of (geographical) information, including large-scale maps and aerial photographs are available. Any foreigner can purchase any map and aerial photograph of Japan without any restriction. The Japanese are guaranteed the right to know about the area they live in. It is the duty of local governments to inform people about risks, so helping them in natural disasters. The nation who knows best about the country can defend best." The US and the EU also have progressive norms for sharing of geo-spatial data.


India's mapping policy is on the anvil. Various ministries are discussing a draft. But indications are the policy is going to be as antiquated as current regulations. Union minister for science and technology, Kapil Sibal, recently told journalists the policy might opt for two sets of basic maps, one for civilian use and the other for defence forces. The restricted area is not to be reduced; it will remain at 43 per cent. Also, these maps will omit heights, contours or latitude and longitude. This means the maps will be redundant for anyone who wants to add (or layer) information on them. They will merely be high-resolution pictures one can see but not improve or manipulate to needs.

Now for the nadir. The draft policy suggests all institutions wanting to use these maps must first inform or 'take permission' from SOI under a new National Map Transaction Registry. Critics say this is preposterous. Even bureaucrats agree. As the surveyor-general of India, P Nag, admits, "A lot of bureaucracy will be introduced." SOI will become the 'big daddy' instead of the ministry of defence.


Problems do not end there. While topographic maps are generated by SOI, several agencies develop and publish hundreds of other maps. How does one access them? The answer lies in creating a spatial database infrastructure -- a centralised database of maps and geographical information accessible over the Internet, or otherwise. Several countries have already done this. India, too, has been planning such a database, called the National Spatial Database Infrastructure (NSDI). But the NSDI proposal has been in limbo for more than two years now.

Why? Simply because if there is a good NSDI, every department and government body that generates a map becomes obliged to share it with the public. The bureaucracy likes to think it has the onus on what people need to know. Imagine a situation where the local municipal body is forced to share information on where it has allowed development as compared to what was originally planned (in master plan maps). Where a road or a water pipeline was envisaged and was never built. Imagine a situation where the government is made to reveal it is planning to shift tribals from forests because it plans to prospect for minerals.

Besides the potential to create an unsavoury situation for the bureaucracy, NSDI is also an expensive proposition. Gopal N Sarma, of Feedback Strategic Consultancy Services (P) Ltd, informs in a report that the US has invested about US $15 billion for such a database system whereas the UK has spent about US $3.3 billion. He says India would need to invest Rs 25,000-30,000 crore to set up a robust database. He estimates government and private interests are spending about Rs 2,500 crore annually to maintain alternative systems of sharing this information -- a mere 10 per cent of what is required. An annual outlay of Rs 7,500 crore is proposed for setting up nsdi through combined funding.

Though expensive, such a database is essential. For instance, consider land records. These are maintained in local offices in rotting old documents, on cadastral surveys done decades ago. If you wish to know who owns a piece of land, you go to the local land registrar and ask him/her to dig out the information from a dark dingy storehouse (obviously easily accessible if there is money to back up the wish). A mere 4,00,000 of estimated 12,00,000 properties in Bangalore pay taxes, Ravi Gupta, editor of gis Development, points out. The government is now digitising land holdings under the Bhumi project. In UP's Mirzapur district, a similar digitisation of municipal maps has helped double tax revenue. Setting up NSDI is reasonable. After all, loans of about Rs 100,000 crore are availed for property purchase and housing annually. Yet, India relies -- still -- on outdated survey records. No wonder more than half of civil cases in local courts are about land.


The lack of government initiative has not prevented private interests from setting up such infrastructure on their own: the Reliance group today has one of the largest and strongest geo-spatial databases in India. Of course, this database will cater to groups that can buy the information. It is not for public service. Senior bureaucrats in the Union ministry of science and technology are impressed with the database. "You can get details of where to lay an oil pipeline. A telephone network company can get maps to see where and how to lay its network," says one bureaucrat. "It is not yet comparable with what the government could create with the extensive cadastral and base maps it has. But in the absence of an alternative, it's the best in the country," he admits. Other groups are also trying to create databases, but at smaller levels. Ashoka Trust for Research in Ecology and Environment, a Bangalore-based non-governmental organisation which relies heavily on GIS-based tools, is collaborating with Hewlett Packard to set up an open source database of maps. There are hundreds of such efforts being made on open source platforms or for profit.

But developing piecemeal databases often leads to duplication of effort; consequently, loss of time and money. Take SOI, which has almost completed digitising its toposheets. In the next two years, it will develop digital maps of all villages in India. The Central Ground Water Board has already mapped each and every water body of the country. The forest survey has extensive forest cover maps. Yet, if an NGO wants to look at a village from an ecological perspective, it has to first get hold of a block map from the local administration to retrace the village lines (if the local administration has one and is willing to share -- it's not obliged to), then map small rivulets and ponds on the basis of ground surveys and satellite imageries and re-evalute and classify forest cover on its own. For a single village, such an effort can take from a week to six months.

Yet the government continues to sit over the NSDI proposal. The last meeting of the group of secretaries to the Union government on the issue was to be held on October 23, but was postponed. Says Ramamurthy, secretary, Union ministry of science and technology, "Now more than ever before there is pressure to get moving on the national mapping policy and the NSDI." He shies from commenting on the role of the Union ministry of defence in this matter, but sources in his department as well as observers admit his hands are tied. 'National security' is a term hard to deal with today, or to argue against.

But even the ministry's concerns seem to lie elsewhere. While the people wait for simple things like a village map to come their way, the ministry is busy negotiating high-end services such as providing GPS-based navigation system on vehicles. This, it is sure, can be achieved by January 2005 in six large towns and metropolitan cities.

But when will an Indian citizen get access to a basic map? When will the right to geographical information become a fundamental right? The government has no deadline on that one. It wants none.

With inputs from T V Jayan