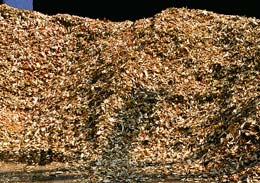 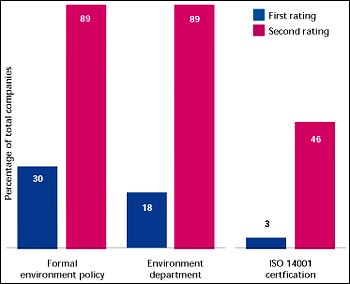 The sector has made significant improvement in the enunciation and enforcement of corporate environment policy and management system.

During the first rating, only 30 per cent of the mills had a formal environment policy. This increased to 89 per cent during the second rating. Sixteen mills adopted their policies between 2000 and 2002.

In the second rating, 25 out of the 28 companies rated had an environment department. A dedicated unit-level environment team was one of the GRP's recommendations in the first rating, as very few mills had an environment department. Also, during the second ratind period, 13 of 28 companies received ISO 14001 certification; seven are in the process of receiving it. In the first rating, only one company was ISO 14001 certified. This is a major turnaround. 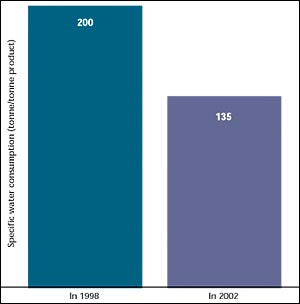 Indian paper industry was, and still is, notorious in its misuse of water. It was therefore not surprising that the first rating showed that average water use in Indian companies was as high as 200 tonnes per tonne of paper produced -- ranging from 175 tonnes, to a staggering 415 tonnes of water used per tonne product in Ballarpur industry's Shree Gopal unit.

But still there is a long way to go. Current consumption levels remain far higher than the global best practice. 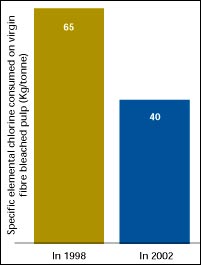 By 2002, the scenario had not changed drastically. But GRP found that all companies had become conscious of their chlorine load and taken measures to reduce total chlorine consumption. It is great that ITC Ltd-Bhadrachalam unit now has ECF technology. Can others follow?


Paper mills are voracious users of wood and bamboo. But this need of the industry, which has decimated forests, can also become its great strength. Paper mills can generate huge employment and provide livelihood support by sourcing wood from farmers.

In this rating, raw material sourcing as an indicator shows major improvement. Industry is now increasingly sourcing more and more of its raw materials from farm and social forestry. It is investing in research and development to improve the productivity of plantations. As a result, land under the farm and social forestry programmes has doubled: from 20,000 ha in 1998 to 40,000 ha by 2004. 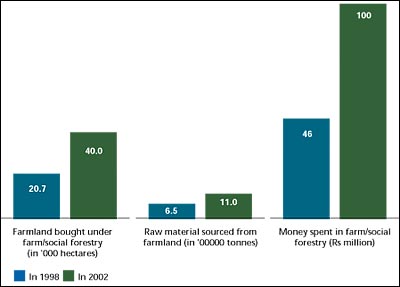