Some sectors will struggle to be the best, some can’t as they operate in tropical India

Some sectors will struggle to be the best, some canÔÇÖt as they operate in tropical India 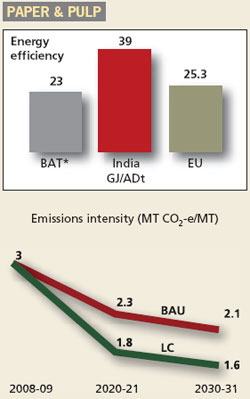 The Indian paper industry performs poorly with respect to energy consumption and greenhouse gas emissions. The study indicates an energy-saving potential of nearly 70 per cent.

This sector is a very good example of the fact that there can exist limits to mitigation. The sector will always lag behind global best performance in energy and emissions intensities. This is because of its inability to profitably scale down best practices. Indian mills are small and are likely to remain so in the future. Inconsistency in the nature and quality of raw materials, and the fact that Indian mills are multi-product in nature, pose further limitations.

The source of raw material for paper production will decisively shift towards wastepaper and market pulp in the future, reducing the overall emissions intensity. The sector can reduce its emissions intensity by increasing the share of internally generated biomass energy. For this, the black liquor solids must be efficiently used through multi-effect evaporators or gasification systems. Continuous cooking systems will have to be adopted. Electricity consumed may be reduced by adopting efficient, large paper machines and installing variable speed motors, pumps and drives. 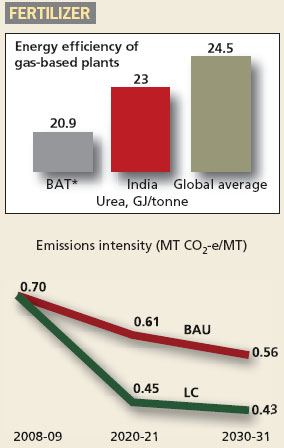 About 78 per cent of India’s urea production is from the efficient natural gas feedstock. The performance of gas-based plants is very good when compared to both global averages and the best practice.

Low carbon growth in this sector will require converting all existing plants, and additional production stocks, to natural gas as feedstock. The industry can reduce its total emissions in 2020-21 over 2008-09 levels just by conversion to natural gas. Therefore the most critical issue the sector’s future faces is this: will natural gas be available so that such conversion is possible?

The government has set an ambitious target of lowering the energy consumption in Indian urea plants by nearly 11 per cent below the global best practices through research into high pressure reformers and shift catalysts, membrane based CO2 removal systems, low pressure catalysts for synthesis and solid oxide fuel cells for captive power generation.

If these plans bear fruit, this sector can further improve its emission profile. How big an ‘if’ is that? 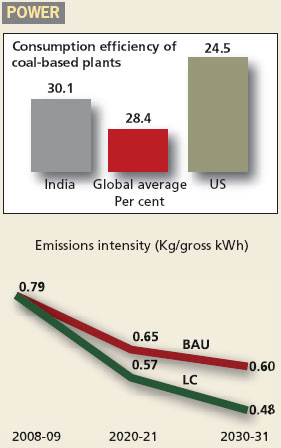 Coal-fired power generation in India is more efficient than the global average—30.1 per cent net efficiency compared to 28.4 per cent globally. Of course, efficiency is lower than what’s achievable using advanced steam parameters and better grid- and load-management practices. The low quality of Indian coal results in specific emission from coal-fired plants in India of 1.1 kg/kWh; this is about equal to the global average.

The efficiency of gas-fired power generation in India, 41.9 per cent, is also about equal to global average.

The sector has typical limitations: climatic conditions of operation, such as high temperature and humidity, and lower coal quality, will always impede Indian plant performance. Even supercritical and ultra-supercritical coal-fired thermal power plants in India are not likely to provide the same level of efficiency as in western countries because of these limitations.