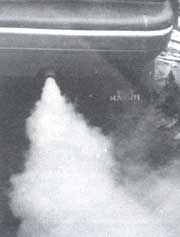 WHILE the general populace awaits April 1, All Fools Day, with some trepidation, fearing a deluge of practical jokes, the gas-ridden automobile industry has an additional reason to look forward to the day this year with dread.

Legislation being championed by the Union ministry of environment and forests (MEF) may make it mandatory for all petrol-driven, 4-wheel passenger vehicles registered in the 4 metropolises of Delhi, Bombay, Madras and Calcutta from that day on to incorporate catalytic convertors to reduce auto-exhaust pollution levels.

This decision, taken at a meeting in June 1993, chaired by minister of state for environment and forests Kamal Nath, is yet to be formalised though. But the ministry of surface transport (MST) is all set to introduce amendments to the Motor Vehicles Act, 1988, to ensure compliance from 4-wheeler manufacturers.

To help tackle the menace of gouts of gaseous killers, the National Environmental Engineering Research Institute (NEERI) in Nagpur, has come up with a catalytic convertor. NEERI's technology will be provided to the public sector Bharat Heavy Electricals Ltd (BHEL) for their mass production. Says NEERI director P Khanna, "We expect BHEL to commence production soon and hope that the marketing of the convertors will start in 6 months." NEERI is also negotiating with Japanese firms like the Mitsui Mining and Smelting Company, the Nagoya Catalyst Company, and Tokyo Roki.

On its part, the Union petroleum ministry will provide unleaded petrol in New Delhi, Bombay, Calcutta and Madras by April 1, 1995. Major oil companies like Indian Oil Ltd and Bharat Petroleum are gearing up to supply the less harmful fuel.
Representatives of automobile manufacturers had told Nath in July that the industry will be unable to meet the statutory requirements if lead-free petrol was not freely available and questioned the necessity of having catalytic convertors, if the prescribed emission standards were met. I V Rao of Maruti Udyog Ltd says, "Only lead-free gasoline can be used for imported convertors. Otherwise the surface gets coated and the convertor becomes ineffective." He says each imported convertor costs between $100-120. Regarding NEERI's convertor, Rao says: "They neither allow us access to the convertor nor provide it to any neutral organisation."

Although MEF joint secretary George Joseph says, "The petroleum minister has given a commitment that the ministry will provide unleaded petrol by the given date," the supply of unleaded petrol may confound the issue and wreck the deadline. According to sources in the Oil Coordination Committee (OCC) of the major oil companies, tetraethyl lead is added to increase octane rating to around 87, necessary for anti-knocking properties. For unleaded petrol (octane rating of 90+), this has to be substituted with mono tetrabenzene ethyl (MTBE), which is not available in India. As MTBE production is not expected to commence until 1997, it will have to be imported, vastly increasing import bills, says an OCC official.

As CO and PH are products of incomplete combustion, the catalytic convertor developed by NEERI is aimed at tackling these emissions from the exhausts of the internal combustion engines. According to A L Aggarwal, head of NEERI's air pollution control division, the convertor can reduce co and ho emissions by about 70 per cent. It is expected to cost between Rs 3,000-4,000 and have a life expectancy of 25,000 km. Khanna claims that with the development of the technology, this will be augmented to 50,000 km. He says the convertor can be used for both unleaded and leaded petrol, because it is resistant to lead deposits.


Says Mathur, who has worked on such convertors for over 2 decades, "It is the easiest, cheapest and most effective way of controlling auto-exhaust pollution, through the after-treatment of gases." He says that the problem with the convertors developed abroad, which are used with unleaded petrol, is that they depend on catalysts constituted of "noble metals" like platinum and palladium, which, apart from being very expensive, have their efficacy destroyed by lead. Besides, although these convertors have a high efficiency of 90-95 per cent conversion, a life of 65,000-75,000 km, and are popular in countries like the US, Japan and Germany, they are extremely expensive, costing over Rs 30,000 each.

Mathur adds, "The impression created that convertors cannot function without lead-free petrol is a myth." He says that the IIT Delhi has designed convertors that use substitute catalysts, such as Monel and sponge iron which have 70-75 per cent efficiency with a 35,000 km life expectancy, and 65 per cent efficiency with 40,000 to 50,000 km life expectancy, respectively, with leaded petrol.

There is, nevertheless, growing uncertainty about the fate of vehicles travelling out to remote areas from the metropolises, once unleaded petrol is introduced in these cities. To mitigate the problem, Bharat Petroleum is planning to introduce a limited number of filling stations along highways. But little action has been taken in this regard in general. As Rao says, "This issue has simply not been looked into." Tongue in cheek, a senior MST official says, "Obviously, this will mean reduced use of cars and, automatically, less pollution."

Despite the controversies, the government seems bent upon introducing the convertors. C S Khairwal, joint secretary in the MST says, "Once the use of catalytic convertors becomes mandatory, manufacturers will have little choice. After the cutoff date, we will refuse to register passenger cars without such devices in the metropolitan cities and periodic checks will be carried out on the manufacturers."

While the issue is still being debated, the impending mandatory utilisation of catalytic convertors continues to fuel the perturbation of automobile manufacturers in the country. And for them this is not a matter to foul their reputations with.