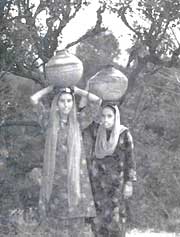 NO entry for agni (fire) here. This was the message the villagers of Patial, in Punjab's Hoshiarpur district, had for the fire-ravaged hills of neighbouring Himachal and Uttar Pradesh. Its very own fire brigade, tempered by decades of fire prevention rather than fighting, ensured that the Patial forests remained unscathed. In fact, the entire community is the fire brigade, and that's the lesson here: community action means progress. However, their self-reliance is under threat today, thanks to the infiltration of alien systems of governance.

A 14 km road from Mehengarwal 16 km from Hoshiarpur snakes along the chir (Pinus roxburghii) forests of the Shivalik hills, past Malot and Kot, to Patial. As you approach the village, you cannot help but notice that the forests are thicker and greener than the sparse strands of village Malot.

Patial's 200 households, mostly Rajputs and Brahmins, grow maize and a little wheat on 300 ha of rainfed land. Its entire 1100 ha of forests are privately owned and cover 70 per cent of the village area. "Forests are our main source of livelihood and we have to protect them at any cost," says Kaushalya Devi, 50, who is also a panch (member) of the village panchyat.

The Punjab Forest Protection Act, 1904, allows the forests to be privately owned. The forest department (fd), of course, can punish certain offences. Felling of trees with a girth less than 60 cm is prohibited. Taking out forest produce requires a permit from the district forest officer (dfo). A security of Rs 9 per tree is deposited with the fd to tap baroza (resin) from pine trees. The stringent forest fire prevention rules are so old that even 65-year-old Jagir Singh, the man who brought progress to Patial (SEE BOX) grew up with them. He says, "Our elders realised that everybody has to come together to fight fires, since fire knows no boundaries."

The rules are clearly the product of a sense of collectivism, and uears of adherence have made them virtually habitual in the people here. "In March, we clear the forest floor of all dry pine leaves and foliage and then dig trenches around the forest," says Shakuntala Devi. Come summer, and smoking is banned inside the forest. What if someone did? "Surely, he will be an outsider -- we cannot break our own rules," replies 67 year-old Karamo Devi. The non-smoking zone is marked out on a small stone. And lighting a fire inside the forest is simply out of the question.

Sometimes, though, the forests do catch fire. "Usually the government forests in the surrounding villages catch fire due to the carelessness of the forest officials. That fire spreads to our forests," says Jagir. Fire from neighbouring Himachal Pradesh also sometimes affects these forests. In that event, the whole village, none spared, helps extinguish the fire. The menfolk throw head the actual firefighting. Women cook food and supply drinking water, besides digging earth. "Even children help the elders by forming a supply line," Bimala Patiali, 13, a student of class VII in the village high school proudly proclaims. Absentees are excommunicated. "In the early 70s we had expelled a newly married couple from the village for their defiance," says Jagir.

"If a fire spreads along with the wind, we start another in the opposite direction, leaving a gap between the 2, which meet and burn themselves out," explains Sanjeev Kumar. Last year 3 massive fires broke out in his 2.5 ha forest within 24 hours of each other. Drum beats immediately brought the entire village to his rescue.

The Patialis are the stuff of legend for the neighbouring villagers. On June 4 this year, a wall of fire from Himachal engulfed large tracts of forest in neighbouring Kot and Behara villages. Every Patiali rushed to their rescue. "We can't let our neighbours' houses burn. Would the fire then spare us?" reasons a prudent Brijlal. Community spirit is not restricted to fire-fighting alone. As early as 1937 the villagers registered a credit cooperative, the Patial Agricultural Cooperative Society (pacs), "to utilise the money available in the village to help each other and foster development," says Jaikishan Patiali, 85, its 1st president. Today, it functions both as a bank and a fair price shop. The profits go to building community assets.

Started with each villager contributing a share of Rs 10, the pacs today has Rs 7,50,000 in its kitty. "The entire sum has been loaned out to the people because it is their money," says Ram Kishan, the present president. The society has never taken government money. In 1978, members fought for 6 months against a government takeover bid. "The government wanted to merge it with other societies of the region. We repeatedly met the cooperative officials and staged a (sit-in) at the district commissioner's office," recalls 70 year old Asha Ram.

The president and secretary are elected for 5 years. On the 1st and the 15th of every month the general body meets to take decisions and distribute loans. "But anybody can come either to me or the secretary anytime to get money in emergencies," says Kishan. Deposits earn an interest of 8 per cent. Loans can be availed of at 13.5 per cent interest on the basis of the amount of land owned -- Rs 10,000 can be advanced for every 0.5 ha. Refunds start after 6 months. Defaulters pay an additional 1.5 per cent interest.

After their long wait for government aid went in vain, the villagers finally decided to build their own community assets too. A primary school was built in 1953, a sarai (community guest house) 3 years later, and an ayurvedic dispensary came up in 1962. The society's own building was completed in 1987 and a temple was constructed in 1993.

It is upon this idyll that the popular election process, pre-election developmental activity, and hence, official aid in tow, intruded. The people's dependence on government assistance grew. The haven went haywire.

With elected panchayats being set up, the villagers started thinking like townsfolk: "In 1992, we elected Shanti Nath because he was an ally of D P Sabarwal, the minister for public grievance. We thought he would bring funds to the pind (village). But he did nothing," alleges Julfi Ram. But Nath fiercely defends himself, "In 1992 the village got Rs 1,40,000 to expand the existing school building and Rs 75,000 for surfacing village lanes."

The moral of the story, so to say, lies here: the forest paradise was lost to urban politics. Today grumblings rumble out all the time...official funds are insufficient; water is not available, the tubewell that was washed away in the floods has not been replaced by the administration; road transport is a matter of gesture. pacs' plans to start a cooperative bus service in 1991 never took off.

The greatest tragedy is that the collectivism has broken down. Different people have differing visions of the route the village should take back to normalcy. And people who dared the forest fires are helplessly looking towards urban aid and squabbling with each other. "People no longer help each other. They have become selfish and have developed big egos," grumbles Kartar Singh, priest of the village temple.