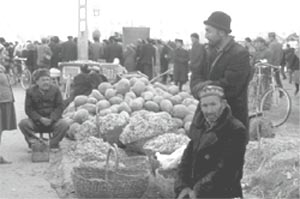 Since 1949, China has shown the capacity to provide adequate nutrition to most of its population. Feeding one-fifth of humankind with only 9 percent of the world's arable land is not easy. Per capita nutrition has increased from less than 1,700 calories per day in 1960 to more than 2,700 calories in 1993. This has come about almost exclusively through increases in domestic food production. However, the concern raised by a number of analysts about food security issues is not baseless. When population growth, resource depletion, environmental pollution and the lack of modern technologies are factored in, China's food safety and security don't make a happy picture. The demand for food will continue to grow as the population increases and diets change with rising incomes. The prospect of foodgrain demand increasing to about 705 million tonnes by 2030 poses a major challenge to farmers, scientists, and policymakers.

Years of inappropriate land use have consumed a large amount of arable land and caused extensive soil erosion. Soil carried to the sea each year by China's rivers amounts to nearly five million tonnes of nitrogen, phosphorus and potassium, equivalent to the annual production of chemical fertilisers in China. This accounts for more than 8 per cent of the world's total fertile soil loss. The Loess Plateau alone suffers up to 40 million tonnes of soil erosion every year, worth 2.4 billion Yuan ( us $289 million). Some 158,000 sq km of the land area is on the verge of desertification. Once prosperous farming families in areas such as eastern Qinghai are now forced to subsist on very little as their cropland dries up in front of their eyes.

China has experienced an increase in the frequency and degree of damage caused by natural disasters. During each year of the 1980s, there was more than twice the number of disaster-hit areas than there were in each year of the 1950s. This wiped out more than 30 per cent of the country's crop productivity each year. Flooding in the summers of 1988 and 1999 along the Yangtze river and in northeastern China, which displaced hundreds of thousands of people and damaged tens of thousands of hectares of farmland, revealed just how vital water, soil, and forest conservation are to agricultural sustainability.

Scarcity of water and unbalanced water distribution also strain China's ability to produce food. The country ranks 88 in global per capita water availability, and the surface water in lakes and reservoirs has declined at the rate of about 325 sq km per year since 1954. Roughly 40 per cent of China's 86,000 reservoirs are inactive and cannot be used because of sedimentation and depletion. In the 1990s, part of the Yellow river has run dry every year, with the dry section extending 600 km from the mouth of the river to its upper reaches in Henan province. Many wells have been abandoned because of lowering water tables. With more than half of the population living in the north, long-term water scarcity on such a large scale has made food production difficult.

Food production also has been adversely affected by environmental pollution through misuse and overuse of fertilisers and pesticides. The world's largest user of fertiliser, China employs nearly three times more fertiliser per unit of farmland than the world average. Chinese agriculture is traditionally labour-intensive, relying primarily on livestock, recycled organic substances as well as crop rotations and soil-enriching leguminous green manure. Traditionally, organic manure and bacteria were used to fertilise plots. But chemical fertilisers are replacing this. The agriculture market and price reforms have more than tripled the use of fertilisers between 1989 and 1994. Chinese agricultural minister Chen Yaobang pointed out in 2000 that over the past decade, the volume of fertiliser used in China rose by 90 per cent, but the growth in grain output was less than 6.5 per cent.

China is seeking alternative policies and options to ensure its food security and safety. Besides measures to control pollution, conserve natural resources and provide technical training, the country is also moving towards eco-agriculture and adopting the framework of green food or organic food production. There are still many ups and downs China must go through in this arduous battle of food security and safety. In China, attempts to reduce the adverse consequences of pesticide use have mostly focused on managing or preventing poisoning, or toxic events usually associated with accidental spills during application or transportation. For instance, between 1985 and 1990, Shenzhen had 166 acute pesticide poisonings, affecting more than 5,000 people. Nationwide statistics from 1991 to 1997 counted 1303 such accidents, with a total of 25,472 affected people. Tests conducted in 1989 in 30 Chinese cities found worrisome levels of ddt and bhc residues in mother milk. An eight-year continuous monitoring of ddt level in mother's milk in Beijing estimated that it might take 15-20 years for the level to be lowered to the 1980s level in most industrialised countries.